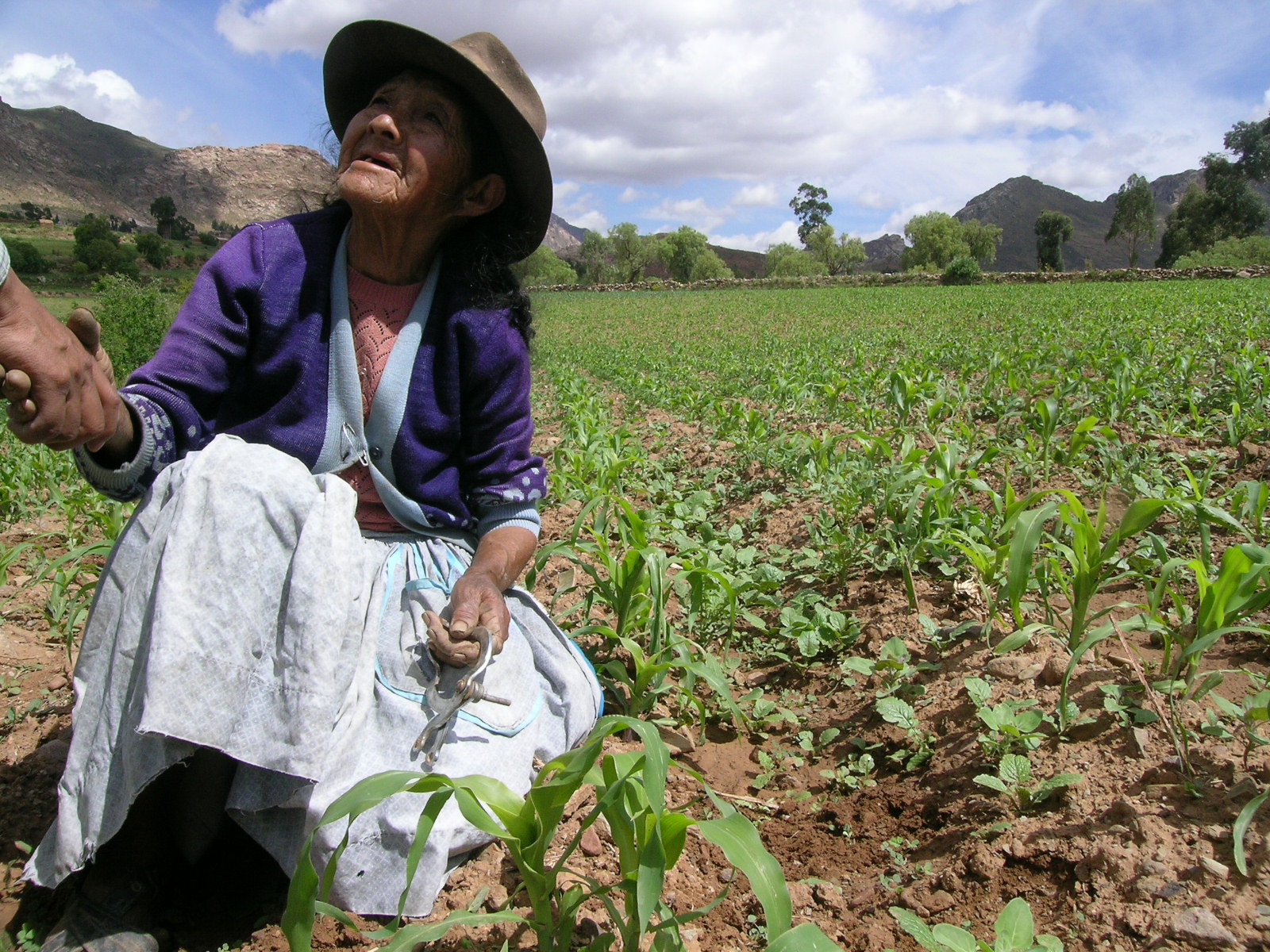 I took this picture of a farmer weeding maize in Mojotorillo, Bolivia back in 2005. A fresh look reveals things I didn’t see at the time. It also triggers warm memories of a day in the field that changed how I did my work. To me this is much more than farmer in a field. It tells a story that I’d like to share, one that illustrates the power of photos to reveal more than we have imagined. 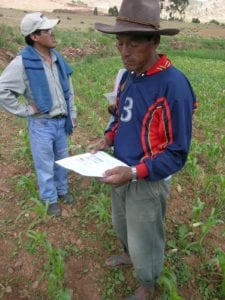 The composition is unusual, with the farmer off centre shaking hands with an unknown person. The person offering the hand is Wilson Ramirez, an agronomist who attended a writing course that I ran with Jeff Bentley, my long-standing collaborator and friend. Wilson had written a one page fact sheet explaining how to control aphids on broad beans. Jeff suggested that Wilson and the other guys on the course show their fact sheet to farmers and ask them what they thought of it. Jeff called it farmer peer review and was described in a later paper.

The composition is also accidental. I didn’t have much time to take the photo before the farmer stood up. Earlier that afternoon Wilson and I headed out into the fertile valley close to the course venue to talk to farmers. By the time we got to this place Wilson had already interviewed four farmers and received valuable feedback. Some wanted more information while others needed a clearer explanation. Farmer peer review is a brilliant way of understanding your audience and honing helpful extension messages.

I was impressed by the way Wilson approached farmers and got their attention. He was respectful and took time to explain what we were doing. While Wilson carried out the farmer peer reviews I took photographs, trying to be invisible. The great W. Eugene Smith spent his first week taking pictures of doctors in hardscrabble rural America without any film in the camera. As he became less obvious he was able to take the intimate and revealing shots that made a landmark photo-essay in Life magazine.

Wilson had an easy, relaxed manner. The handshake now takes on a deeper meaning. It’s an introduction as well as a sign of respect, a small gesture with a wider significance. A handshake says a lot about who you are. Get it wrong and the seeds of confusion are sown: too hearty a clasp, not firm enough, holding on for too long or releasing too early. Greeting people in different cultures is fraught with challenges. 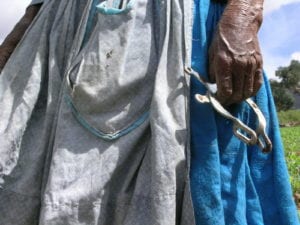 As Wilson introduced himself I knelt down and took out my camera. Fortunately it had a swing out screen, which meant I could hold it low down and be less intrusive. My eye was drawn to the instrument she was using to weed the young maize, held in her left hand. As I got closer I saw it was the calipers from a bicycle, the part that holds the brake blocks. It’s sturdy piece of metal and the two prongs enable you to dig under the roots. My fresh look at the photo makes me wonder how old she was and to question how effective her efforts were going to be in weeding a tiny patch of quite a large field. I think she’s at least 70 years old. I suspect she’s weeding out of habit and duty, her contribution to the family farm, making herself useful when there’s either not much else to do or because she likes being in the fields. It was a beautiful day and all around farmers were tending their crops.

I can’t be sure of any of this. The photo only provides so many clues and our encounter was brief. She politely declined to take part in the peer review exercise. The simple explanation was that the family didn’t grow broad beans. Maybe she was unable to read, although Wilson had read the fact sheet verbatim to two previous farmer reviewers. Whatever the real answer, the photograph is an example of the honest toil that farmers everywhere expend every day, and for this they have my enduring respect.

We subsequently used farmer peer review in other training courses and it always proved popular. Many agronomists and extension workers were surprised at what they learnt. A farmer in Kenya said the fungicide application details (for potato) were wrong. Another farmer in Nicaragua said that the author had left out a key symptom of powdery mildew on cucumber. The main drawback of farmer peer review is that it takes time. It works well on a training course, when you can set aside a period for the reviews. If you’re a busy extension agent working on your own – as many do – writing your own advisory fact sheets then showing them to farmers is asking a lot.