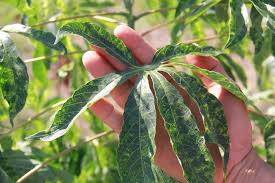 In the same manner that nations collaborate to detect and stop human pandemics, a global surveillance system for crop diseases needs to be created to safeguard agricultural trade and food security.

More than 20% of the five staple crops that provide half the globe’s caloric intake are lost to pests each year. Climate change and global trade drive the spread, emergence, and re-emergence of crop disease, and containment action is often inefficient, especially in low-income countries. A Global Surveillance System (GSS) to strengthen and interconnect crop biosecurity systems could go a long way to improving global food security, argues a team of experts in the June 28 issue of Science.

“As part of efforts to satisfy global demand for food – which could mean increasing agricultural production by as much as 70% by 2050 – we need a GSS to reduce food lost to pests,” said Mónica Carvajal, a researcher at the International Center for Tropical Agriculture (CIAT) and lead author. “A lot of collaboration and discussion is needed to rapidly take action and avoid outbreaks that could negatively impact food security and trade.”

Carvajal and colleagues hope the GSS framework they propose gains traction in 2020, which was designated International Year of Plant Health by the United Nations. The system would prioritise six major food crops – maize, potato, cassava, rice, beans, and wheat – as well as other important food and cash crops that are traded across borders. The GSS proposal is the result of a scientific meeting convened by CIAT and held in 2018 at the Rockefeller Foundation’s Bellagio Center in Italy.

In 2015, Cassava Mosaic Disease (CMD) was discovered in Cambodia but the findings were not reported until 2016. By 2018, the disease had spread to Thailand and Vietnam, and is now estimated to be present in 10% of the surfaces cultivated in the region, threatening millions of smallholders who cultivate cassava and generate US$4 billion in export revenue