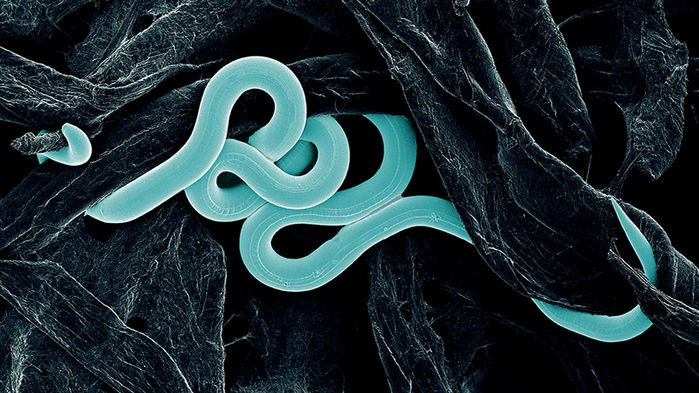 A mysterious disease is starting to kill American beeches, one of eastern North America’s most important trees, and has spread rapidly from the Great Lakes to New England. But scientists disagree about what is causing the ailment, dubbed beech leaf disease. Some have recently blamed a tiny leaf-eating worm introduced from Asia, but others are skeptical that’s the whole story.

Regardless of their views, researchers say the outbreak deserves attention. “We’re dealing with something really unusual,” says Lynn Carta, a plant disease specialist with the U.S. Department of Agriculture (USDA) in Beltsville, Maryland.

American beech (Fagus grandifolia), whose smooth gray trunks can resemble giant elephant legs, can grow to almost 40 meters tall. It is the fifth most common tree species in southern New England and in New York state—and the single most common tree in Washington, D.C. Its annual nut crop provides food for birds, squirrels, and deer.

Beeches in the United States were already struggling with a bark-infesting fungus when, in 2012, biologist John Pogacnik of Lake Metroparks, which manages natural areas in Ohio’s Lake County, spotted trees with leaves that were shriveled and had black stripes. By 2018, foresters had documented beeches with similar symptoms in 24 counties in eastern Ohio, western Pennsylvania and New York, and Canada’s Ontario province. Small trees with shriveled leaves were starting to die; on larger beeches, the symptoms crept up the tree toward leaves in the canopy. Worried foresters began to pry loose research funding from USDA and other agencies, and organized a meeting to discuss the disease in May 2018 in Parma, Ohio.

There, plant pathologist David McCann, of the Ohio Department of Agriculture in Reynoldsburg, said he had found thousands of wriggling worms streaming from infected beech leaves. He sent Carta samples of the worms, which can be up to 2 millimeters long. Carta identified the worm as a subspecies of Litylenchus crenatae, a nematode that is found in beech trees in Asia but doesn’t kill them. The find was eye-opening, Carta says, because no leaf-eating nematode is known to infect a large forest tree in North America.

Next, Carta, together with biologist David Burke of the Holden Arboretum in Kirtland, Ohio, and others, sought to verify Koch’s postulates—pathology’s gold standard for verifying a putative cause of a disease. The researchers took nematodes from diseased trees, pipetted them onto the buds of young, healthy trees in a greenhouse, then waited for symptoms to appear and reisolated the nematode from the affected leaves. The results of the experiment, which Carta presented at a conference in July and which have been accepted for publication in the journal Forest Pathology, indicate that “nematodes are causing beech leaf disease,” Burke says. “We feel like we’ve closed Koch’s postulates.”

Enrico Bonello, a plant pathologist at Ohio State University in Columbus, is skeptical. He and a graduate student, Carrie Ewing, have ground up leaves from diseased and healthy looking beeches and then extracted fragments of DNA and RNA. They found nematode DNA in both healthy seeming and diseased trees. In diseased beeches, they also found evidence of three bacteria and three fungi not found in healthy looking trees. They don’t know whether any of the microbes sicken trees. But Bonello says the finding, which he plans to present at an upcoming conference, “raises questions” about the role of nematodes. Perhaps, he says, the worms are simply transmitting a microbial pathogen that is the disease’s true cause.

Whatever its cause, beech leaf disease is getting around. Connecticut officials last month announced detections in Greenwich, Stamford, and New Canaan, on New York City’s doorstep. Diseased trees have also been found on Long Island in New York state, some 800 kilometers from the malady’s ground zero. Carta and others are investigating whether the nematode is being moved across the landscape by mites found on infected beech trees, or by birds.

USDA’s Animal and Plant Health Inspection Service, the agency responsible for dealing with invasive tree killers, is helping study the disease. But it has held off on taking action to limit the disease until it knows more about the cause and how it spreads.

The beech’s plight has dismayed forest experts, who are already reeling from an onslaught of introduced tree killers such as the emerald ash borer beetle that has eliminated millions of trees. “I think we should be alarmed,” says Robert Marra, a forest pathologist with the Connecticut Agricultural Experiment Station in New Haven. “What’s going to be left in forests?”

The beech may face additional threats. Earlier this year, U.S. Forest Service researchers announced they had found an undescribed beetle on stressed European beech trees in a New York City cemetery. The scientists are now studying whether the insect also has a taste for American beech.Posted in:

Gabriel Popkin is a journalist based in Mount Rainier, Maryland.