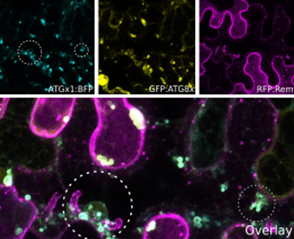 This is the report from a BSPP Incoming Fellowship.
Click here to read more/apply for one yourself.

Autophagy is a cellular catabolic process responsible for the degradation of self and nonself molecules. It has a central role in plant-pathogen interactions, being part of the plant defense mechanism and exploited by the pathogens alike. Many pathogens rely on effector proteins to manipulate the cellular response to their favor or to avoid the proper defense of the host. Such is the case of Phytophthora infestans which antagonizes defense-related autophagy by deploying PexRD54, an effector protein that carries a canonical ATG8 interacting motif (AIM) and outcompetes host autophagy cargo receptor Joka2/NBR1.

To study pathogen-activated selective autophagy, we employed a proteomics screen of PexRD54 and two different ATG8 isoforms from distinct phylogenetic clades. This revealed a group of candidate autophagy adaptors that specifically associate with PexRD54 and a particular ATG8 isoform. One of those being ATGx1.

We first evaluated the subcellular localisation of ATGx1 during P. infestans infection. For these we transiently expressed ATGx1 and ATG8x tagged with fluorescent proteins in Nicotiana benthamina leaves and observed their localisation with laser confocal microscopy. Remorine was used to visualise the pathogen’s haustoria. It was possible to detect subcellular structures containing both ATG8x and ATGx1 around the haustoria (Figure 1). In non-infection conditions, there was less colocalisation and the structures appear to be cytoplasmic.

We then decided to test if PexRd54 promoted the colocalisation between ATGx1 and ATG8x, for this we co-expressed ATG8x and ATGx1 with PexRD54. Our preliminary results suggest an increase in the colocalisation between ATG8x and ATGx1. Additionally, PexRD54 colocalised with ATG8x-ATGx1 punctua. To test if the interaction between PexRD54 and ATG8x was required for the increased ATG8x-ATGx1 colocalisation, we used an AIM mutant version of PexRD54. Our preliminary results indicate that there is a milder increase in the colocalisation, suggesting an AIM dependent and an AIM independent PexRD54 activation of this autophagic pathway. Interestingly, PexRd54 AIM mutants don’t colocalise with ATGx1. As a control we co-expressed ATGx1, ATG8x and the AIM peptide of PexRD54 (TAIL) which strongly bind to ATG8x and inhibits autophagy. As expected, this strongly reduced colocalisation (Figure 2).

Next, to evaluate that PexRd54 promotes the interaction between ATGx1 and ATG8x we pulled down ATG8x and quantified the amount of ATGx1 that co-precipitated via western blot (Figure 3A). Preliminary results indicate an increase in the amount of ATGx1 interacting with ATG8x in the presence of PexRD54.

To further understand the molecular bases of the activation of this autophagic pathway, we tested if PexRD54 interacts physically with ATGx1. For this we immunoprecipitated PexRD54 in both its wt and AIM mutant variants and did a western blot to evaluate if ATGx1 co-precipitating (Figure 3B). Our results show that there is no direct interaction between these 2 proteins nor that they form a strong complex.

This work allowed us to delve further in the understanding of the role of selective cargo receptors during P. infestans infection. Unfortunately due to the pandemic, we had to pause this research as I had to go back to my home country. I’m very thankful with the BSPP for their financial support of an an incoming fellowship and with Dr. Tolga Bozkurt and the other lab members for their support, scientific discussions and friendship. They are amazing human beings. 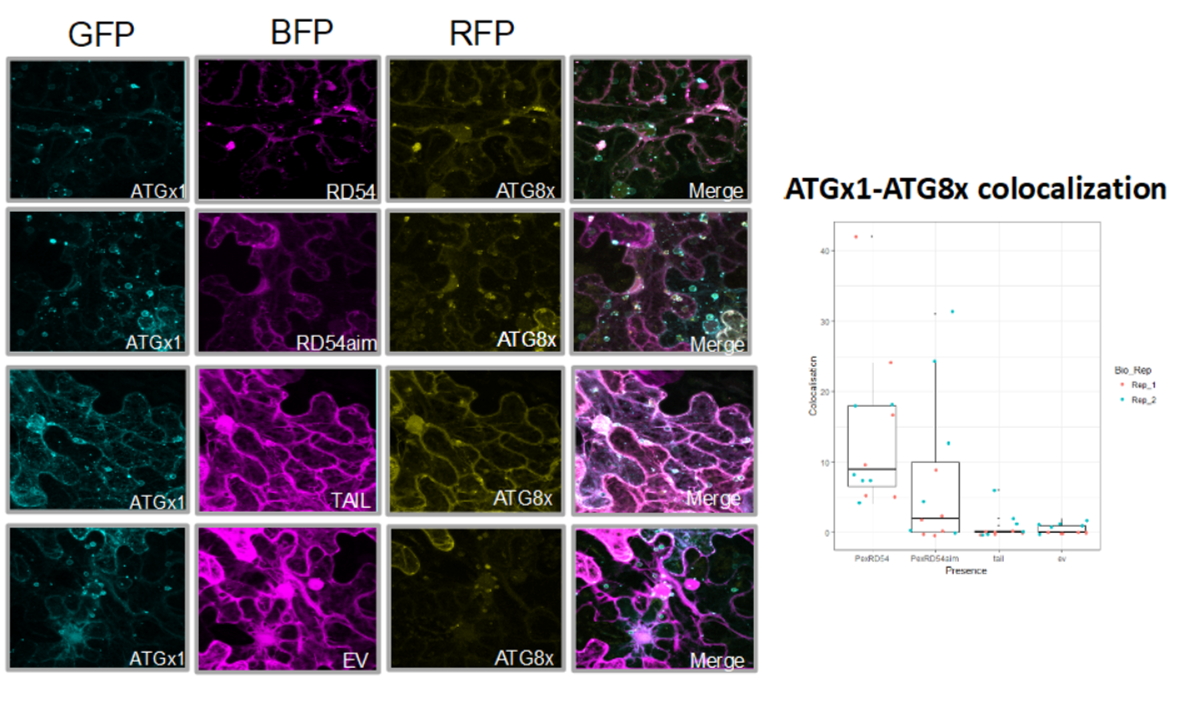