My MSc was conducted in the lab of Dr L. Bindschedler at Royal Holloway University of London, where I aimed to elucidate the relationship of powdery mildew with its barley host. Powdery mildews have relevance to many crops grown in the UK, including cereals, affected by Blumeria graminis. These fungi are obligate biotrophs, having a parasitic relationship with their host and thus only obtaining nutrients from living tissues. Nutrient uptake is facilitated via haustoria, which are highly specialised feeding structures that are found in many biotrophic pathogens. Haustoria emerge from a penetration peg that has punctured the wall of a leaf epidermal cell, but without perforating the host plasma membrane. The region of plant plasma membrane that surrounds the haustorium is denoted as the extra-haustorial membrane (EHM), and is in continuity with the remaining plant plasma membrane. The two membranes, the fungal haustorium membrane and the plant EHM, are in close proximity, separated only by the extra haustorial matrix, across which a secretory warfare is conducted.

Genomics and transcriptomics data sets have been published in order to determine B. graminis virulence strategies, identifying over 500 candidate secreted effector proteins. This was complemented by proteomics data published by Bindschedler et al. (2011) to unravel 67 Blumeria effector candidates (BECs) identified as “haustoria only” proteins, of which 8 have been validated as virulence factors. At least some of these BECs are suspected to have activity within the epidermis, but little is known about their mode of action at the plant-fungus interface. It was previously demonstrated in other plant-biotroph pathosystems that the EHM might harbour plant susceptibility (S) genes. Bozkurt et al. (2014) noted that the tomato protein REMORIN 1.3 was recruited to the peri-haustorial plant membrane during Phytophora infestans infection. Silencing of REMORIN 1.3 in these tomato plants correlated with increased resistance to the oomycete. We predicted that in barley, similar S gene products might associate to the EHM or within the matrix, upon infection with Blumeria graminis f.sp hordei (Bgh).

In order to enrich for haustoria-EHM complexes (H-EHMc), a protocol was optimised: Epiphytic hyphal tissue was removed from barley leaves; leaves were blended, followed by differential filtration and centrifugation. Samples were monitored by microscopy to evaluate the presence of ca. 300,000 haustoria in successful preparations. Haustoria were also isolated from infected barley epidermis as an alternative to whole infected leaves. These samples were used for mass spectrometry based proteomics analysis using a shotgun approach, coupling nano-liquid chromatography with nanoelectrospray tandem mass spectrometry (nLC-nESI/MSMS). It allowed the identification of ca. 2500 barley proteins. Using a comparative approach, 225 proteins were detected specifically in infected epidermis, being absent from non-infected epidermis, while 185 proteins were detected as being exclusive to the H-EHMc enriched fraction. The study also allowed the identification of 476 Bgh proteins in the H-EHMc samples.

The protein IDs from this first set of samples were then manually examined for GO terms, as no systematic annotations were available for the barley predicted proteome. Infected epidermis and H-EHMc samples showed a 3.5 fold increase in the presence of proteins related to reactive oxygen species or redox homeostasis when compared to their respective controls. In H-EHMc, an 18 fold increase in the number of proteins associated with stress hormone signalling was seen, mainly represented by LRR-kinase proteins, abscisic acid receptors and jasmonate induced proteins. A 7 fold increase in Pathogenesis-related (PR) proteins was seen exclusively in the H-EHM, with only a modest increase in infected epidermis. The PR protein group included dirigent proteins, glucanases, glucosidases, galactonureases, lipases, chitinases and xylanase inhibitors. An 8 fold increase in identified cell wall and membrane regulating proteins was seen in H-EHMc: 48 were identified in H-EHMc while only 3 were identified in the infected epidermis. Of these 48, many were predicted to be proline-rich cell wall proteins, involved in pectin, lignin and lignan biosynthesis. Lignin is commonly considered to be a mechanical barrier restricting the invasion and/or subsequent spread of colonizing pathogens and toxins they produce. The localisation of these proteins to the H-EHMc suggests that they may be acting as positive regulators of disease resistance to Bgh. 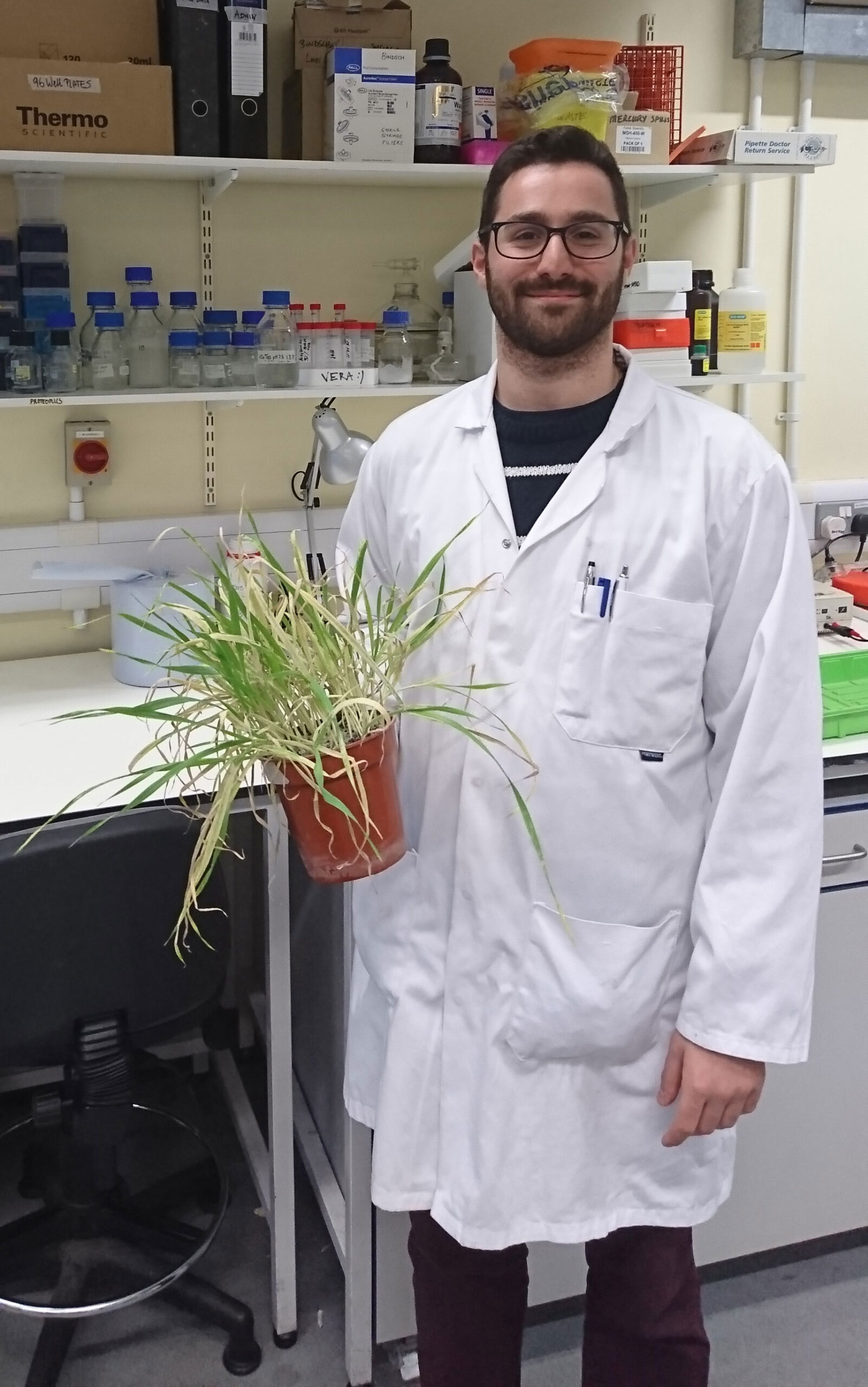 Sebastien with an infected barley plant

Amongst the proteins specifically detected in the H-EHMc samples, were a family of highly conserved, Ca2+-dependent membrane lipid-binding proteins. Loss of function or knock down mutants for homologues of these genes in Arabidopsis or wheat have been reported to confer increased disease resistance to Pseudomonas syringae pv. tomato (P.s.t) and Hyaloperonospora parasitica, a haustoria forming biotrophic oomycete. These lipid-binding proteins have been shown to be negative regulators of disease resistance, whose function might now be associated with the H-EHMc, according to this study.

My preliminary MSc results suggest that this differential proteomics approach to describe the H-EHMc proteome is likely to lead to the discovery of proteins involved in resistance or susceptibility. This is initially demonstrated by the enrichment for relevant keyword categories, involved in pathogen response, hormone and signalling, and cell wall biosynthesis. A quantitative approach will improve the differential analysis, and will be further investigated during my PhD project. Several interesting candidate proteins require further investigation to establish their putative involvement in resistance or susceptibility. This will contribute to the understanding of the key players involved in the interaction between the barley host and its powdery mildew, and help to control the disease in the future.

I would like to thank Dr Bindschedler and the BSPP for introducing me to the exciting world of plant pathology. BSPP funding contributed significantly to the cost of analysing my data, and allowed me to acquire proteomics skills which are highly sought after. Currently I am undertaking a PhD within the same group at Royal Holloway, a position I was able to secure only with the support of both parties. I have since presented my MSc data as a poster at a proteomics conference in November 2017. I am excited to continue investigating plant-powdery mildew interactions, and hope I can make great contributions to this field in the future.