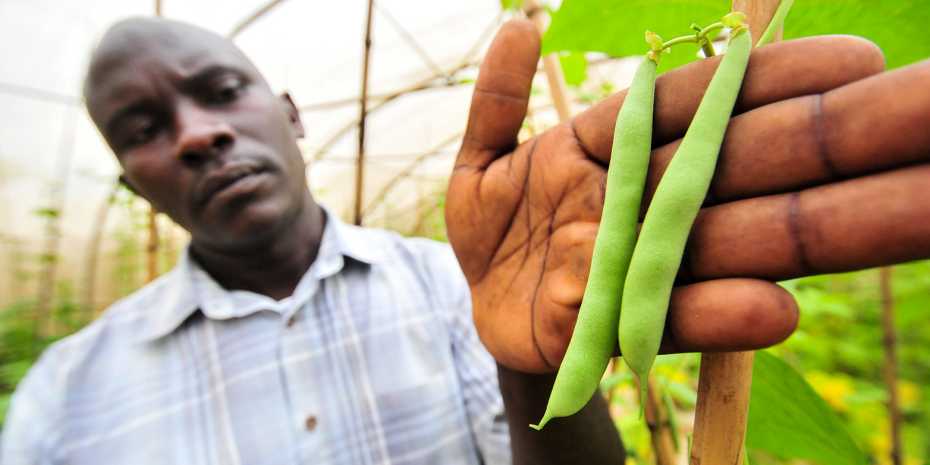 ETH researchers are involved in the development and implementation of a method to efficiently breed for disease-resistant beans in different regions of the world. Their work will help to improve the livelihood and food security of smallholders in developing countries.

For many people in Africa and Latin America, beans are an important staple. Historically described as “the meat of the poor”, beans are rich in protein and minerals, affordable and suitably filling. That is why they are served daily, often with several meals.

In many regions, however, plant diseases severely reduce bean yields. For example, the dreaded angular leaf spot disease can cause yield losses of up to 80 percent – especially in Africa, where smallholders rarely have the opportunity to protect their crops with fungicides.

Working with Bodo Raatz and his team at the International Center for Tropical Agriculture (CIAT), ETH researchers from the group led by Bruno Studer, Professor of Molecular Plant Breeding, investigated the resistance of beans to angular leaf spot disease. Their findings are now enabling disease-resistant bean varieties to be bred more rapidly and selectively for the world’s various bean-producing regions.

Their method is built upon genome analyses of those beans that are potentially suitable for breeding new, resistant varieties. The resulting genetic profiles provide information as to whether the progeny from crossbreeding two varieties will be resistant to the pathogenic fungus’s different, locally occurring strains (known as pathotypes).

Michelle Nay, who carried out the project as part of her doctoral thesis in Studer’s group, started by gathering as many different bean seeds as possible from CIAT’s seed repository. In total, she collected 316 different varieties that displayed characteristics suitable for breeding resistance to the fungus that causes angular leaf spot disease.

Next, Nay planted the beans from her collection in Uganda and Colombia, both in greenhouses and in the field. Her aim was to find out if and indeed how the different varieties react to the fungus’s various pathotypes in each country, and then to identify the genetic basis of disease resistance.

Nay also created a high-resolution genetic profile for each of the 316 bean types based on variations in their DNA known as genetic markers, and identified which markers occurred only in the disease-resistant beans. She subsequently used these markers to predict which progeny would be resistant to which pathotypes in a given country, and which ones would be susceptible to disease.

“Our method speeds up the breeding process considerably,” Studer says. It’s a big step forward because crossbreeding had previously been a numbers game and involved testing every single plant for its resistance, he explains. Now, on the basis of a genetic test, it is possible to predict a plant’s resistance without testing it in laborious field trials. “This is a huge help in bean breeding and great news for people who rely heavily on beans as a staple of their diet,” Studer says.

The group’s work to provide disease-resistant beans will also help to cut down on global pesticide use. As things stand today, Studer explains, fungicide use is common for bean cultivation in Latin America, but almost non-existent in Africa because many farmers don’t have access to pesticides, or don’t know how to use them safely and efficiently: “Disease-resistant beans are a double win: famers in Latin America can reduce their pesticide use while farmers in Africa can increase their crop yield pesticide-free.”

CIAT distributes the seeds from this project to various sub-organisations who then supply them to breeders. The analytical method for determining genetic markers is relatively simple and inexpensive to apply, making it viable for use in agricultural laboratories in the countries concerned. It costs less than 0.2 CHF to test a genetic marker, Nay explains, which is an affordable amount for laboratories in less affluent countries. What’s more, all the findings from this study are available through open access. “This way, our work reaches the people who really need these kind of resources,” Nay emphasises.

Nay and Studer worked on this project in close collaboration with CIAT. The global research centre runs the largest breeding programme in the tropics and has several thousand varieties of bean in its seed repository. At its headquarters in Colombia, CIAT breeds new bean varieties, tests the seeds, and, in partnership with the Pan-Africa Bean Research Alliance, makes the seeds available to farmers for cultivation.

In collaboration with CIAT and supported by the World Food System Center at ETH Zurich, Studer and his group will now conduct a follow-up project to refine their breeding method. While the researchers previously focused on markers for one specific disease, the new project will take a more holistic approach as they attempt to use such genome profiles to predict as many plant characteristics as possible.

This research has been supported by the Sawiris Foundation for Social Development.