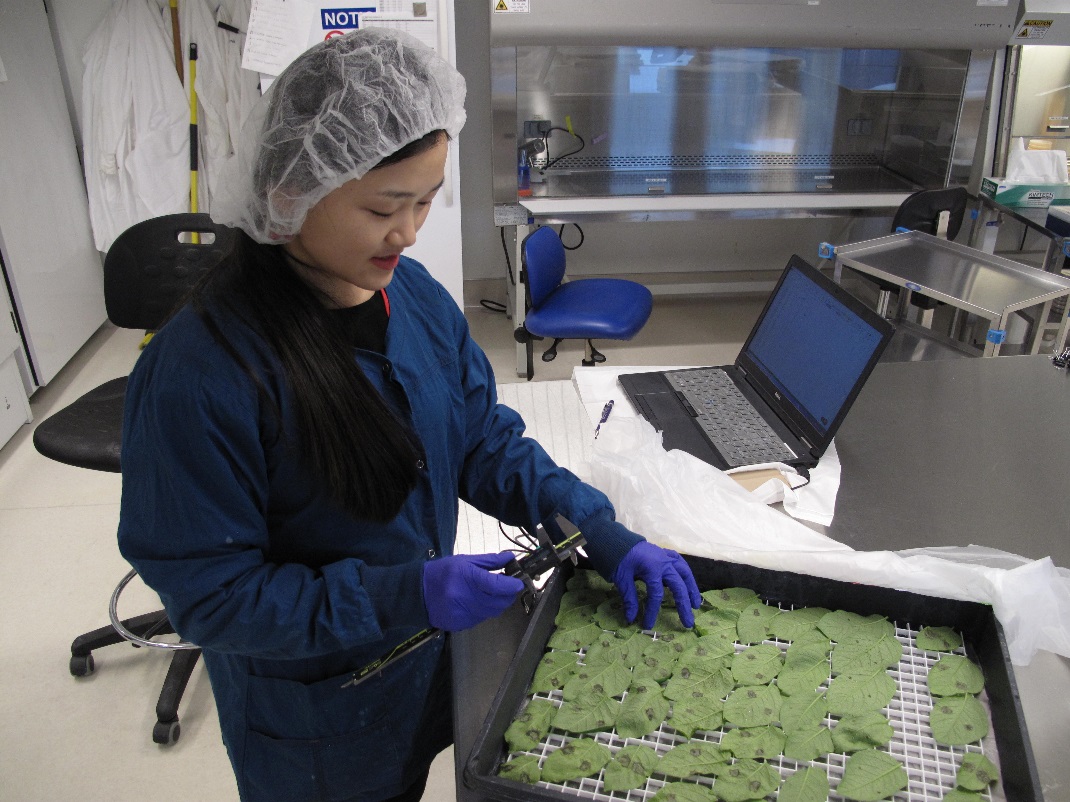 Written by Qin He at the University of Dundee. This is the report from a BSPP Senior Fellowship. Click here to read more/apply for one yourself.

For the last three years, I have been studying for my post-doc with Professor Paul Birch at University of Dundee based at James Hutton Institute looking at undermining effector-targeted susceptibility factors to provide late blight resistance.

During this time, we have established the collaboration with the Plant Science department in the potato biotechnology company JR Simplot in the US who are the world-leaders in terms of adopting biotechnology applications to improve potato varieties. Simplot have shown great interest in exploring new approaches to provide late blight disease resistance, given the vulnerability of breakdown in resistance provided by major resistance genes. As crop diseases represent a serious global threat to food security. A major constraint to achieving food security is crop loss due to pests and diseases; up to 50% of crop losses in developing countries are due to these causes. Phytophthora infestans causes late blight, a major disease on potato. The global population of P. infestans constantly changes, ensuring that late blight continues to be an ongoing threat to global food security. There is thus an acute obligation to find new and durable means to combat crop diseases. P. infestans is able to suppress immunity and establish disease through delivery of RXLR effectors inside host cells. Those effectors exploit a range of mechanisms to manipulate host immunity. Generally RXLR effectors target host proteins to manipulate plant immunity. Identification of the targets of effectors in the host is essential to understand pathogen virulence and plant susceptibility.

Many RXLR effector targets have been identified. For example, many are positive regulators of immunity whose activity is suppressed by the effector. For example, the RXLR effector SFI3 targets a host ubiquitin-kinase protein (StUBK) to suppress early immune transcriptional responses. In contrast, some targets either negatively regulate immunity or otherwise support a compatible interaction that benefits the pathogen, which are regarded as susceptibility (S) factors. In this study, effector Pi02860 utilises E3 ligase NRL1 to degrade the immune regulator SWAP70, providing the first mechanism for how oomycete effectors exploit S factors utilizes a host Cullin3-based E3 ligase StNRL1 to promote disease. In addition, PP1c isoforms also act as S factors as their activity is required for late blight disease development. A deeper understanding of how those host targets are perturbed by pathogen effectors will help the potential to develop new and durable resistance strategies. This is the objective of my current post-doc position.

In my study, the StUBK is a positive regulator of plant immunity that targeted by effector SF13. We have further discovered that SFI3 is unable to interact with the Arabidopsis counterpart of UBK (AtPUB33). Transfer of amino acid polymorphisms from AtPUB33 to StUBK would undermine activity of effector SFI3. In contrast, the E3 ligase NRL1 and phosphatase PP1 function as susceptibility (S) factors that negatively regulate plant immunity, and their activities are required for late blight infection. S factors present very attractive opportunities to undermine infection processes. If silencing of PP1c isoforms or NRL1, or reducing the activity or availability of PP1c or NRL1 enzymes, could attenuate P. infestans infection that would provide a new means to attenuate late blight disease.

Following discussions with JR Simplot, who are looking for new modes-of-action to prevent late blight, the transformation team in Simplot has transformed the constructs we sent them into commercial US potato varieties (Atlantic) to either overexpress AtPUB33 or silencing NRL1/PP1c. I am keen to evaluate whether those transgenic lines that aim to silence key S factors or overexpress AtPUB33 that I am working on lead ultimately to more durable resistance to late blight. I am also curious to discover what industrial research is like in comparison to academic research, and to formulate collaborative contacts that could benefit my research career in the future. With the help of a BSPP Senior Fellowship Award, I was able to travel to Boise (Idaho, USA) and work with our collaborators for three weeks which has made a rewarding and productive experience and time.

With the help team members in the Plant Science department in JR Simplot, especially Carolina, the experiments were well scheduled there. The transformation team has selected ten best transgenic plants for each based on their qPCR results. Carolina helped plant two waves of those transgenic lines and looked after them in the greenhouse. They were six-week old that were ready to go when I arrived there. We have used four different controls for P. infestans assays, the varieties (RR/p4346-8 and At/p4346-22) which contains resistance gene Vnt1, the transformed empty vector At/p401-1 and the untransformed wild type Atlantic. The P. infestans isolates selected for this bioassay are Pi88069 and US-23. Carolina also helped recover the two isolates on rye agar at 19°C and sub-cultured 20 plates for two waves, which would be 12-14 days the time we used them. I also sent her a detailed description of the experimental design which helped her to have everything ready and organized when the time came. Once we agreed the dates of the main activities that helped me to map when it could be a good time to be there.

We did two replicates for the P. infestans infection assay with those plants. There are slight differences in the infection protocol between the two labs. However, we used our protocol and experiment setting up in Paul Birch’s lab back here in the James Hutton Institute. The main difference of the assay is that we inoculate the detached leaves with P. infestans drops rather than spray the whole plants. We chose the best three compound leaves for inoculation (normally the 3th to the 5th compound leaves if count from the top leaf). Totally there were 20 transgenic lines, four controls and two P. infestans isolates has been used. We stored those detached leaves on moist tissue in sealed boxes. We have used 16 trays and each tray had 3 transgenic lines and 4 control lines with six detached leaves of each line. The other difference in protocol is the method we prepare the suspension of P. infestans spores. The P. infestans plates were ﬂooded with 5 ml H2O, and scraped to release sporangia. The sporangial suspension was poured into a Falcon tube, and sporangia numbers were counted using a haemocytometer then adjusted to 40,000 sporangia per ml for 88069 and 70,000 per ml; 10 ml droplets were inoculated onto the abaxial side of detached potato leaves stored on moist tissue in sealed trays. All the trays were stored in the incubator at dark in the first 24h at 19 °C and 16 light/8 dark for the rest few days. We could see the infection on the leaves 2 days post inoculation (dpi). Disease development was recorded from 5dpi. We have taken photos for all the trays and the representative leaves. The disease symptoms were recorded as lesion diameter and sporangia that recovered from the lesions.

The P. infestans infection worked well. We could see big lesions on the Atlantic and At/p401-1 negative control leaves. However there was not much infection on the RR/4346-8 or At/p4346-22 lines because of the resistance that provided by Vnti gene. We have measured the lesion diameter and counted the sporangia from lesions. For NRL1/PP1c lines, there was variation of infection among these lines. But we have selected three good lines showed reduced infection from the combined date form the two replicates. However, given the short amount of time allocated, it would be better if we could test those lines for P. infestans infection for more replicates and confirm the qPCR for checking the silencing level. Because those lines could not consistently reduce the infection in both replicates. It might also due to the different insertion sites of the silencing construct. For AtPUB33 lines, the result was more encouraging. Five of AtPUB33 transgenic lines consistently showed slightly but significantly reduced P. infestans colonization. Based on the qPCR results, it seems there was a correlation in AtPUB33 expression with those lines showed reduced infection. So it would be great if the transformation team in JR Simplot could confirm the expression level by qPCR again, we would be more confident of our results. So we keep contact with our collaborator JR Simplot for the follow up experiments to finish.

During my stay there, I also joined their lab meeting every Thursday. There were normally one or two speakers to give a presentation. They were very nice and interesting talks, which helped me to know what it is like to be a researcher in industry. The mission statement is to bring earth’s resources to life. With a deep respect for the environment and recognizing the challenge of the world’s growing population, Simplot brought together uniquely qualified individuals to form a group dedicated to finding better ways to grow delicious, safe and abundant food for people throughout the world. Combining the extensive experience in agriculture with the latest in biotechnology, the Simplot Plant Sciences team developed Innate® Technology, an innovative biotechnology platform for improving crops. This new biotechnology process results in tangible improvements in crops that leads to better foods and ultimately, more sustainable crop production. Through Innate® technology, Simplot has developed potato varieties that address several of the major issues facing the potato industry including cold storage, late blight, sugar ends, sprouting, acrylamide and black spot bruise – providing significant benefits to the entire potato value chain.

I would like to thanks BSPP for awarding me with this opportunity as it has greatly helped me to develop skills in modeling and interacting with people as well as to make connections or collaboration for the future, which is particularly important for me in my career as an early stage scientist. Because it was very important to improve my academic experience. I also would like to thanks Simplot for hosting me and for ensuring I had a rewarding and productive experience and time. The Pathologist team members helped me a lot, especially Francisco Bittara Molina who is the senior scientist in the phytopathology team. We had pretty nice conversations and brainstorm about the phytopathology work. And thanks very much Craig Richael, the director of Plant Science in Simplot, for taking care of me and making arrangements for my arrival. I appreciate it very much. This makes me feel more confident that I want to contribute to the scientific knowledge and built the impact in the world. Thank you!

Carolina, Francisco, Craig and Qin having a meal together the day before her return to the UK 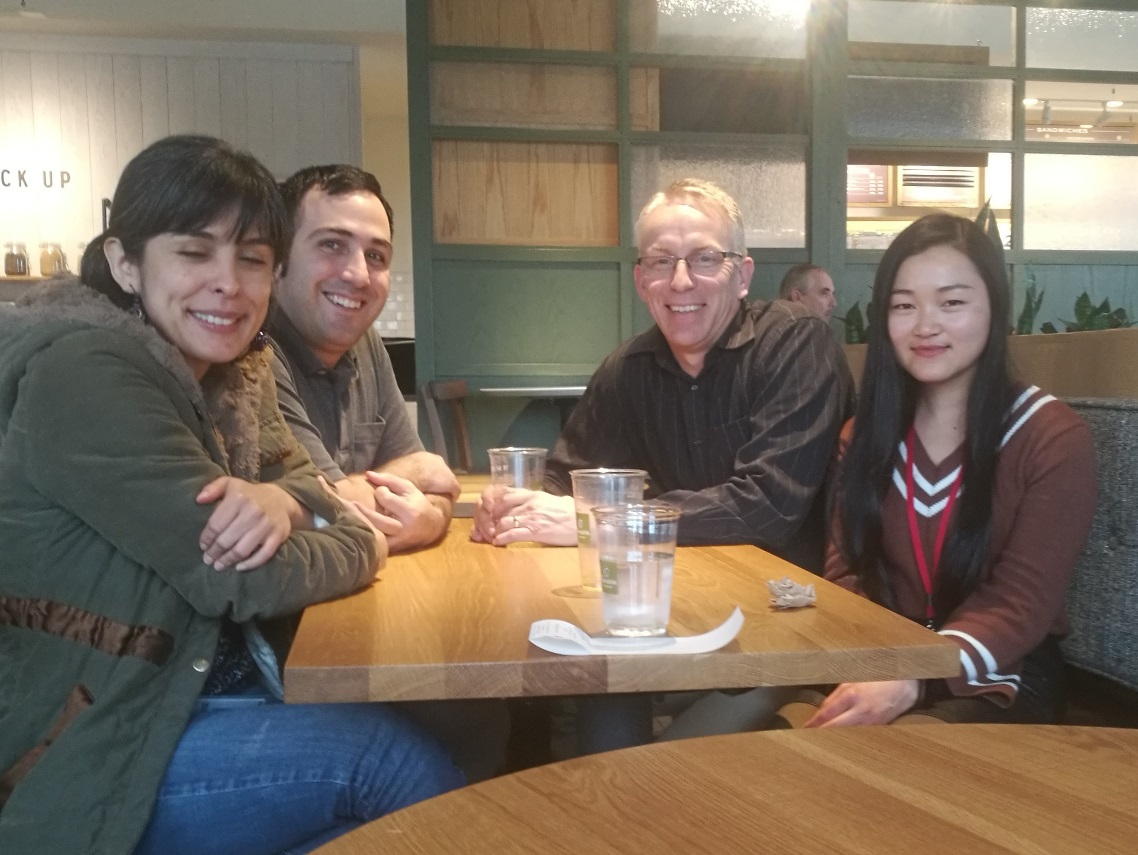 Qin at the reception in the plant science lab of J.R Simplt 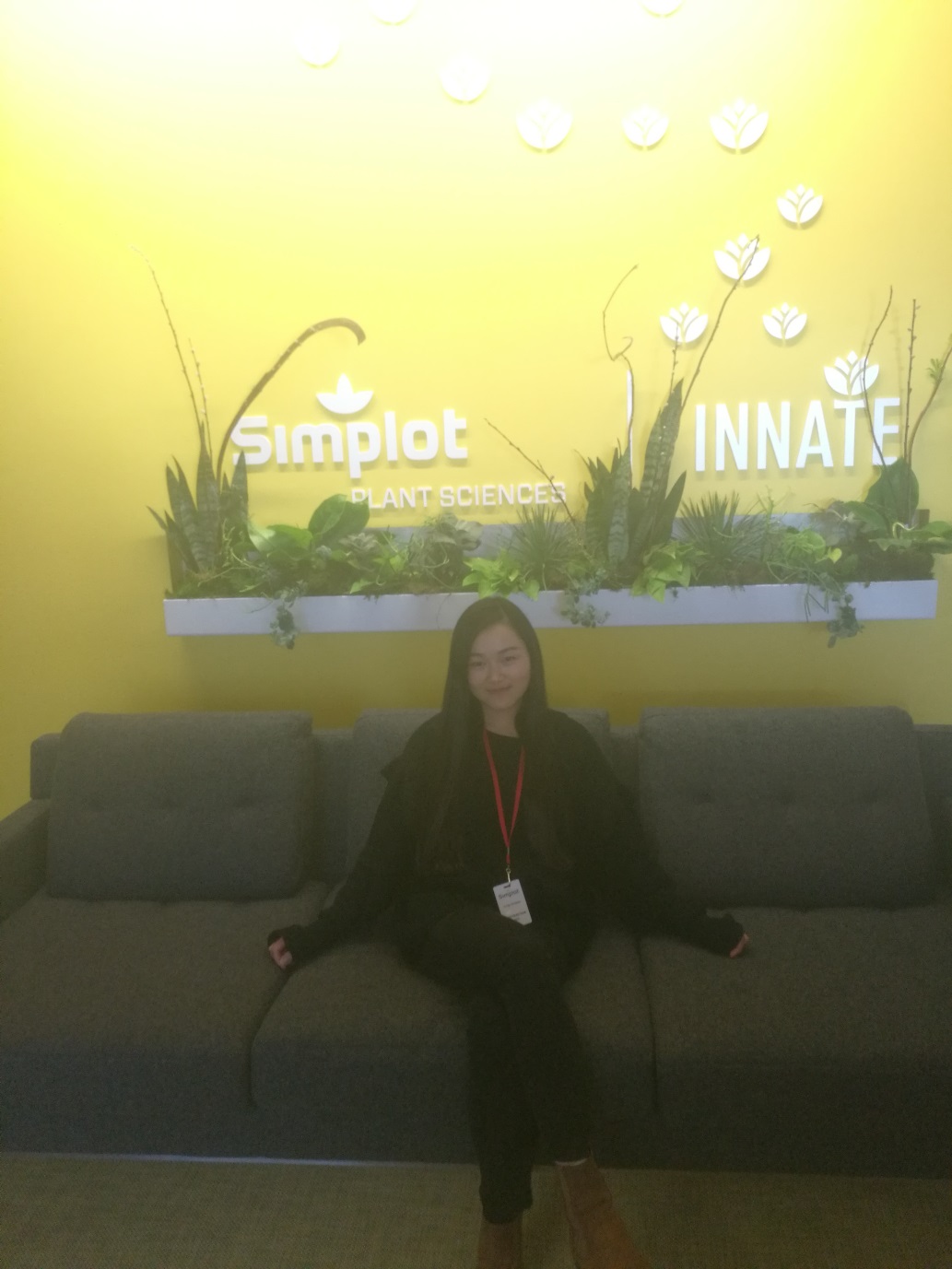