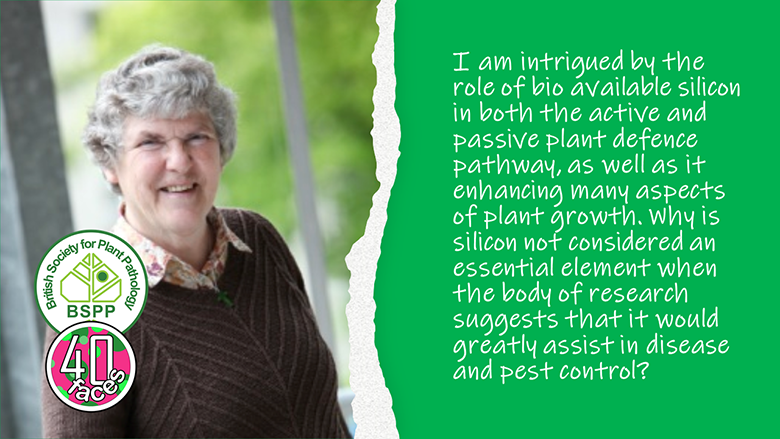 Avice Hall is one of our ’40 Faces of Plant Pathology’

I am a Plant Pathologist , and also a University Lecturer. My lecturing covers mycology (including a little medical mycology) fungal ecology and plant diseases both of crop plants but also in semi- natural plant communities. My aim is to inspire students (undergraduates and postgraduates) to become plant pathologists and contribute to solving some of the world’s food problems. There is no point medical science enabling everybody to be healthy if there is not enough food for them. Since 2003/4 my research has concentrated on protected strawberry production including sustainable control of strawberry powdery mildew, using decision support systems and silicon nutrient. My early training in the 1960s encouraged me to always consider the needs of the growers and it has been a great pleasure to work with strawberry growers and to see how applied plant pathology can contribute to sustainable fruit production in challenging times. I am also privileged to have served on the BSPP Board twice, once as an elected member and then as Secretary. The BSPP ( and it’s for runner, the Federation of British Plant Pathologists) has played a major role in my career development particularly in the years when I was the only Plant Pathologist in my institution.

I studied at the University of Leicester where I did combined honours, Botany and Zoology, mycology was taught but no plant pathology but a lecturer recommended ‘The Advance of the Fungi’ by E.C. Large, and I discovered Plant Pathology. I was the fortunate the do the MSc in Plant Pathology at the University of Exeter,( where I found that compared with Exeter graduates I knew no plant pathology!) followed by a PhD on Plasmodiphora brassicae. I also had a summer job at NAAS , Woodthorne, Wolverhampton where I was trained that giving timely, appropriate and acurate advice to growers was essential. I was also privileged to take part in assessing some of the first fungicide trials on cereals.

I am intrigued by the role of bio available silicon in both the active and passive plant defence pathway, as well as it enhancing many aspects of plant growth. Why is silicon not considered an essential element when the body of research suggests that it would greatly assist in disease and pest control?

Improve education and equality in Plant Pathology for women worldwide.

Probably a post harvest pathologist (if that counts) or bio deterioration specialist. I like the investigative element .

This is a very significant step forward - the first sowing of GE field trials under the new Qualifying Higher Plants (QHP) rules. No fences, no permits. Just science-based regulation to enable innovation. Thanks to @Jochurchill_MP and all at @DefraGovUK for making this happen. https://twitter.com/Rothamsted/status/1529729532026044417