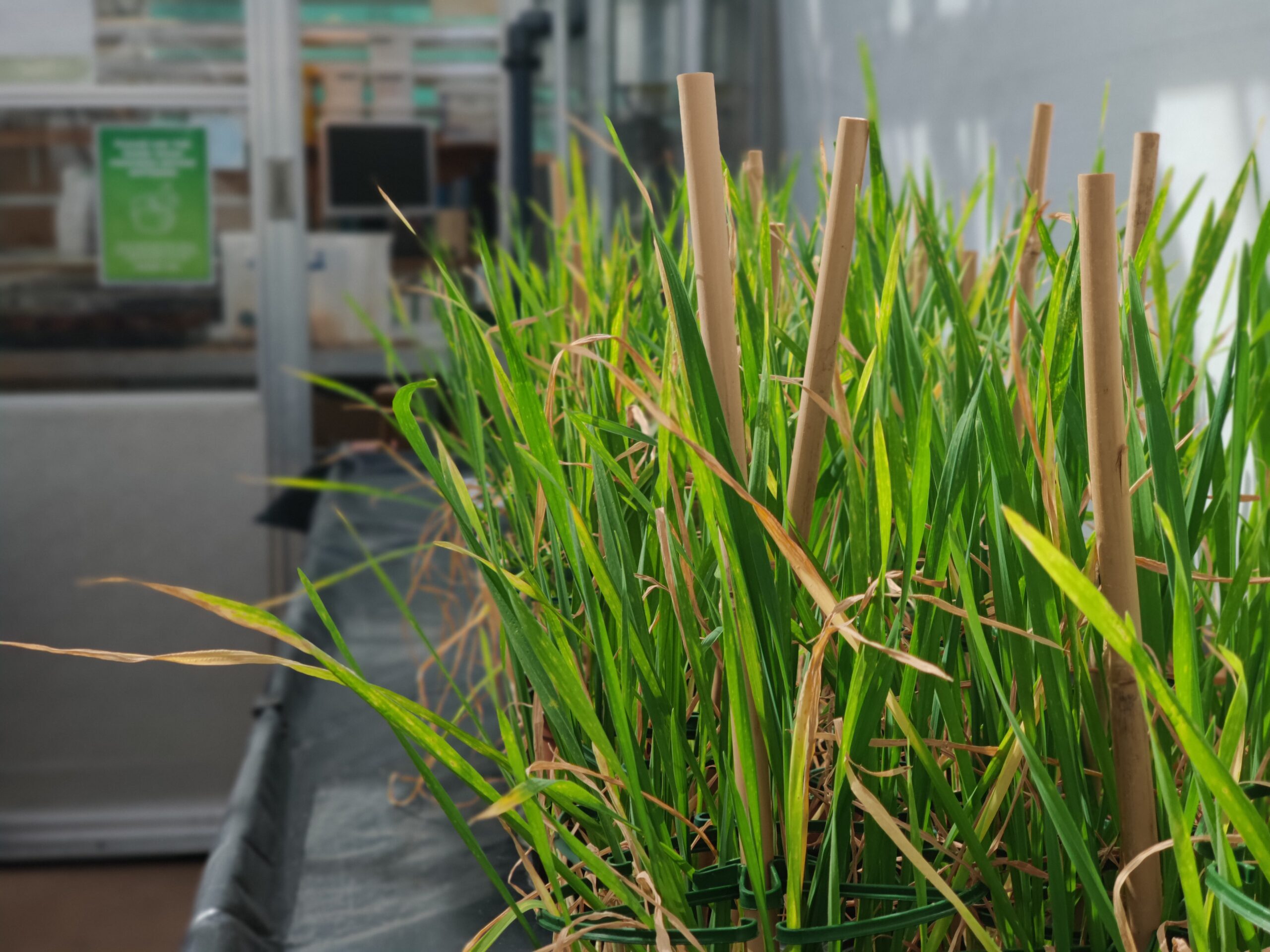 Written by Xiangming Xu at NIAB EMR. This is the report from a BSPP Senior Fellowship. Click here to read more/apply for one yourself.

With the BSPP senior fellowship grant, I travelled to China twice, one in late August 2015 and the other in mid-March 2016, working with Prof Xiaoping Hu of Northwest A&F University (NWSUAF) on the biology and epidemiology of wheat rust, caused by Puccinia striiformis f. sp. tritici, Pst. Both trips were also partially funded by Northwest A&F University. The main objective of the visits was to complete several manuscripts on Pst biology and epidemiology and to plan future work on Pst population genetics to infer the dispersal routes.

Wheat stripe rust is one of the most important diseases of wheat worldwide. Annual cycle of wheat stripe rust can usually be divided into four stages: oversummering, infection of seedlings in autumn, overwintering, and spring epidemic. The severity of rust epidemics in spring usually determines the extent of crop yield losses. Oversummering and overwintering are two bottlenecks for Pst epidemic development. As an obligate parasite, Pst has to overwinter and oversummer in living host tissues. Temperature is an important factor influencing Pst development, including its survival during the winter. Previous findings regarding the effect of environmental factors on Pst overwintering were based on field observations, which reflects the overall effects of many external factors on Pst overwintering.

Studying Pst overwintering is hampered by the inability of assessing the amount of fungal biomass and its viability in wheat leaves efficiently. Recent development in PCR technology has enabled rapid detection and quantification of pathogens in plant tissues. The amount of Pst in leaves in early stages of infection prior to visual symptoms can be quantified using real-time quantitative PCR (qPCR) of DNA. Usually, DNA can remain intact for a longer period of time after cell death than RNA, which can be easily degraded by ribonuclease. RNA is expected to be a better choice over DNA as an indicator of metabolic changes in response to external factors, hence indicating the viability. Recently, the research group led by Prof Xiaoping Hu of NWSUAF developed a real-time PCR method quantifying Pst RNA (cDNA). Using the qPCR-RNA tool, Prof Hu and his team have completed experiments on the Pst survival inside wheat leaves under different constant temperatures, and also studied Pst survival over winter at many sites.

In a previous publication we showed that Pst mycelia inside green leaves can be killed by low temperatures rather than through death of green leaves under low temperatures and that the relationship of Pst survival in attached leaves with temperature and winter-hardiness can be well described by logistic models. To further study overwintering survival of Pst under natural conditions, we conducted experiments Pst overwintering across several sites in regions close to or further away from the current Pst ‘overwintering boundary’ in China over two years (as determined from past field observations). Plants with Pst symptoms and uredinia were tagged in late autumn and moved to laboratory in early spring the following year for quantification of Pst biomass via a qRT-PCR method and for assessment of Pst symptoms and sporulation after incubation in a greenhouse. The qRT-PCR method detected Pst in leaves and sheath in most samples, much greater than the observed incidence of Pst symptoms and sporulation after incubation. Further refinement may thus been necessary to calibrate this molecular method in order to avoid overestimating Pst overwintering potential.

Results indicated that Pst overwinters in young green leaves as latent infection established in late autumn. Active sporulation (hence successful overwintering) was observed for all sites except one. Increasing altitude led to decreasing incidences of visible Pst symptoms and sporulation. In addition to lower temperatures in high altitudes, wind-chill may also explain this negative relationship between Pst overwinter potential and altitude. These results suggest that using temperature only to predict overwintering potential of Pst at a given site is insufficient for mountainous regions; we need to consider factors such as altitude, snow cover, and wind-chill, in addition to temperature. Furthermore, the results also indicated that the current classification of ‘overwintering regions of Pst’ in China based on the temperature thresholds inferred from field observations is likely to result in considerable errors in predicting Pst overwintering, particularly in mountainous regions. This manuscript was recently accepted for publication.

Effect of controlled fluctuating low temperatures on survival of Pst

In parallel with the field study on overwintering of Pst (see above), Pst survival in infected wheat seedlings under several fluctuating temperature regimes was also studied under controlled conditions. There were three average temperatures (0, -5 and -10°C), each with two daily fluctuating amplitudes (8 and 13°C); within each 24 h period, there were 16 h day time and 8 h night time. Pst biomass was quantified with a qRT-PCR method at several time points. The survival of Pst increased with increasing average temperature but also varied greatly with the amplitude – larger amplitude led to lower survival, particularly at 0 and -5°C. Nevertheless the survival at both amplitudes was still significantly greater than under the corresponding constant temperatures. The temperature treatment accounted for most of the observed variation (ca. 64%). The differences in Pst survival between three amplitudes (0°C, 8°C and 13°C) also accounted for 20% of the total variation. Average survival was 12%, 28% and 18% for the amplitude of 0°C, 8°C and 13°C, respectively. The greater survival under fluctuating conditions at average 0°C might also partly result from the fact that Pst biomass could increase when temperature > 0°C during daytime. This study indicated potential errors that could result from using daily average temperatures to predict Pst survival during the winter. A manuscript describing the result is currently being evaluated for publication.

Genetic structure of Pst in China

China is one of the largest Pst epidemic regions in the world. Although Pst might have high sexual reproduction potential ability in the Himalayan (Nepal and Pakistan) and neighbouring regions in China, Pst sexual reproduction and migration routes between the inland and Tibet Pst populations in China are still unknown. To clarify this, we obtained 961 Pst isolates from Gansu (277), Shaanxi (253), Sichuan (172) and Tibet (259), composing of 13 natural populations, and screened these isolates for a number of SSR markers. The isolates can be divided into two distinct clusters, corresponding to the Tibet and the inland region. Populations in the inland (Gansu, Shaanxi and Sichuan) had extensive gene exchange; little gene exchange was found between the Tibet and the inland populations. Therefore, we argue that the Pst epidemic in Tibet can be practically considered as an independent from the main epidemic system in the inland China. A manuscript describing the result is currently being evaluated for publication.

During the visits, we developed a plan to sample rust isolates at many sites, which were selected based on the current consensus on the Pst dispersal and geographical characteristics. To increase the statistic power in detecting relationships among Pst populations at different sites, a sequence-based approach will be used to genotype isolates from different sites; this approach is expected to generate many polymorphic markers for statistical analysis. All sampling activities are expected to be completed by the late May 2016 and the first batch of sequence data available in late 2016 for preliminary analysis.