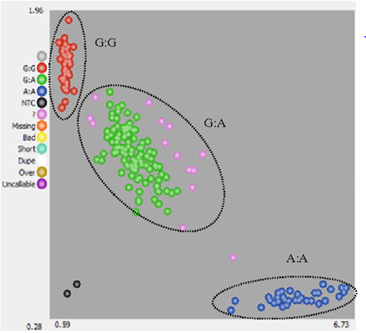 Wheat is a staple crop for many in the world, making up 20% of its calorific intake and playing a large role in many economies. Diseases that threaten its yield can therefore have a large and lasting impact. Puccinia striiformis f. sp. tritici (Pst or yellow rust) is a pathogenic fungus which is prevalent in Africa with new isolates emerging. These new isolates show evidence of being able to overcome the resistant strains of wheat currently being used to prevent outbreaks.

Virus induced gene silencing (VIGS) is a process in which a temporarily silenced gene phenotype is created though the insertion of an RNA fragment from a gene of interest into the gamma genome of the barley stripe mosaic virus (BMSV). Wheat is then infected with this virus through a Nicotiana benthamiana intermediate. Wheat’s natural immune response leads to the creation of siRNAs to target the viral genome for degradation. These siRNAs will be complementary to the vector insert and so also complementary to the endogenous mRNA for that gene. This will then also be targeted and degraded knocking down expression levels.

Uncharacterised genes Chloroplast localising (CL) gene 1 and 2 and phosphoribulokinase (PLK) have been found to potentially be involved in the wheat response to yellow rust infection, although their role was unknown. My project was to use VIGS to supress their expression in wheat seedlings before infecting them with both Pst and Magnaporthe oryzae Pathotype tritici (MoT). PCR using Phusion™ polymerase was used to amplify the fragment needed from its gene. This step required large amounts of troubleshooting ranging from altering reaction and amplification conditions to redesigning the primers involved.

I was successful in amplifying PLK fragment 2 and CL1 fragment 2. Both fragments and the BMSV vector were digested using T4 polymerase to create complementary overhangs before being ligated together and transformed into competent Escherichia coli. Colonies were produced although colony PCR and sequencing showed no fragment had successfully been inserted into the vector.

In addition to starting the VIGS study, I genotyped wild-type and mutant C1045 cadenza wheat plants from the Targeted Induced Local Lesions In Genomes (TILLING) population using a KASPar™. This assay confirmed that two mutant plants were homozygous for the C1045 mutation. The other mutants clustered alongside the wild-types showing either homozygous or heterozygous genotypes (Figure 2). These genotypes will now be confirmed through sequencing.

The wild-type samples and the remaining mutants however did not localise as expected in the assay. The addition of five extra PCR cycles shifted the samples from being a diffused homozygous cluster to a much tighter one that suggests heterozygous identity. The cause of this is unknown especially as all mutant seeds should have come from the same homozygous plant. It could be due to the primers used being chromosome semi-specific so a wild-type primer could potentially bind non-specifically causing a false positive mutant.

I have learnt so much during these six weeks gaining new skills and knowledge as I was introduced to new techniques, protocols, and equipment. I also gained insight into what I should expect if I continue in academia. I want to say thank you to everyone at the Saunders Lab at the John Innes Centre for making me feel incredibly welcomed and especially to Fran for being an amazing supervisor and helping me along the way.

Figure 1 above: A KASP assay displaying ideal results. KASP assays work by adding primers with different coloured fluorescent tags to a DNA sample. One primer binds to the DNA sample if the mutation is present, and the resultant fluorescence is shown on the Y axis. The other primer binds if the mutation is not present and fluoresces along the X axis. Homozygotes will therefore fall into one of two clusters in the top right or bottom left corners whereas heterozygotes form a cluster in the middle of the graph. 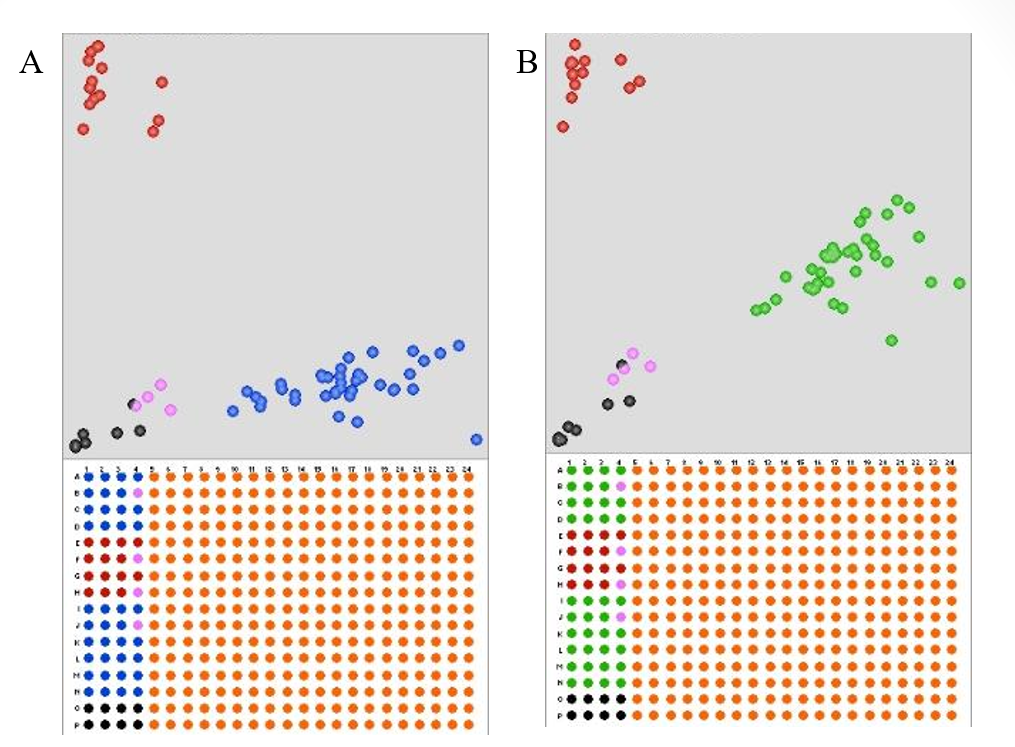 Figure 2: KASP assay results. Black samples are negative controls, pink samples did not amplify correctly potentially due to a low DNA concentration and red samples show the homozygous mutants. Panel A shows the assay after 35 PCR cycles. The blue cluster containing mutant and wild-type samples has localised to a plausible location for homozygous wild-type genotypes. After 40 cycles (panel B), this cluster has shifted location to show a more heterozygous genotype.