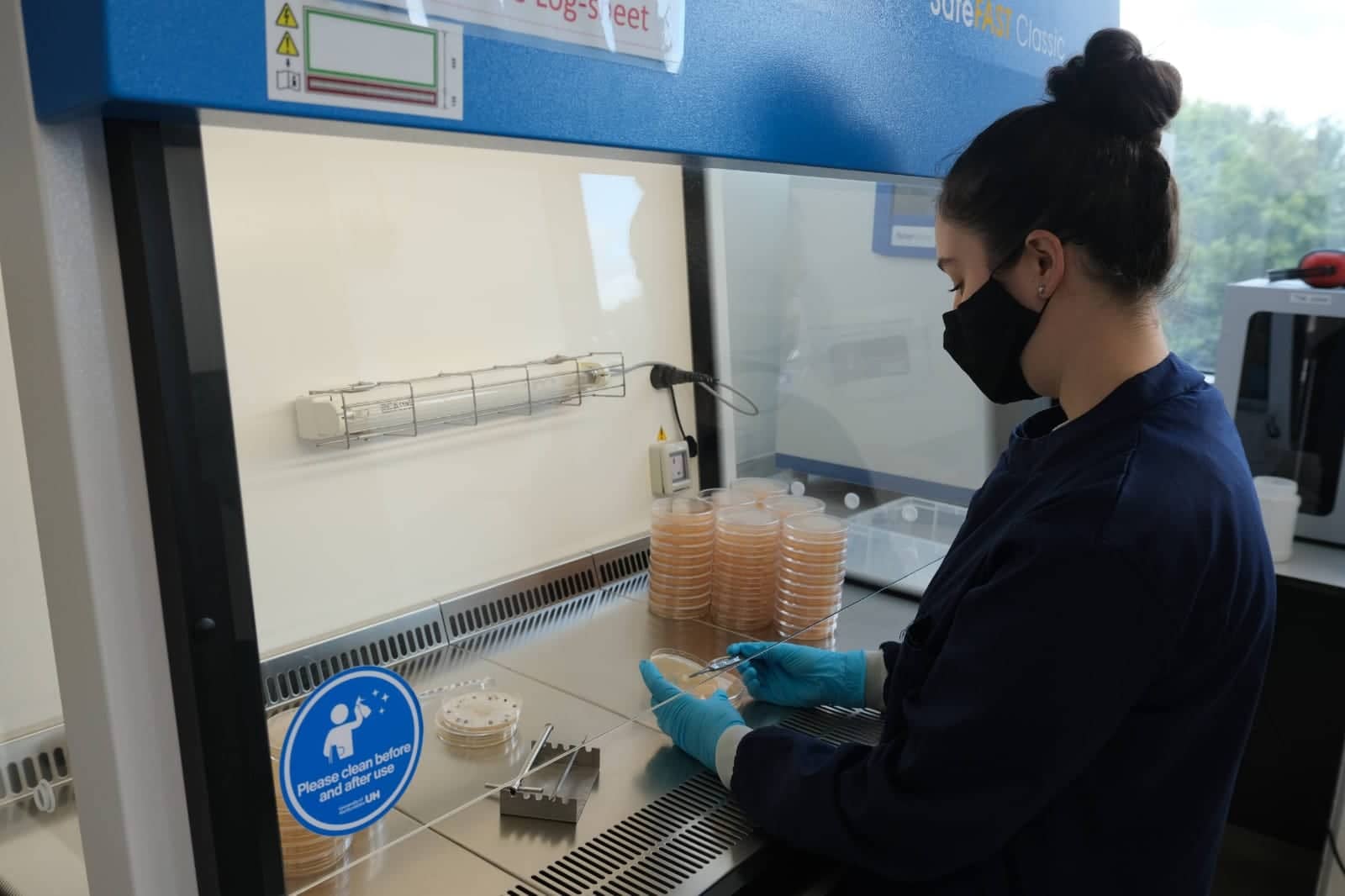 Interactions between Leptosphaeria maculans and L. biglobosa and the effect of their secondary metabolites on the fungal pathogens of oilseed rape (Brassica napus), Sclerotinia sclerotiorum and Verticillium longisporum

The fungal pathogens Leptosphaeria maculans (Lm) and L. biglobosa (Lb) cause phoma stem canker on oilseed rape resulting yield losses of more than £80M each year. Lm produces a phytotoxin called Sirodesmin PL, but its role on phoma stem canker development has not been clearly understood yet. It is possible that Sirodesmin PL helps Lm outcompete other fungal pathogens. However, Lb does not produce Sirodesmin PL and in vitro experiments have found that when Lm and Lb were simultaneously inoculated there was an inhibition in Sirodesmin PL production. This effect was not observed when Lm and Lb were sequentially inoculated. Therefore, this 10-week summer bursary project aimed to investigate the effect of the identified changes in phytotoxin production due to interactions between Lm and Lb, on the colony growth of two other important pathogens of oilseed rape; Sclerotinia sclerotiorum, which causes stem rot and Verticillium longisporum, which causes verticillium wilt.

Clarified V8 (20%) agar medium was used to grow the fungal pathogens for inoculation and for the experiments carried out. An 8mm core borer was used to cut the fungal plugs from plates of S. sclerotiorum and V. longisporum. The fungal plugs were put in the centre of the V8 agar plates, and the plugs were then treated with four secondary metabolites and a control. The control used was ethyl acetate (EtOAc) as this is what the secondary metabolites were suspended in. The four secondary metabolites used were Lm secondary metabolites (Lm only), Lb secondary metabolites (Lb only), Lm sequentially inoculated with Lb after 7 days (Lm + Lb) and Lm and Lb simultaneously inoculated (Lm & Lb). The growth of S. sclerotiorum was measured on days 1-4 (some were only measured to day 3 as colonies had reached the edge of the plate by day 4). The growth of V. longisporum was measured on day 4, day 7 and day 10. The S. sclerotiorum was grown from plates that had not developed sclerotia or from plates that had black sclerotia formed. All the experiments were repeated three times. The growth of fungal colonies was recorded by taking standardised photographs of each plate and measured using the imageJ software. The number of pixels of the colony area was calculated. Using an object of known area, the number of pixels per cm² was calculated and by using this, the fungal colony growth from each day was converted to cm². These results were analysed using the Genstat statistical software. Analysis of variance (ANOVA) was carried out followed by a post-hoc Fisher’s least significant difference tests to determine if there is a significant difference in the colony area between different treatments.

This BSPP summer bursary project has allowed me to learn and develop my skills and I am very grateful to BSPP for funding this project and providing this opportunity, which I would recommend to others interested in plant pathology. I would also like to thank my project supervisor Dr Chinthani Karandeni Dewage and a special thank you to the amazing PhD student James Fortune who directed the project and oversaw all the work.

The University of Hertfordshire

Picture above: Samantha working in the lab