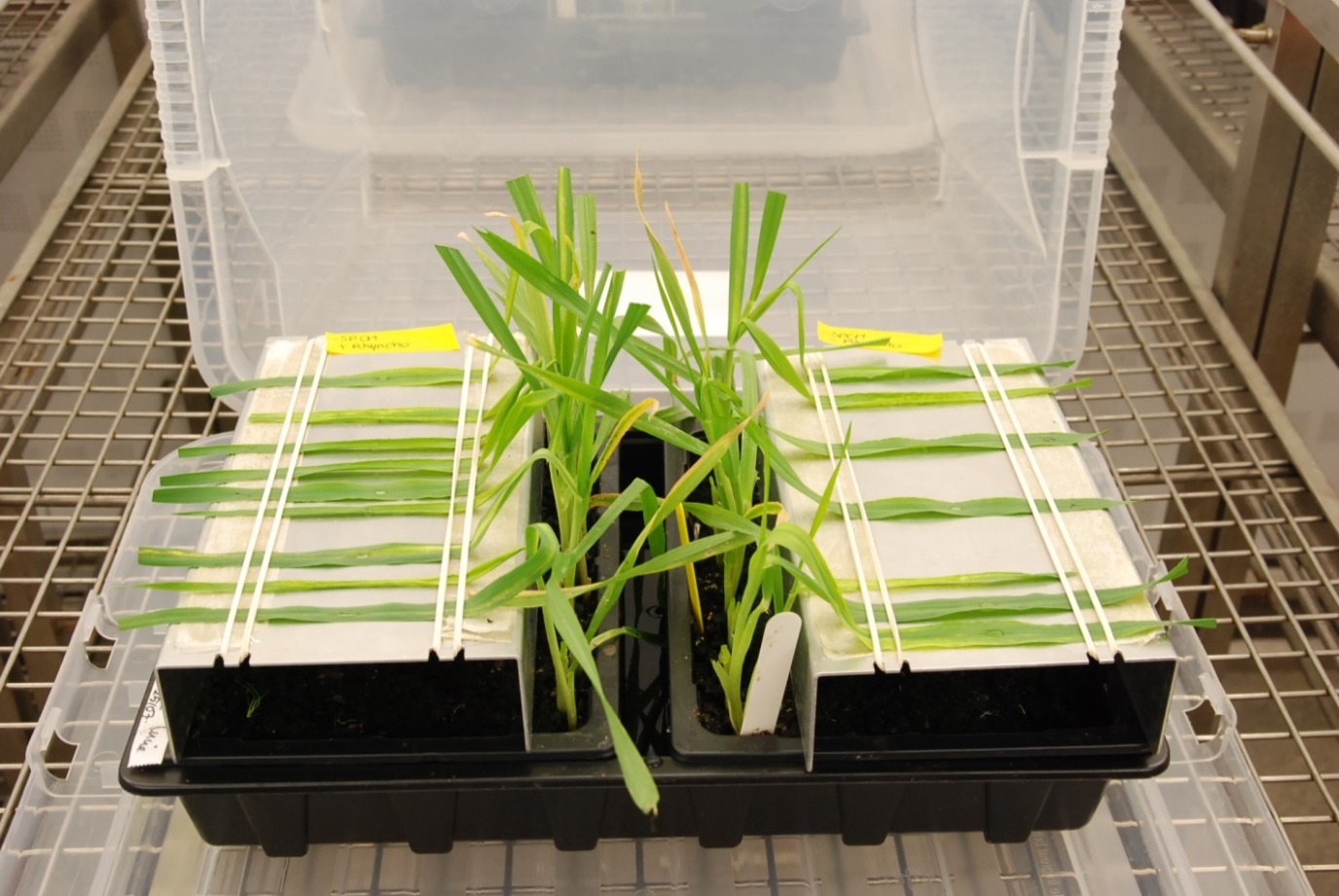 Written by Lucie Griffe at the James Hutton Institute. This is the report from a BSPP Junior Fellowship. Click here to read more/apply for one yourself.

Rhynchosporium commune is a hemibiotrophic haploid fungus that causes scald, one of the most economically important and destructive diseases of barley (Hordeum spp). It can cause yield losses of up to 45% and a decrease in grain quality by infecting leaves, leaf sheaths and ears. Most field infections are caused by debris from previous crops or infected seeds, and dispersion is favoured by rainfall, which allows conidia to spread from infected leaves in drops of water. In humid conditions, conidia germinate on the leaf surface producing hyphae that penetrate the leaf and continue to grow between epidermal cells.

Agronomic practices like crop rotation and grazing may be effective in controlling the occurrence of the disease. The use of chemical control like foliar fungicides can provide a high level of disease control but often leads to evolution of gungicide resistance. The most sustainable method of protecting barley from R. commune is the identification of host resistance genes for the subsequent development of resistant cultivars. Recent advance in high-throughput sequencing technologies and developments in fungal genomics allow the development of a new strategy to identify resistance genes in plants by the study of effector proteins secreted by the pathogen. Effector-assisted germplasm screening offers advantages to crop breeders: the high throughput use of effectors to screening plants can accelerate the identification and transfer of resistance genes to elite cultivars. Indeed, effectors identification improves the understanding of fungal pathogenesis through the study of their genomic sequence, their function and their interaction with target proteins in the plant.

The objective of my PhD is the identification of novel sources of durable resistance to R. commune in barley through the identification and characterisation of candidate fungal effectors. The BSPP fellowship allowed me to spend two months at Rothamsted Research, to learn and have a first-hand experience with Barley stripe mosaic virus (BSMV)-based tools to investigate the function of candidate effectors.

Transient expression using plant virus vectors known as virus-mediated overexpression (VOX) is useful for the production of a recombinant protein. Screening of different barley genotypes for novel sources of resistance using VOX of pathogen effector has great potential in crop breeding. For instance, this technique confirmed the recognition of Nip1 (Necrosis inducing protein), one of the first effector identified in R. commune, by the cognate resistance gene Rrs1, present in the barley cultivar Atlas 46.

BSMV-VOX system is capable of expressing only relatively small (up to ~ 160 amino acid residues) heterologous proteins produced as fusions to the C-terminus of the small viral b protein. The virus was propagated using agroinfiltration in Nicotiana benthamiana and mechanically inoculated on different barley genotypes.

Several barley genotypes were screened for cell death, as evidence of the recognition of the effector protein by the product of a potential plant disease resistance gene present in this genotype. However, the BSMV expression system is technically challenging. Firstly, BSMV-VOX may not be enough to trigger recognition, the plant may need extra plant defence activation to establish the recognition and the level of effector expression provided through BSMV-VOX may not in some cases be sufficient to trigger cell death following the recognition event. Another complicating factor is that BSMV itself induces leaf chlorosis and even necrosis of various degree of severity on some barley genotype, making the phenotyping complicated. Necrosis usually appears at >10-14 days post inoculation (dpi) with VOX constructs. Therefore, the phenotyping is best to be done during a short window post inoculation i.e. between 5-14 dpi. Another complicating factor in BSMV-VOX is relatively poor insert stability, especially for the larger inserts. I checked the stability of BSMV-VOX constructs throughout the barley infection process to be sure that symptoms observed were caused by heterologous protein expression rather than induced by the virus itself. PCR-based analyses showed that in certain cases, BSMV was able to lose or truncate some of the heterologous inserts. Larger inserts were truncated or deleted earlier than smaller inserts. Also, a positive correlation was observed between the appearance of necrosis and the speed of insert loss/truncation, the less stable constructs were able to induce more rapid development of disease symptoms than the stable ones. Verification of insert stability and a side by side comparison with the wild type BSMV infection must be done for each experiment to make sure that the phenotype observed is specifically induced by the candidate fungal effector under study. Without the appropriate controls and PCR verification, the observed symptoms may have been misinterpreted.

BSMV is also commonly used as a gene silencing tool. Virus-Induced Gene Silencing (VIGS) is used to knock-down expression of plant genes, whereas Host-Induced Gene Silencing (HIGS) is used to reduce expression of genes in the plant pathogen. One of the pre-requisites required when using these functional genomic tools is the demonstrated compatibility between BSMV and the second pathogen under investigation. A sequential inoculation of barley with BSMV and a mixture of R. commune strains (illustrated on the picture) followed by microscopic observation of trypan blue-stained leaves at different time points post fungal inoculation showed that R. commune was able to colonise BSMV-infected leaves. On my return to JHI, BSMV-HIGS constructs targeting GFP and R. commune genes will be tested during barley infection with the transgenic GFP-expressing strain of R. commune to see if BSMV-HIGS can be achieved in this fungal pathogen. In the absence of an efficient gene knock-out technology for R. commune in our lab, BSMV-HIGS seems to be an interesting alternative tool for silencing R. commune effectors during infection and could help us to figure out if these specific effectors are essential for pathogenicity. Moreover, HIGS might prove to be an alternative way of preventing the disease spread in the field.

Although, BSMV proved to be challenging to work with, I have gained new knowledge and experience with this new technique. Having experience of its uses and limitations, I can now apply it further in my PhD research. I would like to thank Kim Hammond-Kosack, her group, and especially Olaya Ruiz, Wing-Sham Lee and Kostya Kanyuka and his team for hosting and helping me. I am also grateful to the BSPP which gave me the opportunity to visit another lab and learn new techniques though the Junior Fellowship.