Gero Steinberg, a fungal cell biology expert at Exeter University and BSPP member, has discovered a novel fungicidal chemical with multiple modes of action. The team based at Exeter University used ground-breaking live cell imaging to define the action of a ‘Lipophilic Cation’ new to science. They also added new knowledge on the Mode of Action (MOA) of a known fungicide (Dodine).

Pathogenic fungi pose a huge and growing threat to global food security. Currently, we protect our crops against fungal disease by spraying them with fungicides. However, the growing threat of microbial resistance against these chemistries requires continuous development of new fungicides. 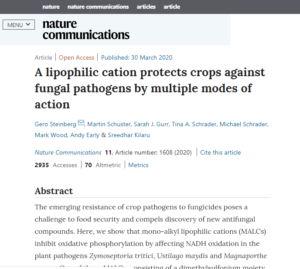 A study recently published in Nature Communications, led by Prof. Gero Steinberg and co-authored by former BSPP President Prof. Sarah Gurr, both from the University of Exeter, addresses the challenge of developing new fungicides. They realised that the respiration chain in fungal mitochondria, required to produce ATP to “fuel” all cellular processes, have unique and fungal-specific features (such as additional NADH dehydrogenases). In fact, important fungicide classes, such as the succinate dehydrogenase inhibitors (SDHIs) and the strobilurins target the fungal mitochondrial respiration chain in mitochondria.

But how could we target mitochondria with new inhibitory molecules? The answer was provided by searching the chemistry literature.

A group of molecules, namely lipophilic cations, are used to target therapeutics into mitochondria, where they occasionally insert into the inner mitochondrial membrane. While in humans, this is an unwanted side effect, it encouraged the Exeter researchers to search for lipophilic cations amongst existing fungicides. Indeed, the well-established fungicide dodine is a mono-alkyl lipophilic cation (MALC), but this molecule is reported to have an unknown mode of action (U12, FRAC code list© 2020).

In a first step, Steinberg et al. used a cell biological approach to understand the mode of action of dodine in the fungus Zymoseptoria tritici (the cause of Septoria tritici blotch, STB). This fungus is a noteable and destructive pathogen on temperate-grown wheat. Recently, the Steinberg laboratory (e.g. Kilaru et al. 2017, 105:16-27) developed a molecular “toolbox” for live cell imaging of this devastating pathogen.

In their study, published in Nat. Commun., they firstly show that dodine inhibits the respiration chain at an early step (NADH oxidation), which results in depletion of cellular ATP in the pathogen. Using this knowledge, the authors next tested the fungi-toxic effect of a large number of newly-synthesised MALCs.

This led to the discovery of C18-SMe2+, a MALC, which carries a sulfonium head group and a longer alkyl chain. Further studies revealed that C18-SMe2+ shows higher fungi-toxicity than dodine and protected wheat and rice more effectively against STB and rice blast disease. Most importantly, this new chemistry showed no phytotoxicity, no genotoxicity and very low toxicity in human cells and water fleas (~8-times less toxic against Daphnia magna).

Why is C18-SMe2+ performing so much better than dodine? The authors show that this is most likely due to a novel and additional effect of the MALC on the mitochondrial respiration chain; their data demonstrate that C18-SMe2+ induces the release of electrons at respiration complex I, which induces the formation of reactive oxygen species (ROS). This, in turn, activates a programmed cell death pathway, which drives the pathogen into “suicide”.

These effects on mitochondrial respiration were also found in the rice blast fungus Magnaporthe oryzae and the maize pathogen Ustilago maydis. Finally, when applied to crop plants, C18-SMe2+ “alerts” the plant defence system, which prepares the crop for subsequent attack, thereby increasing the armoury of the plant against the intruder.

Taken together, this study shows that MALCs are a new class of mitochondrial inhibitors. In particular C18-SMe2+ holds the potential to help in our fight against pathogens that challenge our food security.