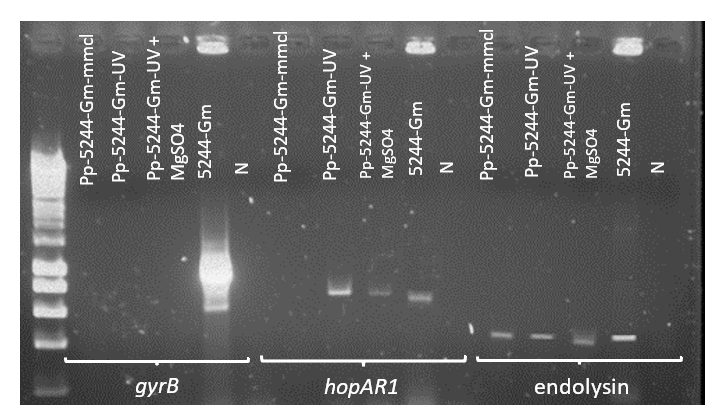 Can a prophage within the bacteria Pseudomonas syringae transfer genes between bacteria?

The goal of my project was to observe the role of prophages in the transfer of effector genes in the Pseudomonas syringae pathovars. Within Professor Rob Jacksons lab, led by Dr Mojgan Rabiey at the University of Birmingham, I examined if a prophage present in the pathogenic P. syringae pv. morsprunorum race 1 strain 5244 can move effector genes into epiphytic Pseudomonas.

Prophages are sections of viral DNA that have become incorporated into the bacterial genome. Environmental stresses such as sunlight can cause the prophage to be excised into the surrounding environment. However, sometimes the virus can be induced and takes with it some bacterial genes and leaves some of its own DNA behind. This means prophages can contain effector genes or antibiotic resistance genes that increase the fitness or virulence of bacteria. Epiphytes are microbial populations that live on the surface of leaves including pathogens and non-pathogens. If a non-pathogenic epiphyte were to receive genes from prophage movement, it could tip the balance to allow them to begin growing endophytically and cause disease.

My studentship involved collecting cherry leaf and stem samples from orchards and woodlands. We also received characterised samples of Pseudomonas to assess prophage movement between the pathogenic strain 5244 and the epiphytic non-pathogenic strain 3.7F. We tagged the 5244 in the prophage region with a gentamycin cassette allowing us to monitor the movement. Similarly, the 3.7F was rifampicin-resistant for selection of 3.7F and not 5244.

To induce the prophage, we applied various stresses such as the chemicals mitomycin C, chloroform and magnesium sulfate, as well as ultraviolet light. Figure 1 shows that the prophage region within 5244 is able to be induced to excise from the chromosome and circularises even after the addition of the gentamycin resistance cassette. Our next steps were to try in vitro electroporation (to test for transformation) or conjugation methods to see if the prophage moves into the epiphytes. We also tested each combination in planta via phyllosphere inoculations to see if the prophage moves in a natural environment.

An obstacle I overcame was understanding why we were carrying out each step of the protocol, and deciding what to try next. There was a lot of complex decision making that relied on understanding everything that had been done so far. Because of the levels of selection we had used, it was difficult to figure out what colonies on plates meant, so having an understanding of everything we had done was key.

We were able to show that prophages within the Pseudomonas species might be able to move from pathogens to epiphytes. This opens new doors of research into this area. If this can occur between just these two strains, what are the possibilities in other phylogroups with other prophages. I applied for the BSPP summer studentship because I had lost a year of lab experience during lockdowns. This gave me the opportunity to expand my lab skills and put years of learning into practice. I now have a greater direction and might actively look for a career in research now that I understand what a research career looks like.