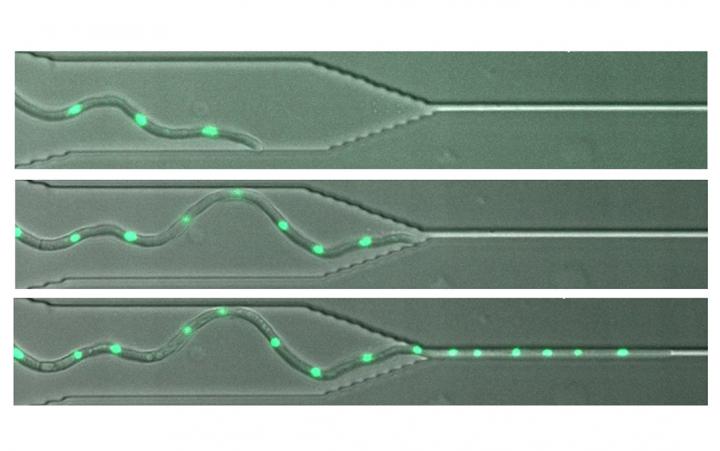 Can I squeeze through here? How some fungi can grow through tiny gaps

Tsukuba, Japan – Fungi are a vital part of nature’s recycling system of decay and decomposition. Filamentous fungi spread over and penetrate surfaces by extending fine threads known as hyphae.

Fungi that cause disease within living organisms can penetrate the spaces between tightly connected plant or animal cells, but how their hyphae do this, and why the hyphae of other fungal species do not, has been unclear.

Now, a team led by Professor Norio Takeshita at University of Tsukuba, with collaborators at Nagoya University and in Mexico, has discovered a key feature that helps explain the differences among species. They compared seven fungi from different taxonomic groups, including some that cause disease in plants.

The team tested how the fungi responded when presented with an obstruction that meant they had to pass through very narrow channels. At only 1 micron wide, the channels were narrower than the diameter of fungal hyphae, typically 2-5 microns in different species.

Some species grew readily through the narrow channels, maintaining similar growth rates before meeting the channel, while extending through it, and after emerging. In contrast, other species were seriously impeded. The hyphae either stopped growing or grew very slowly through the channel. After emerging, the hyphae sometimes developed a swollen tip and became depolarized so that they did not maintain their previous direction of growth.

The tendency to show disrupted growth did not depend on the diameter of the hyphae, or how closely related the fungi were. However, species with faster growth rates and higher pressure within the cell were more prone to disruption.

By observing fluorescent dyes in the living fungi, the team found that processes inside the cell became defective in the fungi with disrupted growth. Small packages (vesicles) that supply lipids and proteins (needed for assembling new membranes and cell walls as hypha extend) were no longer properly organized during growth through the channel.

“For the first time, we have shown that there appears to be a trade-off between cell plasticity and growth rate,” says Professor Takeshita. “When a fast-growing hypha passes through a narrow channel, a massive number of vesicles congregate at the point of constriction, rather than passing along to the growing tip. This results in depolarized growth: the tip swells when it exits the channel, and no longer extends. In contrast, a slower growth rate allows hyphae to maintain correct positioning of the cell polarity machinery, permitting growth to continue through the confined space.”

As well as helping explain why certain fungi can penetrate surfaces or living tissues, this discovery will also be important for future research into fungal biotechnology and ecology.

The article, “Trade-off between plasticity and velocity in mycelial growth“, was recently published in mBio at doi.org/10.1128/mBio.03196-20

A team led by the University of Tsukuba has found key differences that explain why some species of fungi can grow successfully through tiny gaps, whereas other fungi–typically those with faster growth rates–cannot squeeze through and stop growing. The trade-off between developmental plasticity and growth rate helps to understand how fungi penetrate surfaces or plant/animal tissues, with important implications for fungal biotechnology, ecology, and studies of disease.