Recent surveys have shown that up to a third of crops are lost on their way to the table due to fungal and oomycete pathogens. One such pathogen is Fusarium graminearum – the causal agent of Fusarium Head Blight (FHB) which is recognised as one of the biggest threats to wheat production. FHB not only affects wheat productivity on a global scale by reducing both the yield and quality of grain but can also result in the production of mycotoxins in the grain which are harmful to both humans and livestock.

The F. graminearum-wheat infection process is unique when compared to other model fungi and is characterised by coincident symptomless and symptomatic phases of infection. A recent Affymetrix microarray study exploring the transcriptome of F. graminearum during wheat infection revealed the differences in gene expression accompanying these different phases. During both phases of infection an up-regulation is seen of genes that encode F. graminearum small secreted proteins (FgSSPs), or putative effectors, produced by the fungus to aid the infection of the host plant.

The first aim of this summer project was to generate transcriptome data by qRT-PCR to validate previously generated Affymetrix data representative of the several phases of F. graminearum infection. RNA was extracted from Fusarium-infected rachis internodes sequentially harvested from the initial point of infection and representative of the different stages of Fusarium infection. qRT-PCR was then carried out to determine the expression profiles of various FgSSPs, as well as the reference gene actin. The results show that Fusarium expresses genes coding for different putative effectors depending on the infection phase. For example, some SSP genes were found to be upregulated during the symptomless phase but not during the symptoms stage. For the most part, the expression profiles of genes tested using qRT-PCR matched up to the Affymetrix expression profiles. 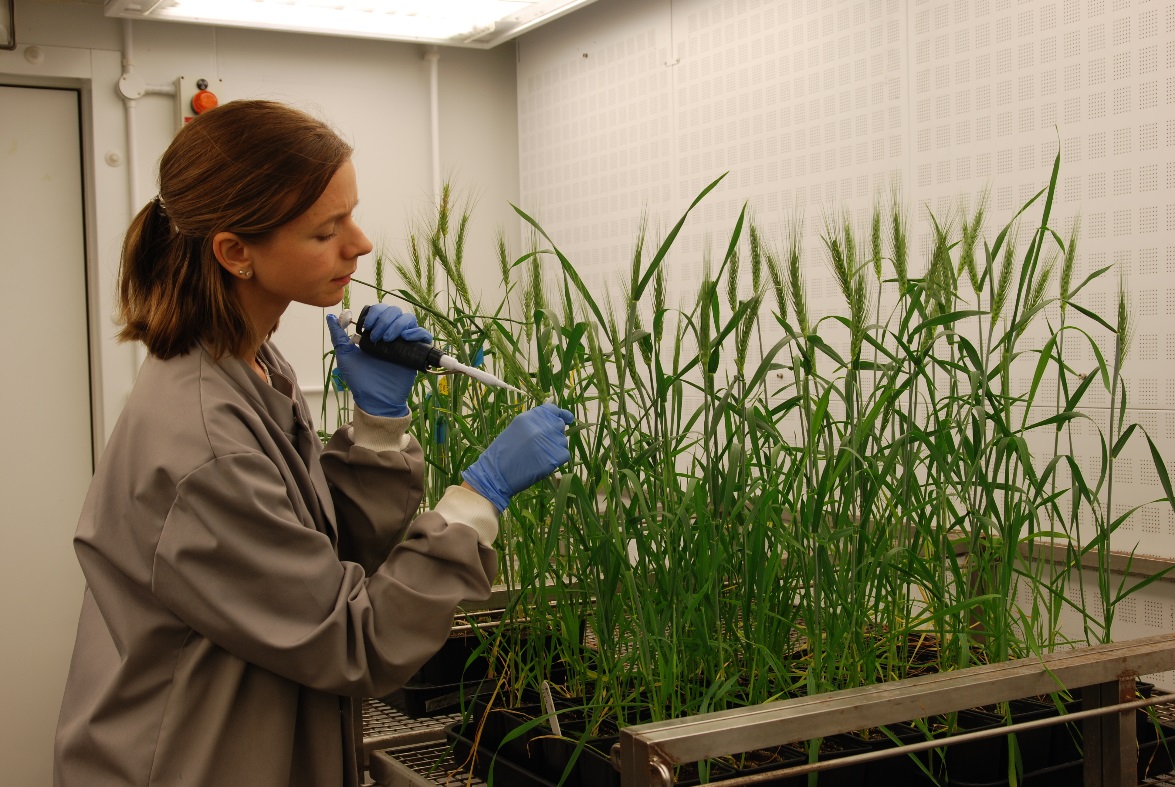 The second part of this project utilised the Barley Stripe Mosaic Virus system (SMV-VOX) to see whether overexpression of FgSSPs in the non-host Nicotiana benthamiana induces changes in defence gene expression. To do this I needed to clone the FgSSP genes into the BSMV-VOX vector so that each could then be transformed into Agrobacterium. I then infiltrated Nicotiana with the bacteria and after five days harvested the tissue and extracted the RNA from three independent experiments. Using these samples, the relative expression fold change of the defence genes after agroinfiltration with each of the Fusarium proteins was determined using qRT-PCR.

This experiment was particularly challenging because it involved working with bacteria, viruses and fungi within the same plant. This meant that normalising the data to make a comparison was difficult as I had to consider the defence response due of Nicotiana to agrobacteria infiltration and BSMV as well as the overexpression of the fungal proteins which I was interested in.

This BSPP sponsored summer bursary project has given me both the knowledge and the confidence to continue my studies after graduating in the pursuit of a PhD within plant pathology. The skills that I have learnt at Rothamsted Research will be invaluable to me in the future including statistical analysis, experimental design and problem solving. I have had the fantastic opportunity to further my understanding of laboratory tools and techniques and to increase my practical lab experience. For all of this I would like to thank Rothamsted Research and specifically Catherine Walker for her day-to-day supervision as well as Dr Martin Urban and Prof. Kim Hammond-Kosack.