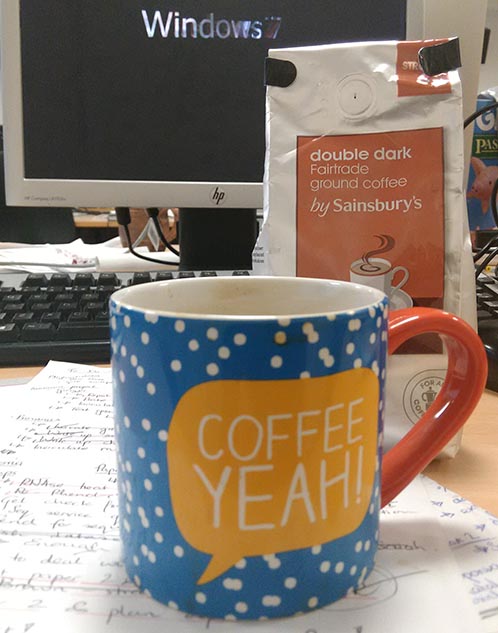 Everyone in science knows the importance of coffee.  If you don’t drink it yourself, you surely know many who do.  As I write this, my boss’ PA walks in to return the coffee I left in the boss’ office.  You see?  They know it’s important.

I love coffee – the aroma, the bitterness.  And coffee is the second most valuable exported commodity worldwide, so I guess one or two people agree.  There’s also the caffeine, which I hear those who don’t love coffee for itself sometimes appreciate.  In fact, 120,000 tonnes of caffeine is consumed globally each year, although a substantial proportion of that is synthetically produced and consumed in beverages which aren’t coffee1.

Nevertheless, coffee prices are rising—demand is increasing and production falling2.  Fortunately, we know quite a lot about the causes. Plant pathologists, heed this: a lot of what is wrong is disease.  Coffee—both Coffaea arabica and C. robusta—is attacked by a range of organisms, including a virus (blister spot), a bacterium (Elgon dieback), several fungi (including coffee leaf rust, berry disease, wilt, leaf spot and berry blight), as well as the root-knot nematode, coffee borer, black twig borer, and two moths of the genus Leucoptera, the wonderfully named L. coffeella and L. caffeine.

So, sadly, the situation isn’t great for the coffee bean.  Among the list of pathogens are fungi which have serious implications for worldwide coffee yield.  The ascomycete Cercospora coffeicola causes leaf spot and berry blotch diseases, and is widespread in Central America3.  Meanwhile, Colletotrichium kahawae, an ascomycete causing coffee berry disease (CBD), is widespread in Africa and affects all C. arabica grown there.  Losses due to CBD can reach 80%, or 50% under intensive fungicide regimes whose costs can reach 45% of the total for coffee production.  This has led to the abandonment of coffee crops4.  Also in Africa, there are serious problems with coffee wilt, caused by the ascomycete Fusarium xylarioides, which particularly attacks lowland robusta crops in Uganda, Cameroon and the Congo.  It has destroyed over 12 million plants5.  Perhaps the most worrying fungus is Hemileia vastatrix—coffee leaf rust (CLR).  H. vastatrix, so named for its devastating effect on coffee6, is a montane basidiomycete which shares its centre of origin with coffee, and has therefore probably evolved alongside the crop.  First described in Kenya and Sri Lanka in the 1860s, it is now found throughout Africa, the tropics of Asia, as well as Central and Southern America.  Associated losses are 15-80%, and have a history of causing the abandonment of coffee production: in the 1860s, Sri Lanka saw an 80% reduction in land used for coffee as yields fell.  Copper-based fungicides help with CLR, but the regimes needed are again intensive and expensive7.

So what is the outlook for coffee?  Demand for coffee is rising, with increased consumption in China and the USA, and the world is in coffee-deficit in 20168.  The factors involved include La Nina-related weather fluctuations unfavourable for coffee production, including droughts in Brazil.  On the other side of the weather equation, heavier than normal rain has increased the risk from CLR in some areas9.

H. vastatrix can infect across a wide temperature range (10-35 oC) as long as there is moisture.  One of the world’s largest producers of coffee, Colombia, suffered a serious drop—40%—in production from 2008-2011, attributed to CLR.  However, a new study by Dr Dan Bebber at the University of Exeter found no evidence of a long-term trend in CLR risk based on recorded climatic conditions (from 1990-2015).  Instead, it is possible that the CLR epidemic was promoted by a reduction in fertiliser input triggered by price spikes during the 2008 financial crash.  Less vigorous coffee plants may have been more susceptible to CLR10.

This finding hints at the importance of management in reducing disease incidence and maintaining yields.  At the recent ‘Grand Challenges in Plant Pathology’ study group run by Prof Gail Preston and sponsored by the BSPP, delegates and stakeholders discussed, among many topics, the question—proposed by Dr Julie Flood, of CABI—of how to encourage uptake of best practise by those at the sharp end of agricultural decision making.  The Colombian CLR outbreak became one exemplar for this discussion.  As academic plant pathologists, we need to engage with stakeholders if we are to tailor our advice to their needs.  To speculate: what might have happened had coffee-growers known that reduced fertilisation would render plants susceptible to CLR?  Or if researchers had been aware that advice on protecting nitrogen deficient coffee plants from CLR was needed in 2008?

The plight of the coffee bean, under attack by a plenitude of pathogens and pests, as well as by the vicissitudes of weather and the international money markets, provides a timely example of the need for global collaboration to address such challenges.  Global, that is, both geographically and in ‘expertise-space’—we need dialogue, not just between all the relevant experts, but also those we hope will listen to their advice.

Right, anyone for a cuppa?  Coffee, of course.

*I work with Prof Sarah Gurr at the University of Exeter.  Find me on twitter as @quietscientist and as a member of @GurrLabExeter