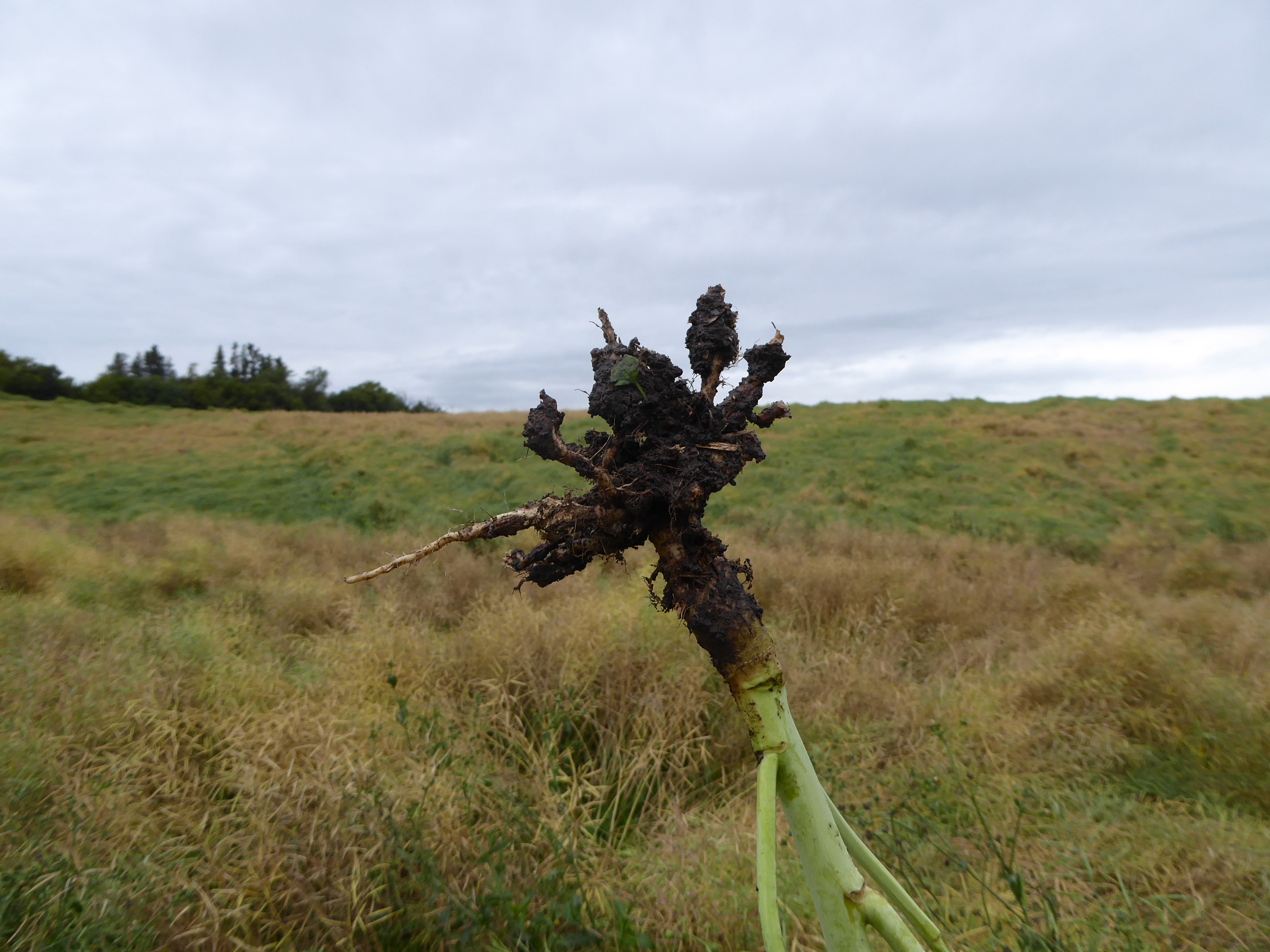 Clubroot disease, caused by Plasmodiophora brassicae, is an important and damaging disease of brassica crops such as oilseed rape (canola), cabbage and mustard. It is spreading rapidly in many parts of the world and is difficult to manage once established in a field. Clubroot attacks plant roots, resulting in reduced growth, reduced seed yield and production of large, misshapen root ‘galls’. These clubbed roots contain millions or billions of resting spores that are released into the soil after harvest. Once present in a field, resting spores can persist for many years. A high level of resting spores in a field not only results in severe disease for subsequent brassica crops but is also associated with rapid breakdown of genetic resistance.

To manage clubroot and slow the breakdown of resistance, producers need a cost-effective way to drive down spore concentration in infested patches and to prevent patches of clubroot from spreading across fields and farms. A number of nonhost crops, such as perennial ryegrass, develop the initial stage of pathogen infection in their root hairs, but no new resting spores are produced. These non-host crops are reported to stimulate the germination of resting spores, which would help to reduce clubroot inoculum over time.

In our study, the effect of several common forage grasses and other field crops on the concentrations of spores in soil was assessed in short-duration (8 week) studies under controlled conditions. Spore concentration declined rapidly in bare soil (control). Cultivars of perennial ryegrass, meadow bromegrass, smooth bromegrass, spring wheat, barley, and even field pea further reduced spore numbers compared to bare soil, but soybean did not. This result was unexpected because cereals and pulses do not develop high levels of root hair infection, and so were not expected to stimulate high levels of spore germination. Also, crops with large root systems, which should produce large amounts of root exudates that stimulate spore germination, were no more effective than field pea.

Although the relative contribution of perennial grasses, spring cereals and field pea to reduction in clubroot spores was quite small in these short-duration studies, it could potentially have a large effect on spore numbers over several years. The advantage of grass crops over annual crops for management of clubroot is that movement of spores in infested soil is minimized over the entire duration of the grass stand. A positive and practical solution for growers to combat the spread of clubroot disease.

Grasses and field crops reduce the concentration of resting spores of Plasmodiophora brassicae in soil under controlled conditions.

If you are interested in #plantviruses, #planthealth or #entomology why not join CONNECTED & be part of our Network of 1500+ members in 87 countries? It is quick and completely free! https://www.connectedvirus.net/about/join/