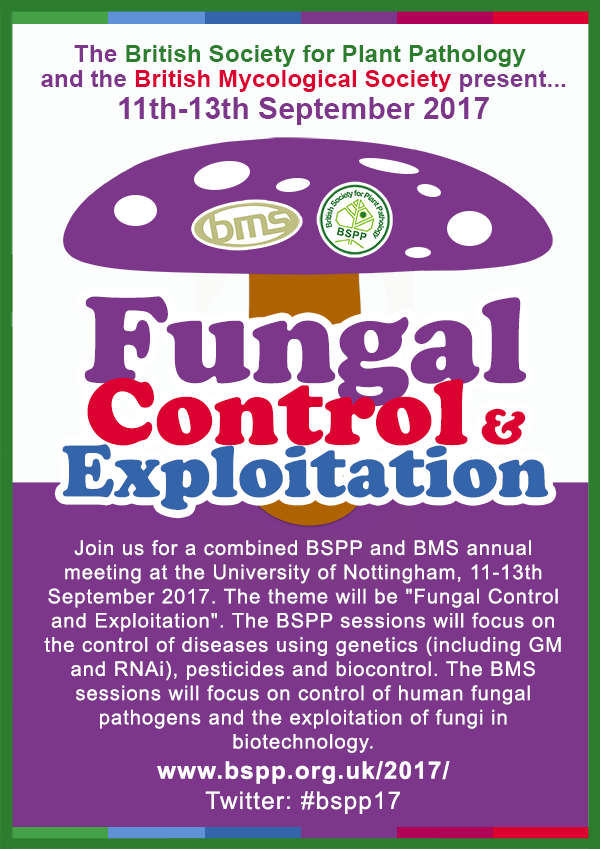 Sponsored by Elsevier and CABI

The meeting will be a joint venture with the British Mycological Society (BMS), so there will be additional interest from the parallel BMS sessions, as well as several joint plenaries. The BSPP sessions will focus on the control of diseases using genetics (including GM and RNAi), pesticides and biocontrol. The BMS sessions will focus on control of human fungal pathogens, as well as exploitation of fungi, for example in biotechnology. We are delighted to have assembled a first-class programme of invited speakers for the meeting, with confirmed BMS and BSPP speakers so far including:

Visit to Chatsworth House – birthplace of the Cavendish Bananas.

Cavendish bananas are “our” bananas – the banana we buy in UK supermarkets or any supermarket around the world. Today, they are the most widely grown bananas. And they became so popular by a plant disease: In the 1950s, an epidemic of Fusarium wilt devastated banana plantations in Middle America. Cavendish was the only resistant banana cultivar that could be grown. It saved the world’s banana trade from collapse. We are planning an outing to nearby Cavendish house in association with the BMS/BSPP Annual meeting. This is a chance for a tailor-made tour of the famous glasshouse facilities originated by Paxton and to view an original clone of the Cavendish banana, first cultivated in 1833.

A FREE science communication workshop is offered on the final afternoon of the 2017 Presidential meeting to support scientists thinking of getting involved in public/schools engagement. It will be a generic sci comm workshop with a focus on plant pathology and will be very hands-on.

Offers of short talks about your favourite pathogen, their significance and the techniques you are using to explore them are invited for the 3rd Damaging & Deadly teacher and VIth form mini-conference, that takes place just before the poster session at the Presidential Meeting.

In support of initiatives to encourage women into STEM, we always have at least 1 female scientists among our 3 speakers. Please email BSPP’s outreach officer to express your interest in giving one of these talks (phil.@nbi.ac.uk).