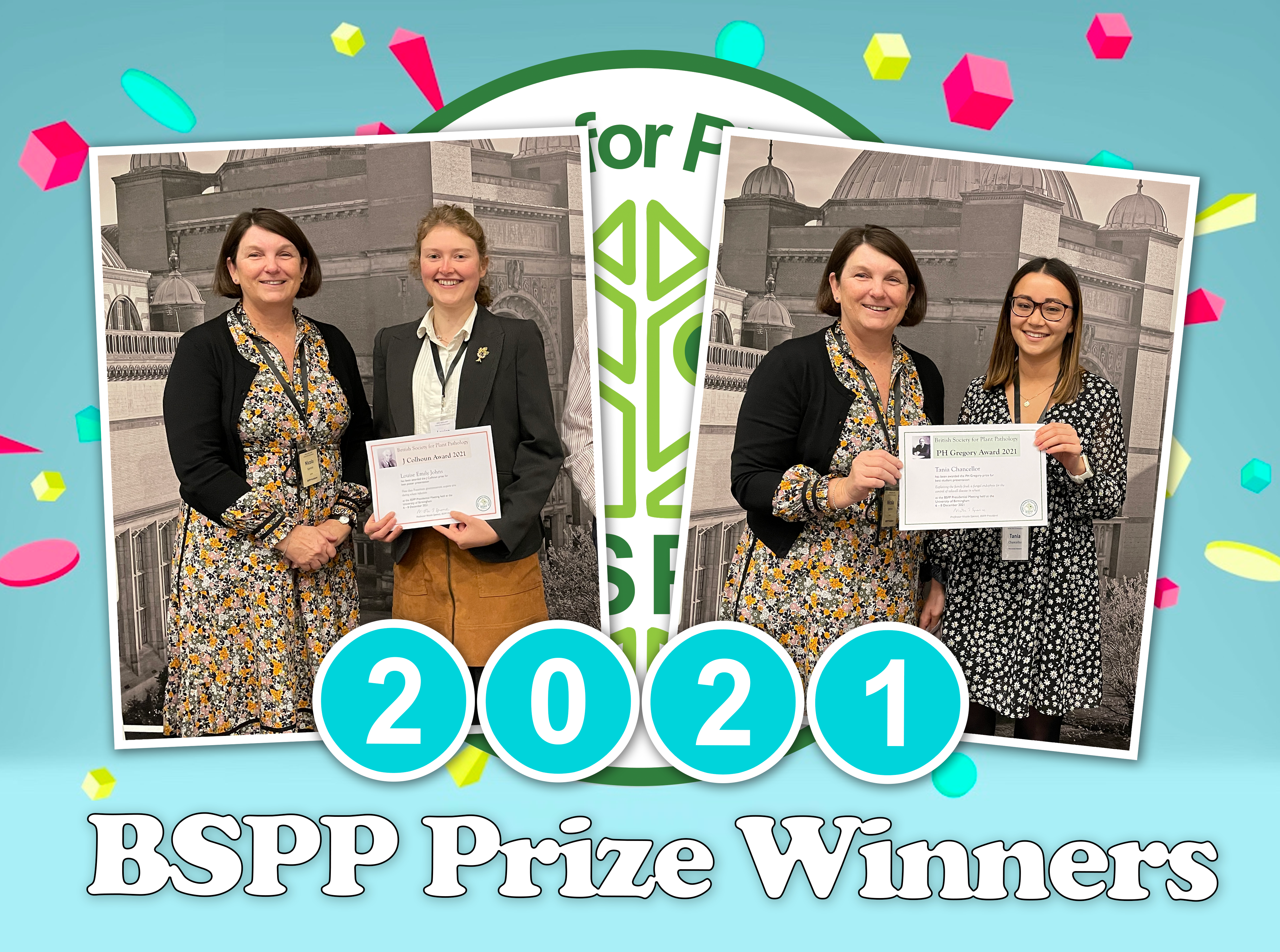 Congratulations to the student prize winners from the 2021 BSPP Presidential conference: Our Plants, Our Future.

The J Colhoun Poster Prize was won by Louise Johns (pictured left). More about the prize (and previous winners) can be found here.

The PH Gregory Prize for best talk was won by Tania Chancellor (pictured right). More about the prize (and previous winners) can be found here.

Also pictured is our 2020 and 2021 President: Professor Nicola Spence.

Both their abstracts can be read below…

How does Fusarium graminearum acquire zinc during wheat infection?

Fusarium Head Blight (FHB) is the number one floral disease of cereals, including wheat, and is principally caused by the ascomycete fungus Fusarium graminearum. Infection contaminates the cereal grain with trichothecene mycotoxins, posing a threat to human health and global food security. Currently, there is no effective method to control FHB. Thus, an enhanced understanding of the molecular determinants of FHB is needed. Nutrient acquisition from the host is crucial for fungal pathogenesis [1]. Zinc is an essential micronutrient, but how F. graminearum acquires zinc from its wheat host during infection is unknown. Phylogenetic and transcriptomic analyses suggest that F. graminearum uses multiple zinc transporters (ZIPs) to acquire zinc during wheat infection. A library of F. graminearum mutants lacking individual ZIPs was generated and shows the importance of the ZIPs during fungal growth under zinc stress and during wheat infection. Complementation of a ZIP-deficient S. cerevisiae strain with select F. graminearum ZIPs provided supporting evidence that these ZIPs function as zinc importers. Transcriptomic analyses revealed that the expression of the ZIPs and a transcription factor were dependent on environmental zinc levels. RNA-sequencing demonstrated the ZIP expression was dependent on a zinc-responsive transcription factor, which was ultimately shown to be essential to growth under zinc stress and during wheat infection. These on-going investigations continue to define the importance of novel metal ion acquisition systems to F. graminearum growth, stress-responses, mycotoxin production and virulence.

Exploiting the family feud: a fungal endophyte for the control of take-all disease in wheat

Take-all disease, caused by the soil-borne ascomycete fungus Gaeumannomyces tritici, is the most economically important root disease of wheat in the UK and worldwide. Yield losses of up to 60% have been reported in the UK but are typically in the range of 5-20%(1). The fungus invades the roots and destroys the vascular tissue, hindering the plants ability to uptake water and nutrients from the soil. Current control methods include crop rotation, later sowing of crops at risk and the use of partially effective fungicide seed dressings. Closely related species in the Magnaporthaceae family, such as G. hyphopodioides, occur naturally in arable and grassland soils and have considerable potential to suppress take-all disease(2). Through detailed microscopy analyses we have identified a strong lignification response in roots colonised by G. hyphopodioides. In addition, we found that G. hyphopodioides produces “sub-epidermal vesicles” in planta. Transmission electron microscopy (TEM) revealed that these structures share key characteristics with fungal chlamydospores, and may be formed in response to upregulated plant defences. Co-inoculation bioassays demonstrated that effective take-all control is achieved when G. hyphopodioides colonises the root system first, further strengthening the hypothesis that G. hyphopodioides induces a plant defence response, thereby preventing future infection by G. tritici. By performing a comparative transcriptome analysis via dual-RNAseq we have elucidated crucial defence pathways implicated in take-all disease resistance in wheat, shedding light on the biocontrol mechanism of G. hyphopodioides.