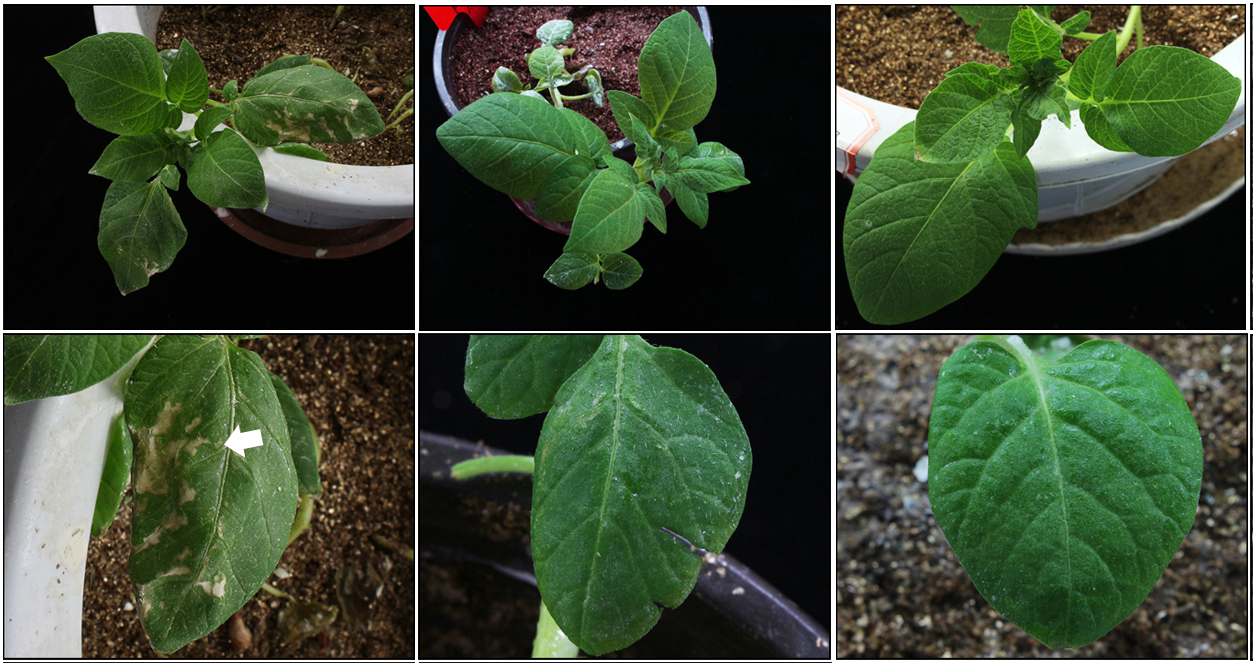 Potato (Solanum tuberosum L.), which we often consume in our daily life, is the fourth most important food crop in the world after rice, wheat and corn. Currently, potato has a total planting area of about 19 million hm2 in the world. Potato now faces severe disease challenges in the process of cultivation, reminding us of the Irish Potato Famine that occurred in Ireland between 1845 and 1849 due to the appearance of the plant disease, Phytophthora infestans. Beside fungi, viral disease is very common for potato. PVY (Potato Virus Y), a member of the Potyvirus, is a linear ssRNA virus with a genome length of about 10 Kb. PVY is listed, arguably, as one of the top ten agriculturally important viruses and results in significant yield losses.

It has been reported that Pseudomonas syringae, a plant bacterial disease, secretes an effector protein (AvrPphB) to trigger a defense response during its invasion of Arabidopsis thaliana, a widely used model plant. The effector protein is a protease (a molecular scissor that cuts on a specific site of target host protein AtPBS1), which is from the plant host Arabidopsis. When the bacterium invades Arabidopsis, it secretes effector protein (AvrPphB) into the host cell, and the protease scissor activity cuts the host protein (AtPBS1) into two parts. This activates another host protein (AtRPS5), triggering plant immunity to the bacterium. Therefore, the host proteins (AtPBS1 and AtRPS5) act as a trap against Pseudomonas syringae bacteria carrying the AvrPphB effector. This trap does not operate against bacteria without the effector, meaning that this pair-wise host recognition (using two plant proteins: AvrPphB-AtPBS1 ) is important for defense responses.

Given that recognition is essential, can we modify existing host immunity to direct toward a new pathogen?

The answer is YES. When this trio of proteins (AvrPphB-PBS1-RPS5 ) is exclusively used for host immunity to invading bacteria, it was modified to counteract virus disease and was termed “decoy engineering”. In a recent article, decoy engineering is elegantly designed to inhibit invasion by Potato Virus Y (PVY).

The authors first identified a potato equivalent (named StPBS1) of the target host protein in Arabidopsis (AtPBS1). Similar to AtPBS1, the potato protein is confirmed to trigger immunity in potato toward invading Pseudomonas syringae via the same AvrPphB, effector. What’s more, Potato Virus Y has a protease (named NIa-Pro) which is originally used by the virus for its own benefit. When the effector cut (or “cleavage”) site of StPBS1 was replaced with the new NIa-Pro cleavage site, the resultant modified protein (StPBS1NIa ) was able to recognize PVY infection and trigger plant immunity to the virus.

In summary, the authors now expand the use of “decoy” engineering to PVY in potato and open a way for pathogen control by engineering host proteins to virus invasion. Also, therefore, paving the way to controlling plant invasion by bacteria, oomycetes, fungi, and nematodes; whenever we know they have a protease to secrete in the host.

Decoy engineering of the receptor‐like cytoplasmic kinase StPBS1 to defend against virus infection in potato.

TITLE IMAGE: Demonstration of transgenic host plant resistance to Potato Virus Y (PVY). Photographs of WT potato plant (upper left) and leaf (lower left) displaying symptoms of  PVY infection. Images of transgenic potato plants at the centre (with StPBS1) and right (StPBS1Nla) appear to be green and healthy, despite inoculation with PVY. All images used with permission of the author.