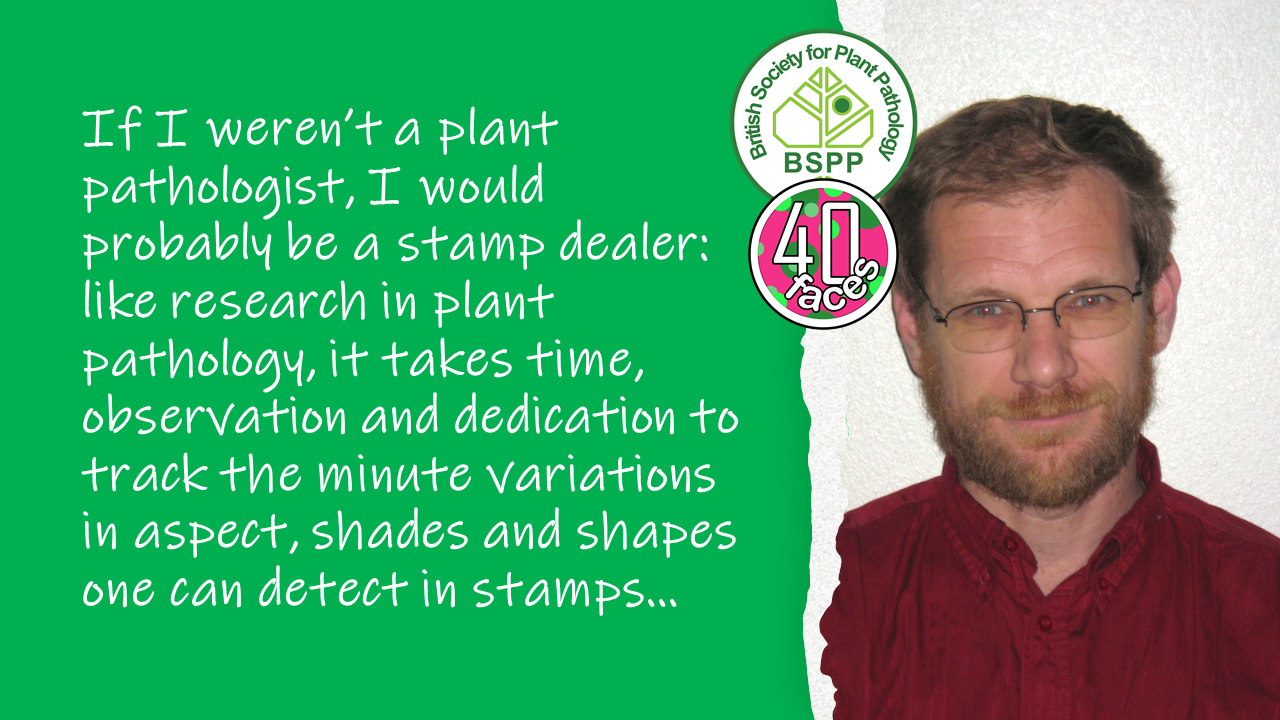 Didier Andrivon is one of our ’40 Faces of Plant Pathology’

BSPP members can be found in 51 different countries, with 30% of members based in countries outside of the UK. As part of the BSPPs 40th anniversary, we asked our membership to describe some things about themselves, what plant pathology challenges they would most like to see solved, and what could improve the world of plant pathology in terms of inclusivity. Click here to return to the 40 Faces Home Page.

My research deals with the population biology, including epidemiology and evolution, of fungal and oomycete obligate plant pathogens in response to control measures, notably host resistance. While my PhD dealt with a true fungus and a true obligate pathogen – the barley powdery mildew agent Erysiphe (now Blumeria) graminis f.sp. hordei -, I have spend the last thirty years studying a false fungus and so-called hemibiotroph – the infamous late blight pathogen Phytophthora infestans.

I was trained as an agronomy engineer – and discovered plant pathology then. The starting point was the farmer who hosted me for my on-farm training periods: he showed me the symptoms – and taught me how and what to observe, he brought me to the variety trials and observations he was carrying out for the Plant Protection service, and he shared his enthusiasm for integrated plant protection at a time where it was not yet popular with farmers. Without this hands-on experience, I’d probably never even bothered about plants being ill…

The second step was a research training period I made the next year – already with potatoes, and already with fungi. The combination of these two experiences made me sure I wanted to be a researcher in plant pathology!

What, only one? Too many problems, too few solutions, I’m afraid.

Breaking disciplinary barriers: to me, scientific disciplines are great as long as one can go over there and use the knowledge from other disciplines to solve the problems at hand. Many of the greatest advances in plant pathology came from other disciplines: Vanderplank was a chemist who used the logistic curves he knew from enzymology to describe epidemics; Austin Bourke was a meteorologist who traced back the course of early late blight epidemics. Conversely, plant pathologists have made lasting contributions to other disciplines: HH Flor influenced generations of plant breeders with his gene-for-gene theory, as did Nobel Prize winner Norman Borlaug. Plant pathology to me is not a scientific discipline: it is an area to combine many disciplines to solve problems and help feed the world sustainably.

Probably a stamp dealer : like research in plant pathology, it takes time, observation and dedication to track the minute variations in aspect, shades and shapes one can detect in stamps; it takes also the will to put things together, and make a coherent unit from disparate pieces. As you have probably understood, I collect stamps as one of my hobbies!

Click here to return to the 40 Faces Home Page.