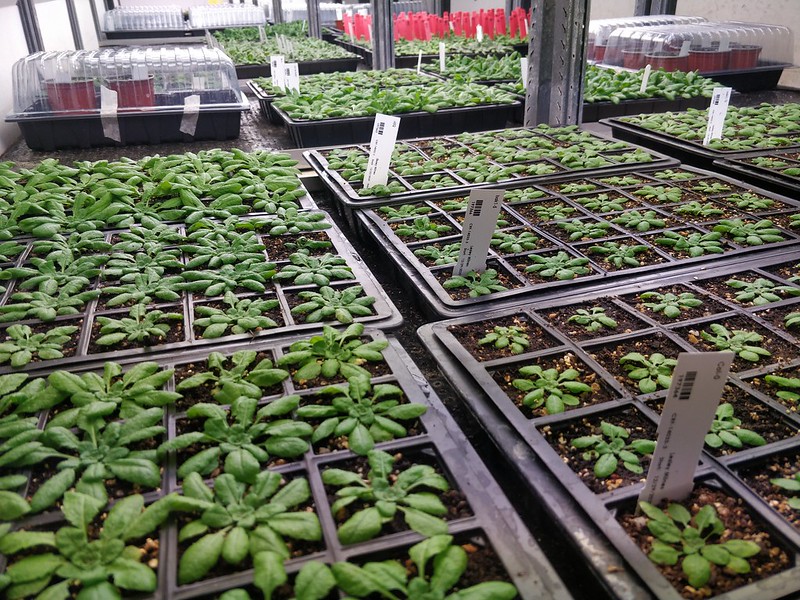 Written by Imogen Hockenhull, University of York. This is the report from a BSPP Undergraduate Summer Vacation Bursary. Click here to read more/apply for one yourself.

With the ever-growing demand for food supplies, our current methods of crop production are falling short. Yields that once provided food in abundance, are now projected too small to handle the population and its growth. Because of this, agriculture has begun leaning heavily on unstable practices like monocultures and copious amounts of pesticides to pick up the slack. Methods that, whilst effective, expose our crops to a huge amount of vulnerability; one need only recall the Irish Famine to appreciate the dangers of disease.

With increasingly more regulatory restrictions on pesticides being enforced, it is becoming crucial that we develop new ways to reduce pathogen-associated crop losses. That is why, over the summer of 2020 I underwent a placement within Professor Katherine Denby’s lab at the Centre for Novel Agricultural Products (CNAP), University of York, where I characterised the resistance of WRKY60 transgenic Arabidopsis plants to B. cinerea.

The necrotrophic airborne fungal pathogen Botrytis cinerea is widely recognised as the grey mould found on fruits and vegetables. In over 200 crops hosts worldwide it causes expanding necrosis through the release of toxic molecules, striking a large blow on pre- and post-harvest yields. During infection, B. cinerea differentially regulates several genes in what is assumed to be an attempt to subvert the host’s immune response. As such, genes that would otherwise provide a positive plant defence phenotype are down regulated by B. cinerea, increasing host susceptibility. One such gene downregulated during infection was WRKY60, a member of the DNA binding transcription factors thought to have a role in plant defense response, and the focus of my placement.

From this knowledge came the proposal that creating transgenic lines, which upregulate these differentially expressed genes, may provide an increased plant resistance response to pathogen infection. I investigated the hypothesis that transgenic Arabidopsis lines, in which WRKY60 was regulated by the promoters of genes highly upregulated during infection (proSAP12 and proANAC055), would result in higher WRKY60 expression and as such would increase plant resistance.

I conducted qPCR experiments to determine the expression of WRKY60 and the selected promoters in mock and B. cinerea infected wild-type Arabidopsis plants to confirm the results of previous studies. Both promoters showed, as expected, a small significant upregulation 26 hours post-infection, whilst WRKY60 did not significantly differ. Four proSAP12::WRKY60 transgenic lines and two proANAC055::WRKY60 were then tested through similar methods for the post-infection expression of WRKY60. In 50% of the proSAP12::WRKY60 lines, WRKY60 was found to be expressed at a significantly higher level than wild-type. Interestingly, one proANAC055::WRKY60 line was found to be significantly lower expressed compared to wild-type, however this may be due to silencing resulting from the presence of multiple copies of the gene.

Following these results, I carried out a series of infection assays in which I recorded lesion areas surrounding a single drop of B. cinerea suspension placed on wild-type and transgenic lines 72- and 96-hours post-infection. However, the infection seemed unsuccessful and as such, no lines showed any obvious difference in susceptibility. Whilst the lack of visual response suggests that WRKY60 has a somewhat small role within the plant defense response, and its relatively small upregulation had no effect on plant resistance, no real conclusions could have been made from the assays. Ideally, in the future the assays would be repeated to confidently make conclusions on WRKY60 expression.

I was also fortunate enough to play a small role within a second project within the lab, in which a Vertical Farm is being established within York. It is an extremely exciting opportunity and I look forward to seeing how it progresses. Hopefully, I will be able to contribute further in the future.

Throughout my studentship, I gained not only a series of laboratory skills that will transfer to future projects, but the confidence in my ability to apply these skills and work independently, making conclusions and decisions about the path my project needed to follow. I would like to thank the Denby Lab team for allowing me to get the most out of this placement, as well as a particular thank you to both my direct supervisor Dr Fabian Vaistij for his support, and Professor Katherine Denby for allowing me to undergo this opportunity despite all the current obstacles of 2020.