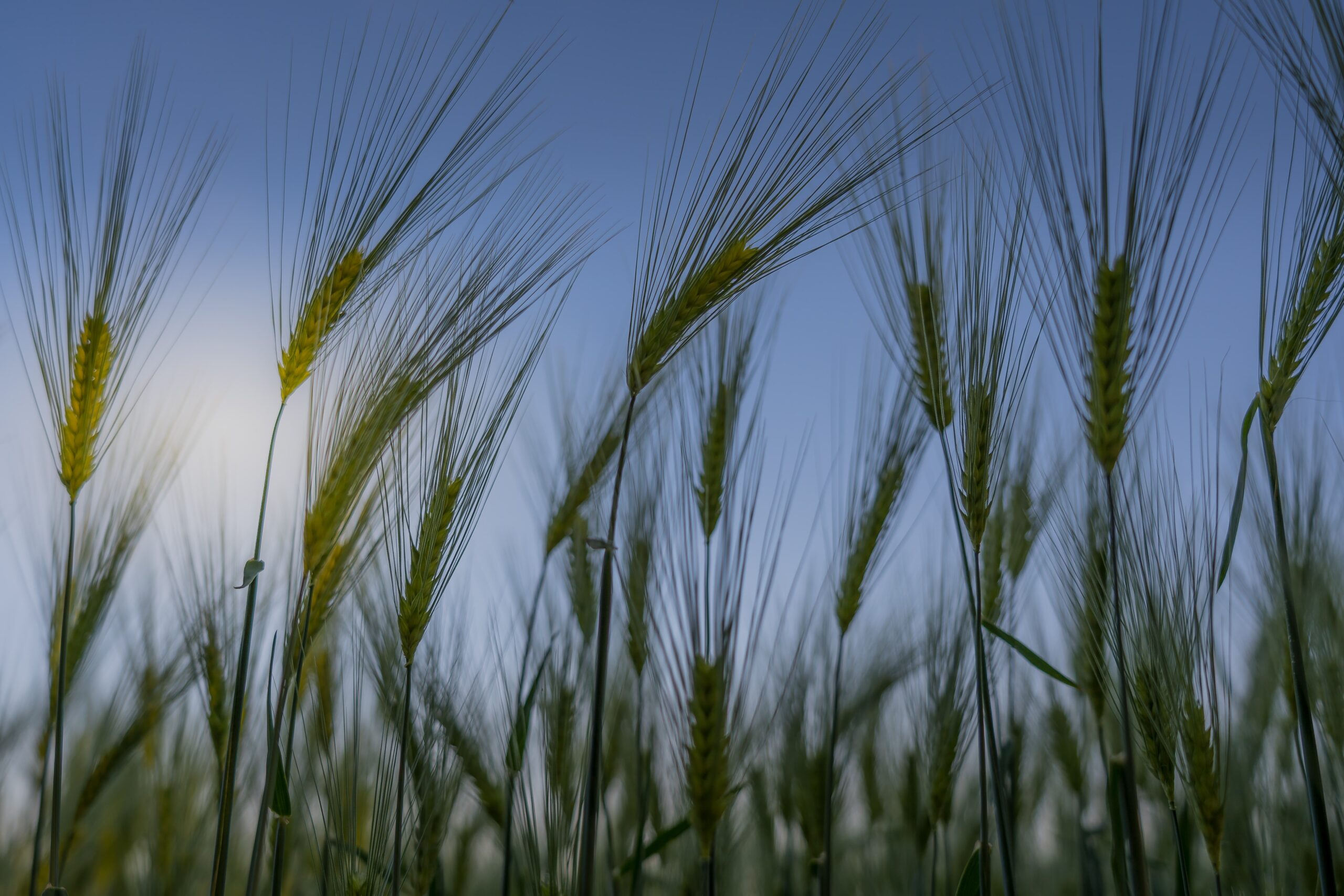 Dr Cunniffe or: How I Learned to Stop Worrying and Love Crop Mixtures (A BSPP ‘Lockdown’ Bursary Report)

Written by Oisin Kim. This is the report from a 2020 BSPP Lockdown Bursary. Click here to read more/apply for one yourself.

The year 2020 will always be linked in my memory with the mathematical study of disease, for both global and personal reasons. During the peak of lockdown in summer, I watched a lecture given by my college tutor, Dr Robin Thompson, about the mathematics behind the current pandemic and the measures being taken by the government. I was already interested in mathematical biology, and after speaking to Robin I was introduced to Dr Nik Cunniffe at Cambridge, who suggested the possibility of a summer project with the BSPP. Studying maths at Oxford is a rewarding but often very abstract activity, so the idea of research in an area such as plant disease was immediately attractive to me, particularly with contemporary events. After a period of back and forth, we decided on a topic based on Nik’s previous work with a collaborator of his, Dr Alexey Mikaberidze at the University of Reading.

In 2014, Alexey published a paper concerning the spread of multiple pathogens in multiple cultivar hosts. It has long been broadly understood that mixing different cultivars of a given crop in a single field could decrease disease: for example, the success of mixtures in the former East Germany, where ‘the percentage of the barley crop sown to variety mixtures… increased from 0 to 92%… while mildew incidence declined by 80% and fungicide use also declined by 80%’. What Alexey sought to do in his paper was to better understand the mathematical mechanisms behind the phenomenon, as deeper insight could lead to better mixtures being designed: as he put it, mixtures are not currently widely accepted by farmers because ‘outcomes exhibit a wide variation’.

Naturally, Alexey’s model included the possibility that a certain pathogen strain could be more specialised on a particular host cultivar: this information was communicated in his different transmission rates. Nevertheless, there was one area where his model could possibly be expanded: as Nik pointed out, it assumed infected tissue behaved the same way once infected by the same pathogen strain, regardless of the host tissue. The dynamical system model divided the ‘infected’ tissue into classes based only on the pathogen; there was therefore no possibility within the framework for allowing a particular host infected with a particular pathogen to be differently infectious than other hosts infected with the same type of pathogen. The natural idea was therefore to relax this assumption, further subdividing the infected classes based on host cultivar, and then to explore the model’s behaviours in the hopes that mixtures could be better understood.

My work on this topic started with setting up the new theoretical framework and proceeded to a lot of MATLAB coding, alongside weekly meetings with Nik, Robin and Alexey to discuss results and future possibilities. For simplicity, my research focussed on the case of two pathogens and two host cultivars. Once the basis for the theory was established, I sought to find the long-term stable equilibria and understand how disease severity varied over different mixtures, as the proportion of a particular host changed in the mixture from 0 to 1. Specifically, I sought to classify different broad model behaviours, because different sets of parameters produced dramatic changes in how the severity varied as the host proportions changed in the mixture. Here, severity was defined as the long-term proportion of tissue in the infected classes, once the stable equilibrium was reached. What quickly became apparent was that direct algebraic solutions for the system were prohibitively complicated to find, with non-trivial solutions taking over 20 lines to write. Luckily, with the help of MATLAB I was able to find the number and stability of solutions computationally, without the need for closed form expressions.

Naturally, there were a number of obstacles along the way, but whenever I felt stuck my supervisors were always very helpful in providing guidance and potential directions. An example of a typical diagram I would produce is Figure 1. What quickly became apparent was that there was a general qualitative difference in behaviours when compared with Alexey’s model. Whilst Alexey’s model produced exact linear trade-offs between the proportions of pathogens 1 and 2 at equilibrium, so that the severity graphs appeared like Figure 2, my model produced nonlinear severity behaviours. This was promising for a particular case of transmission parameters, where a ‘curved’ severity plot was more in line with empirical findings conducted on the specific case of two strands of STB infecting two cultivars of Durum wheat. The new severity plots also had interesting biological implications: we see the severity is minimised for a range of cultivar proportions in Alexey’s model but for a specific value in the new framework. This suggested it might be more important than previously thought to identify the optimal host proportions in a mixture, raising interesting questions when epidemiological parameters are only poorly characterised.

The weeks went by, and I was shocked when I realised the project was almost over: caught in the excitement of research I completely lost track of time. I am left with the sense that the process of scientifically understanding diseases made the mental trials of lockdown far more bearable, for vague philosophical reasons. In the end, the project was tremendously rewarding, giving me an insight into real scientific activity whilst also giving me the perk of being able to say I have worked as a researcher at Cambridge, a bonus I have definitely used in job applications. Nik and I have discussed the possibility of a possible publication, and at the very least another student will be able to carry on my work next summer. Ultimately, it is very fun to have contributed to the field, even in such a small way, and I would absolutely recommend the BSPP bursary to any students thinking about applying.

Figure 1: Non-linear responses to proportion of host type 1, for some set of parameters. Legend indicates which pathogen type each plot corresponds to. 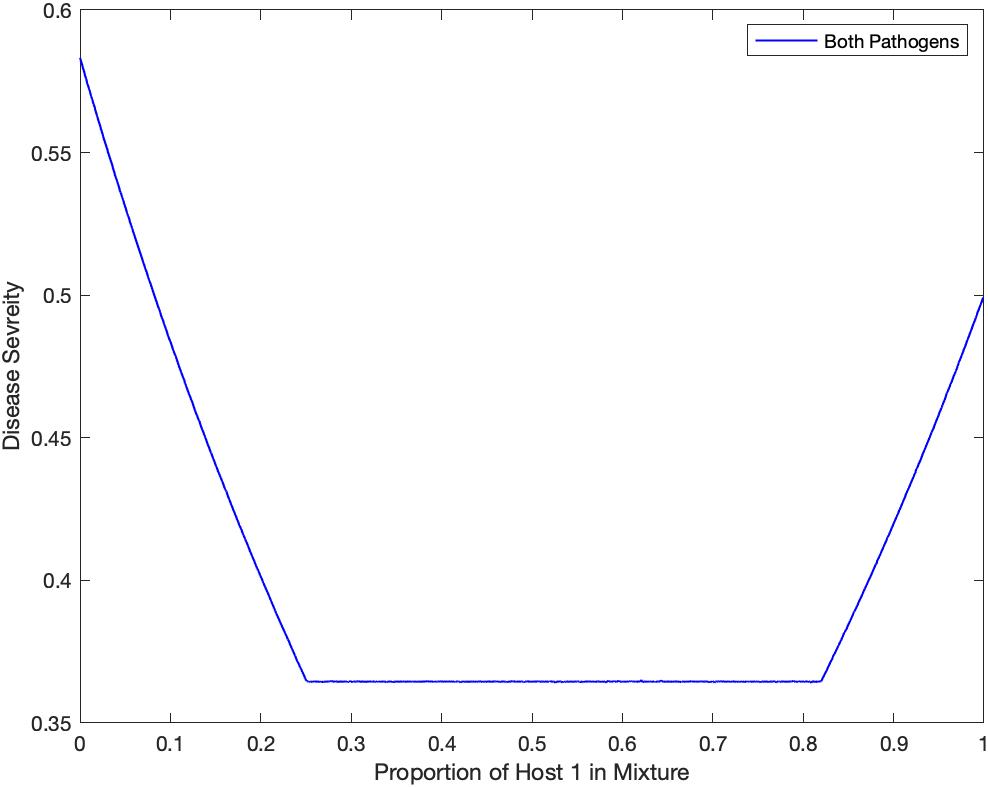