Food security is a growing issue as worldwide populations increase. Minimising crops lost to pests and pathogens is important in order to keep food on the plates of people worldwide. Sarah Gurr’s lab at University of Exeter focuses on combating crop pathogens, particularly diseases caused by fungal infections, with members of the lab working on the notorious Tropical Race 4 Fusarium that threatens bananas globally. My project focused on wheat and the hemibiotrophic pathogens Zymoseptoria tritici, which causes leaf botch, and Pseudomonas atrofaciens, which causes basal glume rot. The project follows the principles of stress based plant defence priming, in which plants are grown under stressful conditions, causing an activation of their defence pathways, making them less susceptible to pathogen infection.

The work builds on previous research done by my supervisor Helen Fones, which used high nitrogen concentrations as a stressor in the model plant Arabidopsis thaliana. This work showed that increasing nitrogen concentrations in a 3:1 ratio of (NO3– : NH4+) increased the plants’ susceptibility to the hemibiotrophic pathogen Pseudomonas syringae, while plants grown on the same concentration at a 1:1 ratio were less susceptible to the pathogen compared to their 3:1 counterparts. The aim for my project was to see if this 1:1 fertilisation had the same effect on wheat, making plants less susceptible to Zymoseptoria tritici and Pseudomonas atrofaciens, and to try and untangle whether this decreased susceptibility was due to a direct effect of the nitrogen levels on the pathogen or whether it was due to the changed ratio of nitrogen ions interacting with the plant defence pathway and altering defence priming.

Wheat was grown in hydroponics across a range of nitrogen concentrations at both 3:1 (NO3– : NH4+) and 1:1 before being spray inoculated with Zymoseptoria tritici. The susceptibility of plants was measured by counting of pycnidia (the fungi’s asexual fruiting body). Results showed the same pattern as previous work by Helen Fones, with increasing concentrations at 3:1 promoting disease, while 1:1 nitrogen fertilised plants at the same concentrations showed less disease.

Pseudomonas atrofaciens was used for trying to untangle whether the responses seen were due to plant defence priming or directly due to nitrogen levels on the pathogen due to the quick infection time allowing me to gather lots of data. In vitro growth cultures showed that P. atrofaciens grew at a higher rate in 3:1 and 1:1 (NO3– : NH4+) between 32 mM and 96 mM concentrations of nitrogen compared to the 16 mM 3:1 control. Foliar fertilisation experiments also indicated signs that increasing nitrogen concentrations at both 3:1 and 1:1 promoted growth of P. atrofaciens sprayed onto the leaves. Wheat grown in hydroponics at the same nitrogen concentrations was also infected by infiltration as well as spray. These results told a different story, with increasing nitrogen concentration suppressing P. atrofaciens growth, with 1:1 ratio supressing slightly faster than the 3:1 ratio. This reversal of fate for the bacteria when the increasing nitrogen is in the plant, as opposed to on the leaves or simply in culture with the pathogen, indicates that the nitrogen is influencing the plants defences.

I thoroughly enjoyed my time in the lab at Exeter, it has given me a real insight into the workings of a research lab and understanding of what a career in academia might entail. I also enjoyed having the opportunity to carry out some techniques and protocols I have not had a chance to do at university yet such as RNA extraction and PCR. I’d like to thank Sarah and Helen, along with everybody else in the Gurr lab that made me feel very welcome and helped me along the way even when I did spill agar all over the lab.

Wheat transferred into hydroponics of differing nitrogen concentrations in the growth chamber. 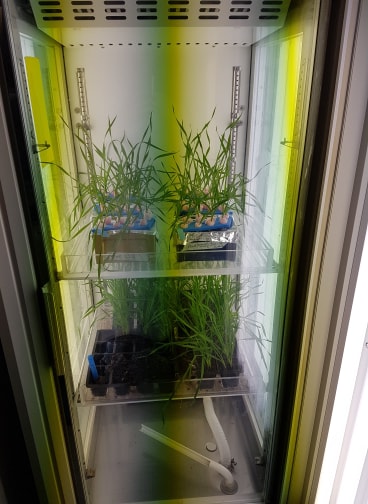