Oilseed rape (Brassica napus) (OSR) is a globally important crop. In the UK, 564 000 ha of oilseed rape were farmed in 2018. It is used for animal consumption, in food products, as a biodiesel and it can be used to improve soil stability for crop rotation. However, diseases threaten the production of this crop. One of these detrimental diseases is phoma stem canker, which causes yield losses of more than £80M each year. This disease is caused by two fungal species: Leptosphaeria maculans and L. biglobosa. L. maculans is considered as more damaging compared to L. biglobosa. Ascospores of either or both species land on leaves causing phoma leaf spots (in autumn) and grow along the leaf petioles into the stem causing stem base canker and/or upper stem lesions (in summer). The canker can cause premature senescence, lodging and death. L. biglobosa is less intensely studied but is becoming an emerging threat in the UK. Recent studies show that L. biglobosa can also cause severe stem canker leading to considerable yield losses. The aim of my bursary was to investigate the effectiveness of different disease management methods on control of L. maculans and L. biglobosa.

The first part of my project included assessment in OSR field experiments to investigate the effects of cultivar resistance and fungicides. Within the first two weeks of my bursary, I had already visited two field sites, where I was taught how to sample oilseed rape plants, identify the symptoms of phoma stem canker and then how to assess the severity of stem canker. The canker was assessed using a 0 to 7 scale where 0 was no canker in the stem and 7 was 100% canker with stem being dry and broken. At both sites, very severe canker was observed on susceptible cultivar Marathon compared to the resistant cultivar Harper, in untreated plots. In the fungicide treated plots, there was a considerable reduction in the stem canker severity on both the cultivars. This showed me the importance of combining different disease control measures. Considering the timing of fungicide applications, the best time to spray was found to be the late spray made in autumn. Late spraying also appeared to be more/equally effective than spraying at both the early and late stages.

Throughout the bursary project, my knowledge of oilseed rape and L. maculans and L. biglobosa has improved dramatically as well as my molecular and applied laboratory techniques and my experience of working in the field. I learned techniques such as extracting DNA using a DNAMITE plant DNA extraction kit, quantifying DNA concentration using a Qubit fluorometer and quantitative PCR. I have also made fungal culture media, poured agar plates, made conidial spore suspensions to inoculate cotyledons and learned various parameters of yield assessment such as Thousand Seed Weight (TSW) measurements. All of the techniques that I have learned throughout this bursary have been new to me and I am very grateful for being taught them. I have had an invaluable insight to the world of agricultural academia and has seriously made me consider going into academia. I would recommend this experience to future bursary students. I would like to thank the BSPP for funding me for this fantastic 10-week bursary, the Crop and Environmental Protection group, everyone in the labs and a special thanks to Dr Yongju Huang and PhD student, Fadeke Fajemisin and especially to my supervisor, Dr Chinthani Karandeni-Dewage.

Lucy working in the lab. 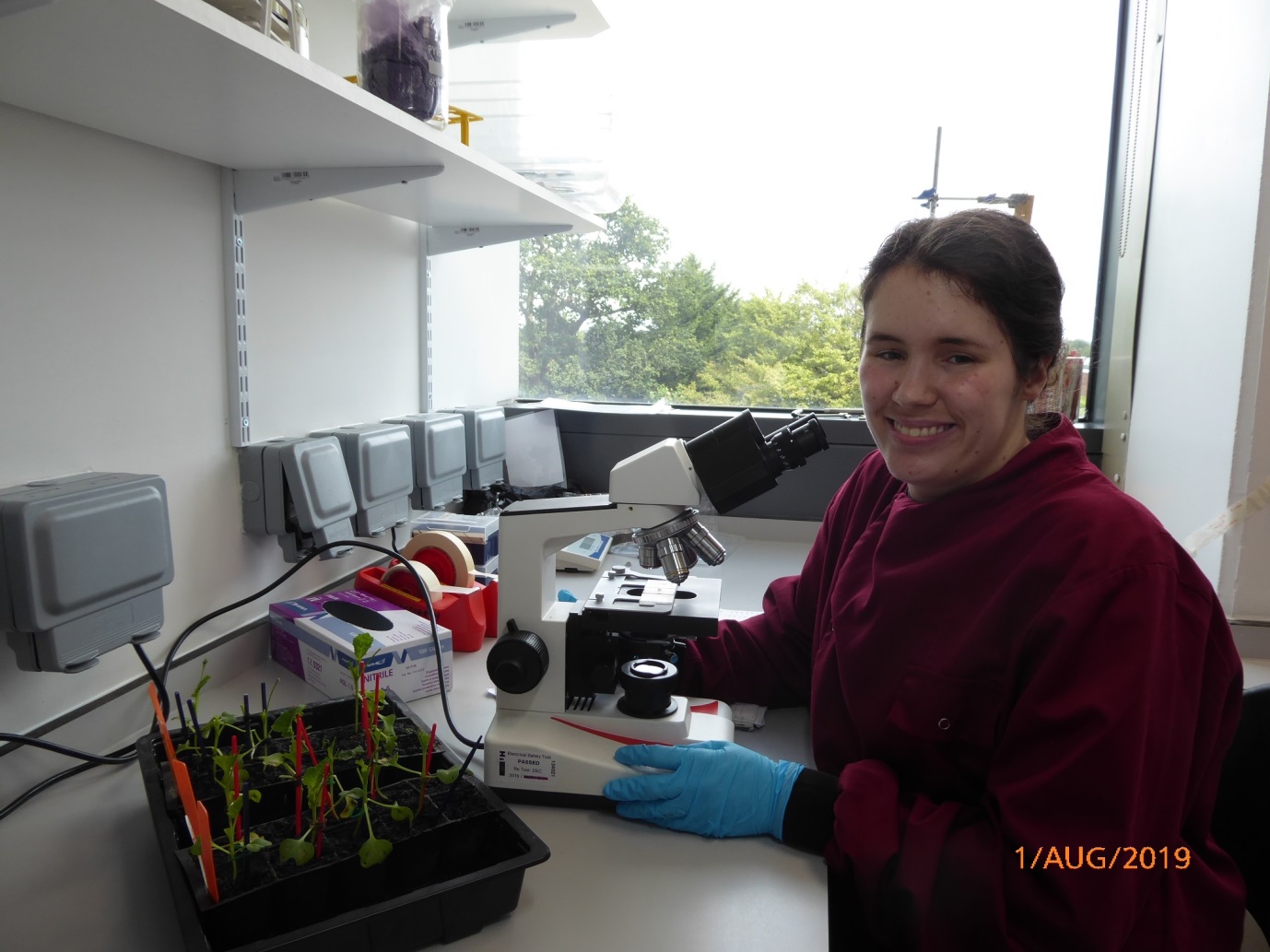