Phoma stem canker is a severe disease that affects large number of oilseed rape crops in England every year, despite the fungicide treatments. The disease is spread by air-borne pathogen spores and it is transmitted from diseased crop debris to young healthy plants, during warm, wet periods. The pathogens responsible are Leptosphaeria maculans and L. biglobosa, each one forming a distinct lesion, but both reducing the yield by interrupting the water and nutrient transportation through the stem. As a result, plants undergo premature ripening and death which is seen in crops during summer.

After the second year of my degree (Molecular Biology) at the University of Hertfordshire, I was given the great opportunity to work with the Crop and Environmental Protection Group of UH during the summer on a BSPP supported bursary. This research group is focused on designing strategies, friendly to the environment, which will target crop diseases. To do so, a clear understanding of the factors that lead to epidemic development is required.

Firstly, my project fitted under this general research theme. Leptosphaeria maculans and L. biglobosa were examined for the expression of necrosis and ethylene-inducing peptide 1 (Nep1)- like proteins (NLPs). This was done by growing both pathogens in potato dextrose broth (PDB), harvesting the mycelium and performing RNA extraction using an RNeasy Mini Kit. Extracted RNA was used to synthesise c-DNA and the NLPs were amplified using specifically designed primers. The amplicons were run in agarose gels and visualised under UV light. The expression pattern obtained from the liquid cultures regarding NLPs showed that L. maculans expressed both NLPLm1 and NLPLm2, in contrast to L. biglobosa that did not express NLPLb in vitro. This suggests that further investigation can be carried out in vivo, at different time points following inoculation to examine the role of NLPs in Leptosphaeria species during disease progression.

Secondly, L. biglobosa which was modified expressing green fluorescence protein (GFP) was used to study the pathogen abundance. Fluorescence intensity was assessed at different time points after inoculation and related to the susceptibility of different cultivars to the pathogen. Three different treatments were applied on to the Brassica napus cultivar Excel (already used in previous assays); inoculation with Lb-GFP or wild type Lb at a concentration of 107 spores/ml or with water (control). The samplings were done 7 and 14 days post inoculation. Symptoms were recorded after 21 dpi. Moreover, seedlings of a group of 11 B. napus cultivars were inoculated with Lb-GFP at a concentration of 107 spores/ml or with water (control). The samples used for analysis were leaf discs 5mm2 in area; liquid nitrogen was used to deep freeze prior to the protein extraction, which was done using the tissue lyser Retsch MM400 and 50mM of sodium phosphate as the extraction buffer. The protein extracts were quantified using Qubit Assay and the fluorescence was quantified via the fluorometer CLARIOstar – BMG Labtech. 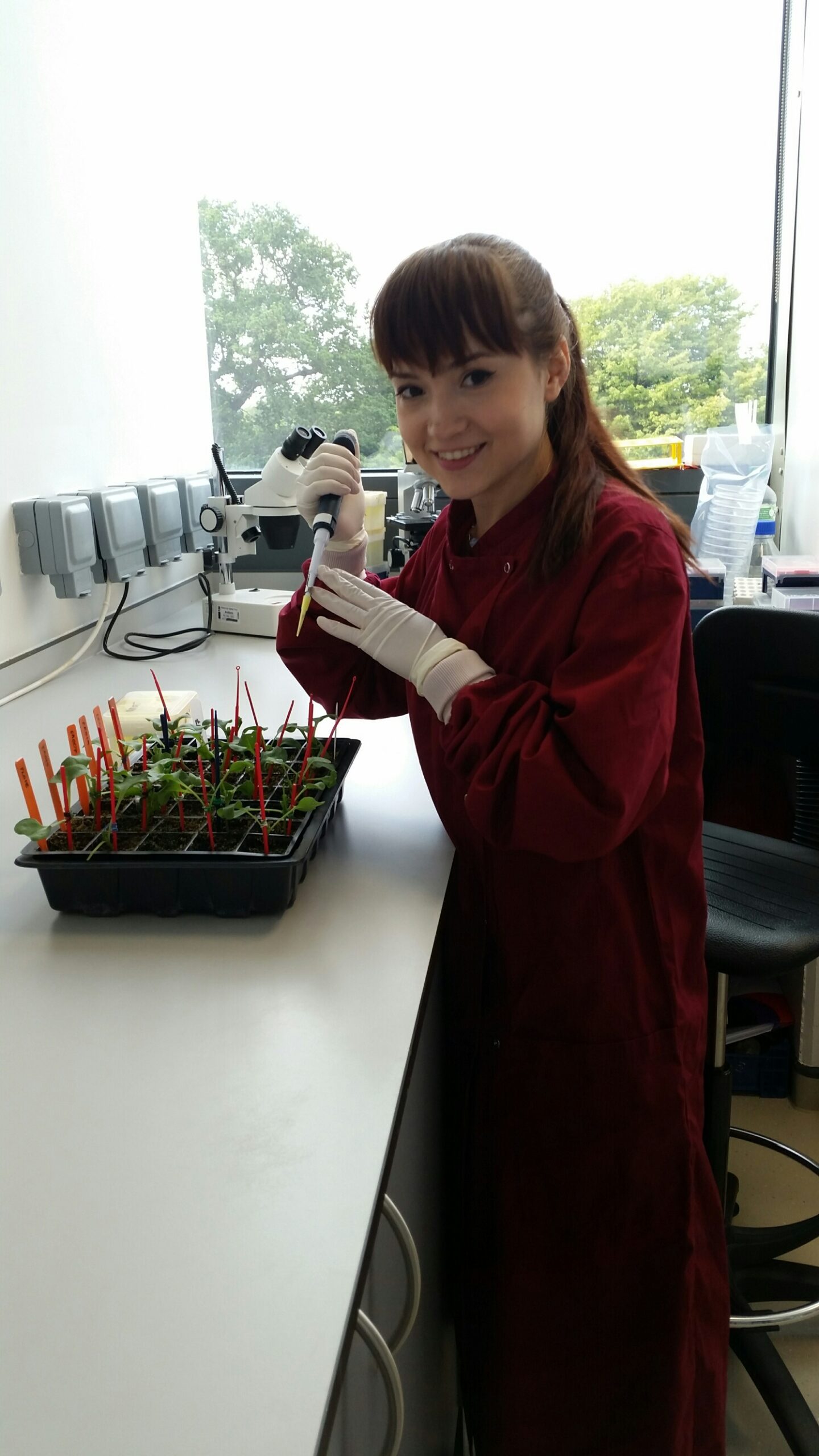 Remila working in the lab

Based on the symptom assessments in these experiments, the lesion size on Excel plants increased considerably from 7dpi to 14dpi. There were differences in the lesion sizes between the 11 cultivars, which indicate differences in susceptibility to the pathogen between the cultivars. GFP protein was detected in Lb-GFP treated plants; however it was not easy to relate this to the susceptibility of the cultivars based on the symptom assessments. For future work, it is recommended to work with a larger amount of plant tissue and use a more efficient protein extraction technique. Also, time points with shorter intervals would give us more information about the progression of the pathogen. Finally, exploiting antibody-antigen interactions, attempting to detect GFP in the samples, would provide more accurate results as it is a more sensitive approach.

This summer bursary was a unique experience which undoubtedly enhanced my laboratory skills and knowledge. I practised techniques and used equipment provided in different research labs, which is the best preparation for my final year project. I want to particularly thank my supervisor Georgia Mitrousia who supported me all the way, guided this work with professionalism, enthusiasm and patience and encouraged me to be independent and confident in the lab. This study during the summer raised more questions, but also provided the Crop and Environmental Protection Group with important information complementing the general research, which made my work more valuable.

And this week CONNECTED members are coming together with many other #plantpathologists and #entomologists for our online conference - we look forward to seeing you! #NewCONNECTIONS 🪲🌾🌱 https://twitter.com/btemukoye/status/1541091891067981826

Hot off the press! Have you seen our most recent paper in @BS_PP new disease reports?
A powdery mildew species (Erysiphe elevata) known to infect Catalpa sp has been found to cause disease in a new host, cranberry.
https://bsppjournals.onlinelibrary.wiley.com/doi/epdf/10.1002/ndr2.12099