This summer I have spent eight weeks working with Plant Health at RHS Wisley under the supervision of Dr Matthew Cromey and Dr Rebekah Robinson. One of their main research fields is the control and treatment of plants infected with Armillaria spp. (commonly known as honey fungus). Of all the diseases identified on samples sent to the RHS between 2001 and 2016, 17.6% were identified as Armillaria spp., making this one of the most common garden diseases.

My research focussed on the fungal endophyte Trichoderma, its potential as a biocontrol agent against Armillaria and potential beneficial impacts on growth and vigour of plants. Trichoderma colonies are prevalent in soils however beneficial effects on plants are not always present as not all strains can form endophytic relationships. To identify endophytic strains I optimised sterilisation methods based on work by Robert Hill studying tree species in New Zealand. An efficient method of sterilisation was produced resulting in Trichoderma isolation from roots within 7-10 days from the point of sampling. A trial was conducted to explore the location of Trichoderma within the root segments indicating more efficient isolation from slightly thicker root diameters of approximately 2-5mm. 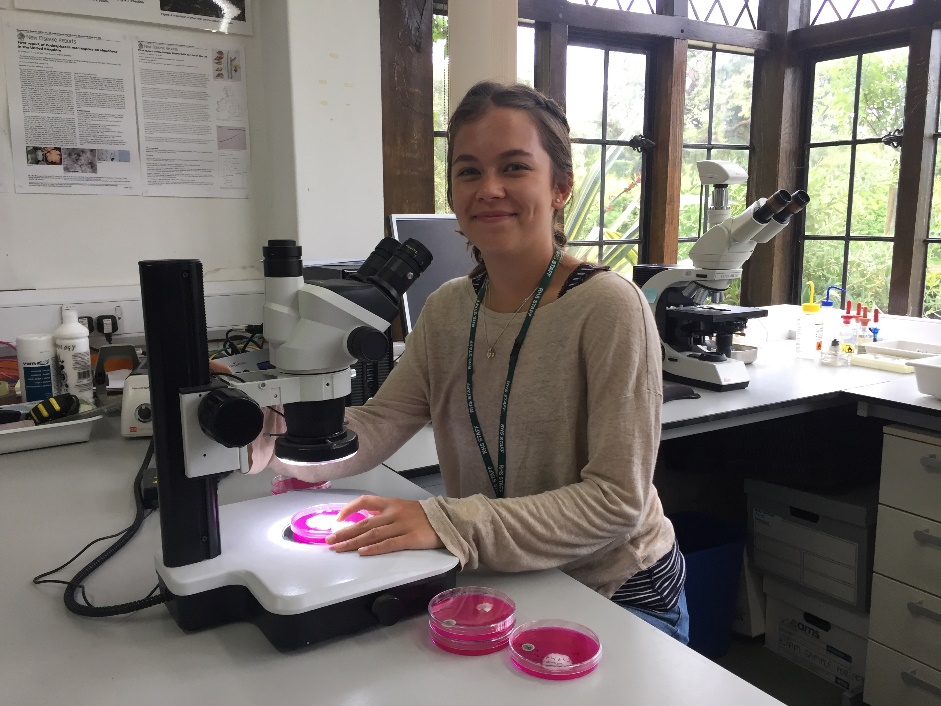 Niamah working in the lab

Cultured isolates from root sampling were sequenced at a number of regions to determine the most useful region for molecular identification. This involved DNA isolation and the development of PCR techniques. The tef1 elongation factor region provided a more in-depth species level identification than ITS regions. However the chi18-5 region was a useful addition to confirm tef1 findings. The lack of sequence data on DNA databases proved to be a limiting factor for successful Trichoderma identification. This genus contains over 200 named species but only 92 sequences from six species are contained within the NCBI database. This lack of sequences indicates that more research and additions into the TrichoBLAST (isth.info) and NCBI databases is essential.

Two characteristics of Trichoderma were assessed in separate trials. The first determined if root dipping or pouring inoculum onto soil had differing impacts on stem growth. Neither method produced significant effects on growth when compared to the control. However, given the time constraints (plant growth was limited to 5 weeks) and the impact of unforeseen physical damage to the plants, further work is needed.

Secondly the interaction of Trichoderma with A. mellea (the most frequently isolated Armillaria sp.) was assessed. Specifically, whether different strains or species of Trichoderma had differing radial inhibition and visual characteristics in their interactions with the pathogen. This was assessed on malt extract agar under natural daylight and dark incubator conditions. T. atrobrunneum had the largest effect of inhibition on the radial growth of A. mellea. Visual observations noted this strain also contained the largest area of sporulation over A. mellea when compared to the other species. A development of this study would be to trial replicates of each species to confirm which species has the highest inhibitory effect, and then to investigate whether this inhibition in culture translates to disease resistance and plant growth promotion in a pot experiment.