Puccinia striiformis, the causal agent of yellow rust, is an obligate biotrophic basidiomycete that infects cereal crops such as wheat, barley, triticale and rye resulting in significant reductions in grain quality and yield. Recently a genomics-led surveillance study (field pathogenomics) by the Saunders’ lab revealed a shift in the current UK P. striiformis population and identified new emerging strains which have the capacity to infect previously-resistant varieties of wheat. Hence, it is imperative that pathogen-induced modulation of host gene expression upon infection is well characterised in order to identify novel resistance strategies, for deployment in agriculture to ensure world food security.

Whilst working with Pilar Corredor-Moreno in Diane Saunders’ group at the John Innes Centre our central aim was to functionally characterise host wheat genes using two reverse genetic strategies, which would help to elucidate their roles in disease progression. Previously, differential expression analysis of transcriptomic data obtained from infected field samples coupled with controlled infections of susceptible hexaploid (AABBDD) wheat varieties inoculated with different virulent P. striiformis strains had identified that chloroplast-related genes play crucial roles during pathogenesis. It is thought that biotrophic pathogens target the chloroplast to alter photosynthesis and obtain energy-rich nutrients vital for its own asexual reproduction and colonisation on wheat. One chloroplast-related gene was then selected for my research project, with the aim to evaluate its role during pathogenesis by perturbing its function using two independent methods: (i) utilising gene-specific TILLING (Targeted Induced Local Lesions IN genomes) mutants, and (ii) inducing Virus Induced Gene Silencing (VIGs) for the gene of interest.

The first reverse genetics strategy utilised EMS-induced TILLING mutagenic lines of tetraploid (AABB) wheat that were crossed to obtain homozygous knockout lines of the chloroplast-related gene of interest for either the A or the B homoalleles, which were later infected with a current UK P. striiformis isolate to score phenotypes ranging from highly susceptible to resistant. However, unfortunately only heterozygotes for the A homoallele (AaBB) could be recovered (as identified by PCR and Sanger sequencing). This heterozygosity might be attributed to lethality of the single knock-out mutants, as a functional copy of the A homeolog may be required for viability. Targeted-CRISPR knockouts of each copy could confirm this hypothesis. During P. striiformis infection variable phenotypes ranging from partial to severe susceptibility were noted for the loss-of-function mutants in this gene compared to WT plants. Potentially, the reduction in net chloroplast-related metabolism may result in an increase in intermediate products such as triose phosphates, facilitating a higher production of sucrose enabling exploitation and pathogen colonization. Although TILLING can be an excellent resource to determine whether a specific mutation is responsible for a particular phenotype, further backcrosses to WT plants will be required to confirm the effect is due to this gene alone.

The second reverse genetics strategy involved VIGs using the Barley Stripe Mosaic Virus (BSMV) to transiently silence the target gene. BSMV acts as an efficient alternative to TILLING providing a high throughput platform for the investigation of host gene function during P. striiformis infection. It was possible to predict off target hits that the RNAi oligos may produce using the prediction software SiFi21. Ligation independent cloning was used to generate recombinant plasmids for the gene of interest, which were subsequently transformed into Agrobacterium tumefaciens and agro-infiltrated into Nicotiana benthamiana. Crude virions assembled in planta were then harvested for wheat inoculation onto wheat hexaploid Vuka cultivars.

Primers were designed to amplify homeolog-specific copies of the gene of interest to assess expression levels using RT-qPCR. Only A and B homeologs of the gene of interest demonstrated a marked decrease of ~2-fold reduction in expression levels with the D genome copy demonstrating a higher expression level relative to control. Interestingly, all plants acquired a striated phenotype – typical of BSMV symptoms in the field. Unfortunately, the plants did not survive long enough post-VIGs infection for P. striiformis colonisation as they were inoculated with high volumes of inoculant. Smaller volumes of inoculant are to be used in the future. Overall, VIGs has the potential to be a high-throughput tool to aid our understanding of host interactions with P. striiformis.

I would like to thank BSPP for funding my project. The experience of working in a multidisciplinary group has taught me invaluable skills such as problem solving, use of wheat-specific genetic resources, working with bacteria, viruses and class I and II pathogens. A special thank you to Pilar and Dr Diane Saunders for their continued support throughout my placement. 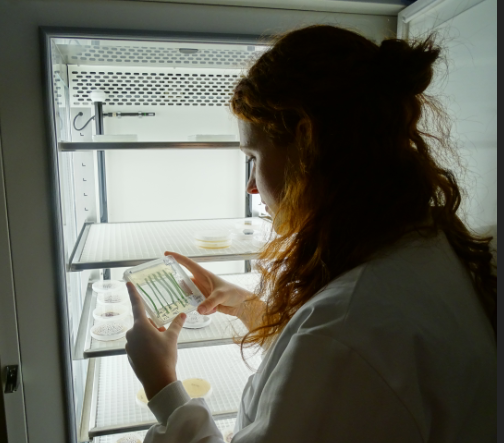 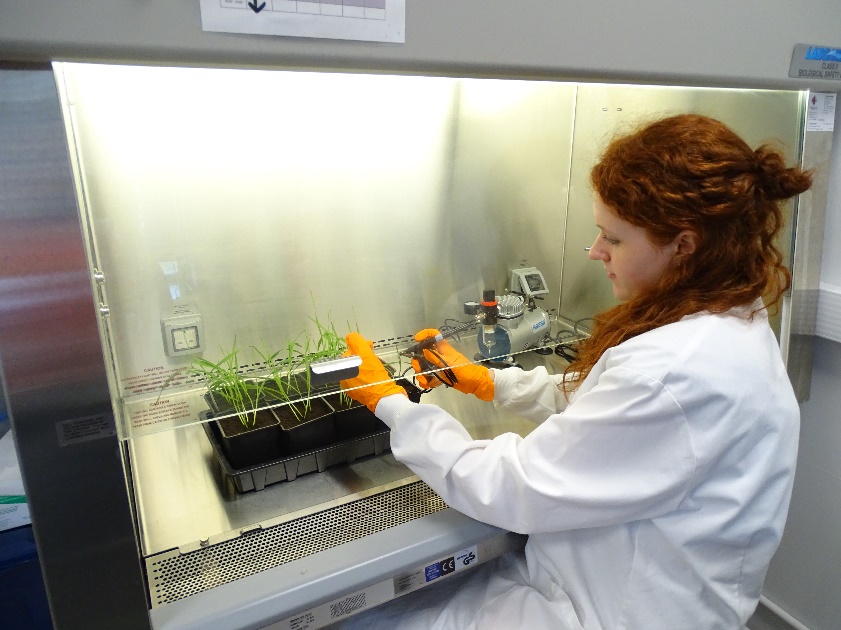