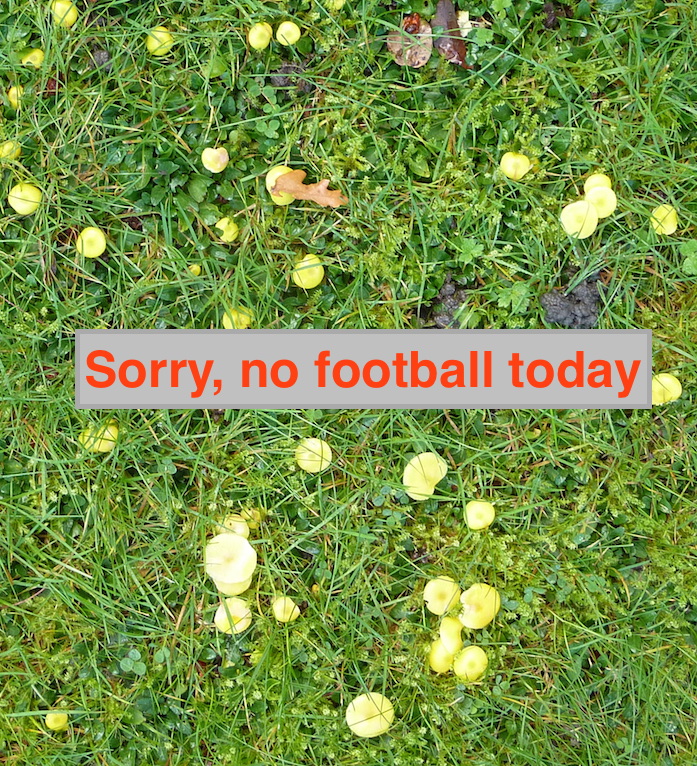 I keep my eye open for new and interesting diseases and noticed recently that one of the stated reasons for the cancellation of a recent big football match at the Beijing National Stadium was ‘fungus’.

So which one? I contacted a colleague working at the Institute of Plant Protection in the Chinese Academy for Agricultural Sciences for enlightenment, but they had not been consulted.

This doesn’t surprise me. Turf diseases occupy a specialised niche. What sets them apart is not the array of mostly well-known fungal diseases (with a few nasty nematodes added), but the need for diplomacy and urgent action in managing problems. Cancelling a match between Manchester United and Manchester City must have cost someone a lot of money – and embarrassment.

My PhD supervisor, Tom Preece, used to have regular discussions with a pathologist colleague at the then Sports Turf Research Institute in Bingley. I found the notion of studying turf grass amusing at the time, but it’s big, big business these days. STRI, as it is now known, is still going strong, and has a diagnostic and advisory service. Are any STRI staff members of BSPP? Just a thought, since I’ve never come across anyone, since leaving Leeds, who works on turf diseases.

The “football fungus” set me thinking about our own garden. Fortunately, there is no obvious disease affecting our meagre-looking lawn, but there are plenty of other pests and diseases to observe. The beans have aphids (they appear each year, like Christmas) and the spinach has a damaging leafminer. The grapevine has prolific mite damage and there are rusts on pear and chives. The ornamental Acer, now more than 10m tall, has been infected by honey fungus for many years. I’m watching it carefully for signs that Armillaria is winning. So far, so good (for the tree, that is).

Oh, and the flowering Nicotinias have spectacular symptoms suggesting tobacco mosaic virus (TMV). This panoply of pests and diseases is not wrecking the havoc that it might suggest. I am in fact curiously grateful that my attempts to grow vegetables and nurture ornamental plants and trees are being compromised. Each problem is an opportunity to test my own management skills. So I can report that, yes, you can squash the bean aphids and spray the plants with soapy water but even with only eight plants the little blighters reproduce far too quickly. A quick spray of acetamiprid did the trick. Where are all these natural enemies when you need them?

There’s nothing I can do about the pear rust – unless I can find the juniper which acts as the alternate host – and no amount of chemical warfare (only kidding) will banish TMV. TMV is mechanically transmitted and I did wonder if me brushing against the first affected plants was responsible for the spread of symptoms to neighbouring plants. Now I’m thinking that the young plants ordered online were already infected.

It’s difficult to know what to do about the unsightly damage caused by the mite on grapevine, now covered in a rash of blisters. I’m not sure I agree with the RHS that the mite is harmless: heavily blistered leaves fall prematurely. I might explore applying a mineral oil to the vines in winter and see if this blocks their spiracles and kills off the fiends.

These are my own Mini Challenges. Each pest and disease gets me thinking about what to do, the costs in time (mainly) and whether there is some form of rapid control. I test my own decisions against results and gain a little insight into how farmers – or people in charge of football pitches – might react to a pest or disease . When asked by a farmer or extension worker what to do about a disease or pest, I am acutely conscious of my minimal personal experience of growing plants – let alone farming. That’s why I’m grateful for the pests and diseases in my garden. I think.