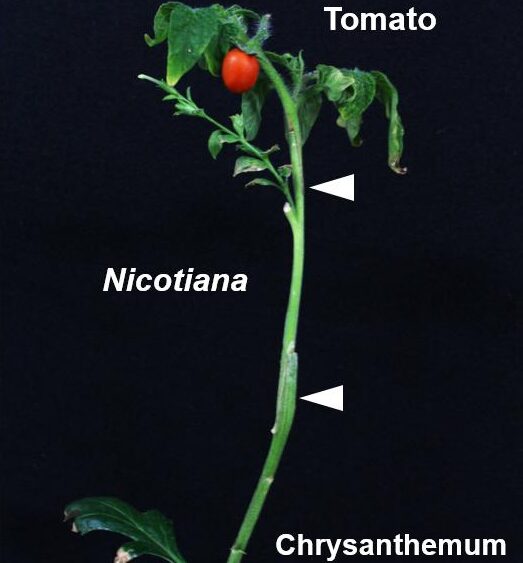 Scientists found that the tobacco plant Nicotiana can maintain grafts between a broad range of species. Using Nicotiana as an intermediary, they succeeded in indirectly grafting a tomato scion and a rootstock of Florist’s daisy, which bore a small fruit.

Grafting is a horticultural technique that joins plants together by means of tissue regeneration, combining desirable characteristics of both plants. Generally, grafts have been thought to be compatible only between the same or closely related species. However, scientists at Nagoya University and colleagues in Japan recently found that the tobacco plant Nicotiana benthamiana promotes adhesion of tissue and can maintain grafts between a broad range of species.

Their findings, published recently in the journal Science, have also shown that using tobacco as an intermediary, the upper part (scion) of a tomato plant grafted onto the lower part (rootstock) of a Chrysanthemum morifolium (widely known as Florist’s daisy) successfully bore fruit.

Grafting has been conducted for thousands of years for the propagation of fruits and vegetables, in which a productive scion is attached onto a rootstock that is resistant to diseases and environmental stresses. However, exactly how grafts are established has been unclear, and grafting is considered difficult between different family species.

The team focused on Nicotiana in the Solanaceae family, because a previous study had shown that its scion can be grafted onto the rootstock of Arabidopsis thaliana in the mustard family. The team conducted grafting experiments using plants of seven Nicotiana species and their partners from 84 species in 42 families. The results showed that Nicotiana, used as either scion or rootstock, succeeded in maintaining grafts for more than a month with 73 species in 38 families.

Next, the scientists examined the cellular mechanisms that enable Nicotiana to form grafts with plants from a wide range of families. They analyzed transcriptomes at graft junctions between Nicotiana and Arabidopsis and hypothesized that the expression of β-1,4 glucanases secreted into the extracellular region is involved in cell wall digestion. In further experiments, when β-1,4 glucanases were overexpressed in Arabidopsis, the adhesion property of the grafts was enhanced. Thus, they concluded that the expression of β-1,4 glucanases is a key in facilitating tissue adhesion of the grafts.

In addition, they conducted experiments to see whether Nicotiana can act as an intermediary in the grafting of different family species, by using a tomato scion and the rootstock of Florist’s daisy, a garden plant resistant to environmental stress. About three months later, the tomato plant successfully produced a small fruit.

“Using Nicotiana as an intermediate, we also achieved other grafts in which the scion, interscion, and rootstock all belonged to different plant families,” says Nagoya University bioscientist Michitaka Notaguchi, the corresponding author of this study.

“Our latest results regarding the key molecules involved, not just interfamily grafting itself, could help improve plant grafting techniques so that the variety of root systems available to aid crop production can be increased with minimal destruction of ecosystems.”

Nagoya University has a history of about 150 years, with its roots in a temporary medical school and hospital established in 1871, and was formally instituted as the last Imperial University of Japan in 1939. Although modest in size compared to the largest universities in Japan, Nagoya University has been pursuing excellence since its founding. Six of the 18 Japanese Nobel Prize-winners since 2000 did all or part of their Nobel Prize-winning work at Nagoya University: four in Physics – Toshihide Maskawa and Makoto Kobayashi in 2008, and Isamu Akasaki and Hiroshi Amano in 2014; and two in Chemistry – Ryoji Noyori in 2001 and Osamu Shimomura in 2008. In mathematics, Shigefumi Mori did his Fields Medal-winning work at the University. A number of other important discoveries have also been made at the University, including the Okazaki DNA Fragments by Reiji and Tsuneko Okazaki in the 1960s; and depletion forces by Sho Asakura and Fumio Oosawa in 1954.