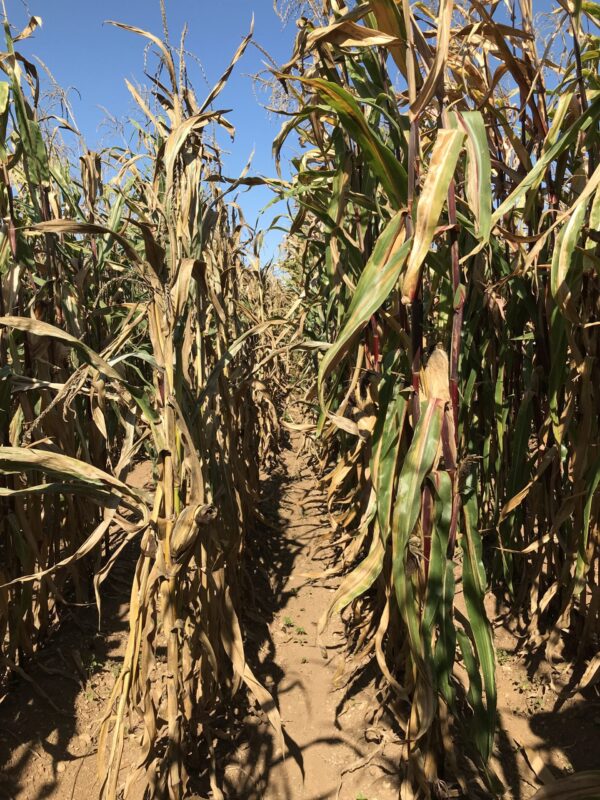 We all notice that it is getting warmer and drier from year to year. Climate change scenarios suggest that this tendency will continue this century and potentially increase in north-western (NW) Europe, during the crop-growing period. This will provide new opportunities for many pathogens and parasites that prefer warm temperatures and moderate moisture conditions. In this review article by Miedaner and Juroszek (2021), some fungal pathogens causing severe diseases and insect pests of maize are highlighted.

Maize as a thermophilic (heat-loving) crop with Mexican roots will be the winner of climate change as long as enough water is available. Consequently, global warming will expand maize cultivation into northern Europe as far north as southern Scotland and southern Sweden. However, the respective thermophilic insect pests and pathogens of maize will also benefit. For example, the leaf disease Northern Corn Leaf Blight caused by the fungus Setosphaeria turcica will likely thrive in the future in NW Europe (see title image above).

This blight pathogen is already prevalent in southern Germany, where it was introduced via southern Europe, from its subtropical and tropical South American origin several decades ago.

In addition, ear rots caused by Fusarium and Aspergillus fungal pathogens will likely thrive in a warmer climate. This is particularly worrisome because they can produce mycotoxins, which contaminate maize kernels and are, when eaten, potentially harmful to people and animals. Moreover, many different insect pest species will thrive in a warmer climate in NW Europe. The European corn borer (Ostrinia nubilalis), for example, starting at the Swiss-German border, reached northern Germany in 2015 and will continue to spread northward. Other stem and root borers will follow and likely increase crop health issues. Therefore, management of insect pests and diseases will be even more demanding than today. An Integrated Pest Management (IPM) approach that utilises different preventive and curative management methods should be applied.

One environmentally friendly and effective cornerstone of IPM is the cultivation of insect pest and disease resistant maize cultivars (hybrids). Future maize cultivars need to combine both multiple-disease and multiple-insect resistance, although the implementation of many different breeding goals will be challenging, particularly if trade-offs among them appear. For example: where possible, yield penalty due to resistance employment should be avoided because farmers do not normally accept low(er) yielding maize cultivars. Additionally, the breeding of insect-resistant maize cultivars has been neglected in the past decades in Europe. Thus, there is much work to do to protect NW European maize and modern genome editing procedures could assist traditional breeding approaches, making them faster and more effective. 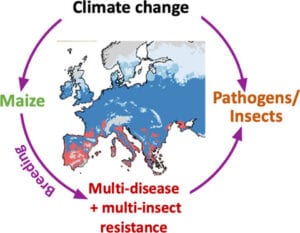 TITLE IMAGE: Maize plants in the field infected with Northern corn leaf blight; left is a susceptible genotype and right is a (quantitatively) resistant genotype. Credit: Dr.A.L.Galiano-Carneiro Boeven. All images used with permission of the authors.