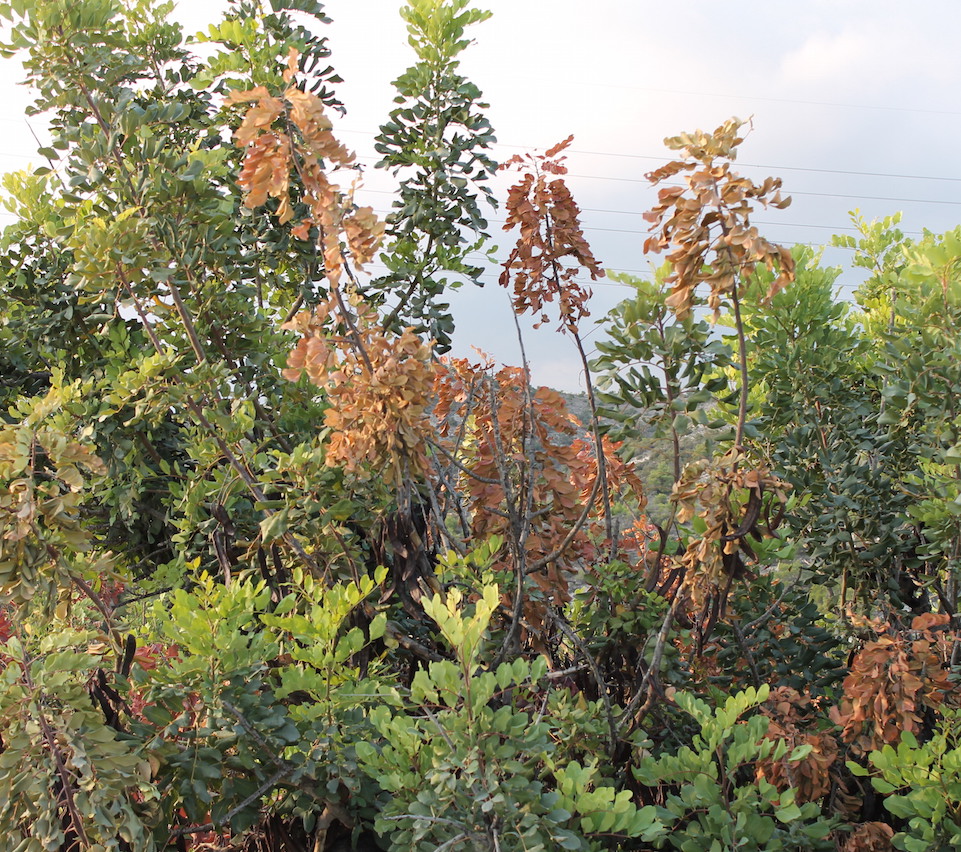 Holidays are here and it’s time to switch off. No scanning emails or checking your latest score on Research Gate or your h-index on Google Citations (which my son says is better). But there is a way to keep your mind alert, learn something new, and get some much needed exercise. So start scouring the hedgerows, meander in meadows, furrow in forests or simply look at the crops on the way to the beach. You’ll get lots of fresh air, have a pleasant walk and climb the occasional hill for that tree that doesn’t look quite right. Yes, you can go on holiday and still enjoy a little gentle plant pathology.

My introduction to plant pathology al fresco began with rusts. I was thrilled to discover Uromyces muscari on bluebells on my first foray: head down, eagerly looking for those pale yellow spots on leaves that hinted at pustules below. Your companions may not be so happy, as they wait for you to plod through another patch of bluebells, but think of it as a different way to enjoy nature.

Rusts are relatively easy to find, and a good way to start your outdoor pursuit of plant diseases. But not all plants have them, and there are plenty of other things to look for. Widen your horizons and savour the full gamut of sick plants on offer. First, a word of caution. All is not as it seems. You will encounter a world teeming with arthropods, some more interesting than others. The chewers and the borers are everywhere, and a little boring unless you can see something pretty like the Colorado beetle at work on potato. As seen in Montenegro but available in many other countries. Impressive! You’ll find an excellent fact sheet on the UK Plant Health Register.

Admire instead the diversity of leaf galls. I usually associate them with mites, though you could be lucky and see galls caused by a rust – or the spectacular sight of Gymnosporangium on juniper. The warmer and wetter the holiday destination the better. Not only will the variety of plants increase, but you should see more viruses and phytoplasmas, effortlessly moved around by insects on their own day trips. Look out for peach yellows in Spain and Italy and elsewhere in Europe. It’s a common disease that looks like a nutrient problem until you have closer look at the the leaves. Watch out for herbicide damage that can be confused with virus symptoms – all part of the fun of learning about plant health.

Pathogens also go on holiday, though once they reach their destination they tend to stay. Welcome, Hymenoscyphus fraxineus, after a long and doubtless tiring journey across the North Sea. We may have tired of ash dieback in the UK, but it could be intriguing for our US colleagues on holiday, taking advantage of the post-Brexit exchange rate. Apple proliferation phytoplasma is moving north in mainland Europe, so keep your eyes peeled if you are camping in Kent. Going to Puglia in southern Italy? Take the opportunity to see olive quick decline disease, though I’d keep quiet about being a plant pathologist. Farmers seem to think that we’re responsible for introducing Xylella fastidiosa.

Don’t be tempted to bring back souvenirs from your forays. It’s not a good career move to be remembered for introducing a new disease. Share photographs with colleagues, who will be eager to see your discoveries. Open an Instagram account, like Utah_pests or the Lab. of Clinic Plant Disease (sic) in Yogyakarta, Indonesia – though most of their photos seem to be of people eating.

Some years ago in Cyprus I saw lots of carob trees with abundant dead branches and dried up leaves. Classic wilt symptoms. My first thoughts were that this could be Verticillium, or maybe even another damn Phytophthora species, yet a closer look at the trees soon suggested something else. Large areas of bark had been stripped away. Something was eating the trees.

Deer and squirrel damage on trees is common in the UK. Squirrels are partial to sycamores, and the resulting symptoms look just like those on carob. But I wasn’t sure. Something exotic? Porcupines like young oil palms but are not renowned for climbing trees. I eventually found the answer when we visited a delightful agricultural museum near Polis. One of the displays showed a large, stone slab held at an angle with a short, sturdy stick. Place some food below and wait for something to grab it. Bye bye rat.

I don’t know how successful this trap was or whether it’s still used. Rats like chocolate, it would seem. The edible pods of the carob are dried and ground into a powder and used as a substitute for cocoa powder. Rats chew cocoa pods in the Solomon Islands and elsewhere, though that’s a long way to go on holiday. There’s plenty to see nearer home, so on with the flip-flops, knotted handkerchief and start looking.