Research in the Kamoun lab focuses on studies of plant pathogen interactions, particularly understanding how pathogens infect plants to cause disease. Plants rely on nucleotide-binding domain and leucine-rich repeat-containing (NLR) proteins to respond to invading pathogens and activate immune responses. Recognition of pathogen molecules, or effectors, by NLR proteins lead to a form of localised programmed cell death, which restricts pathogen growth. Recently, members of the Kamoun lab uncovered a new paradigm regarding the organisation of NLR proteins. In Solanaceae plants, NLRs form networks, with an expanded set of sensor NLRs, involved in detecting the pathogen effector, and a more conserved set of helper NLRs, known as NRCs (NLR-required for cell death; NRC2, NRC3 and NRC4) that mediate downstream immune signaling. Sensor NLRs can signal through more than one NRC to trigger an immune response. The resulting redundancy confers robustness to the network. We hypothesised that pathogens may carry effectors that target NRCs and, consequently, evade host detection. Such a phenomenon has been observed for the effectors AVRcap1b from the late blight pathogen (Phytophthora infestans) and SPRYSECd from the potato cyst nematode pathogen (Globodera sp.). Many NRC proteins are highly expressed in roots, which suggests that NRC helpers may play an important role in governing immunity against root infecting pathogens such as nematodes. The aim of my project is to screen additional effectors, known as SPRYSECs, from potato cyst nematode for their ability to suppress NRCs.

I transformed 19 candidate SPRYSEC effectors into Agrobacterium tumefaciens and co-infiltrated them in Nicotiana benthamiana with either Pto/AVRPto (known to activate cell death via NRC2/3) or Rpiblb2/AVRblb2 (known to activate cell death via NRC4). I assessed the cell death phenotype at 5 days post infiltration and identified an effector, SPRYSECl, which suppressed Pto/AVRPto-mediated cell death and two effectors, SPRYSECj and SPRYSECw, which were able to suppress Rpiblb2/AVRblb2-mediated cell death. Then I co-infiltrated them with autoactive NRC2, NRC3, or NRC4 variants. SPRYSECl, suppressed autoactive NRC2 and NRC3, but not NRC4, which suggests that it is either directly targeting both NRC2 and NRC3 or a downstream component common to both pathways. However, neither SPRYSECj nor SPRYSECw were able to suppress autoactive mutants of NRCs. This suggests that these two effectors are most likely targeting the sensor NLR, Rpiblb2. On completion of this project, I was able to identify a previously unknown NRC2/3 suppressor, referred to as SPRYSECl. Further work is now required to determine if SPRYSECl directly or indirectly associates with NRC2/3 and if its mode of action differs to that of SPRYSECd.

In parallel, I also worked with a PhD student to characterise functionally important regions of AVRcap1b, a known suppressor of NRC2/3-mediated cell death. This suppressor is present in all members of clade 1c that consists of a group of closely related Phytophthora species, including P. infestans, P. andina, P. ipomoeae and P mirabilis. We have found non-synonymous polymorphisms between the AVRcap1b from P. infestans and its ortholog from P. mirabilis and hypothesised that these non-synonymous polymorphisms underlie the ability to suppress NRC2/3. The rationale behind this is that the main host of P. mirabilis is Mirabilis jalapa, a species outside of the Solanaceous, for which an NRC network has not yet been described. My aim was to exploit these polymorphisms to identify regions in AVRcap1b important for suppression of NRC2/3. To do this, I cloned the putative ortholog of AVRcap1b from P. mirabilis. Cloning of this particular gene proved to be challenging at first, but with the guidance of the members of the Kamoun lab, I was able to develop a successful protocol for the cloning of the P. mirabilis ortholog and, later, other orthologs from P. andina and P. ipomoeae, as well.

This experience has been very positive for me: I have gained valuable technical skills (including western-blot, yeast two-hybrid, protein expression) that will help me in my future career as a plant pathologist and I have benefitted from a stimulating environment at TSL that has shaped the way I approach research questions. 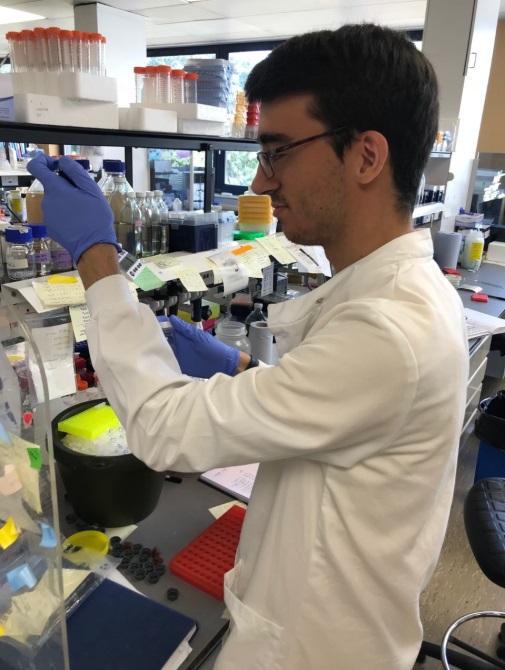