Upon infection of plant cells, pathogenic microorganisms deliver a cocktail of effector proteins into the host cytoplasm that function to disrupt the host defence response and manipulate the host to aid colonisation. Previously, a conserved amino acid motif found in oomycete effector proteins was used to identify candidate effectors of the oomycete pathogen Hyaloperonospora arabidopsidis (Hpa). The Denby lab studies how pathogens interfere with the transcriptional response and in this project my aim was to investigate interactions between Hpa effectors and host transcription factors (TFs). A Y2H screen conducted by Dr Dominguez Ferreras had previously identified multiple interactions between 16 Hpa effectors and 98 Arabidopsis TFs. I aimed to investigate whether these interactions also occur in planta and also whether constitutive expression of such effectors increased Arabidopsis susceptibility to biotrophic Hpa and the necrotrophic fungus Botrytis cinerea.

Identifying whether effector-TF interactions occurred in planta involved conducting multiple split yellow fluorescent protein (YFP) assays. Using gateway-cloning techniques I was able to generate binary plasmid vectors carrying Hpa effectors or Arabidopsis TFs with each linked to split YFP component parts (BiFC3 and BiFC2 respectively). Combinations of Agrobacterium tumefaciens carrying effectors and TFs that were predicted to interact were infiltrated into young leaves of Nicotiana benthamiana. It was predicted that interactions between effectors and TFs would occur in the nucleus and so under fluorescent illumination we expected to observe YFP fluorescent nuclei. In order to visualise nuclei we used an N. benthamiana line expressing histone H3 tagged with cyan fluorescent protein (CFP) that fluoresces at a wavelength different to YFP. Of the 32 combinations tested, 6 interactions were detected. One particularly strong interaction between effector HaRxL45 and a TCP Domain Protein was repeated multiple times (Figure 1). Interestingly, a second interaction, between HaRxL45 and a homeobox protein appeared to occur most often within the cell nucleolus. 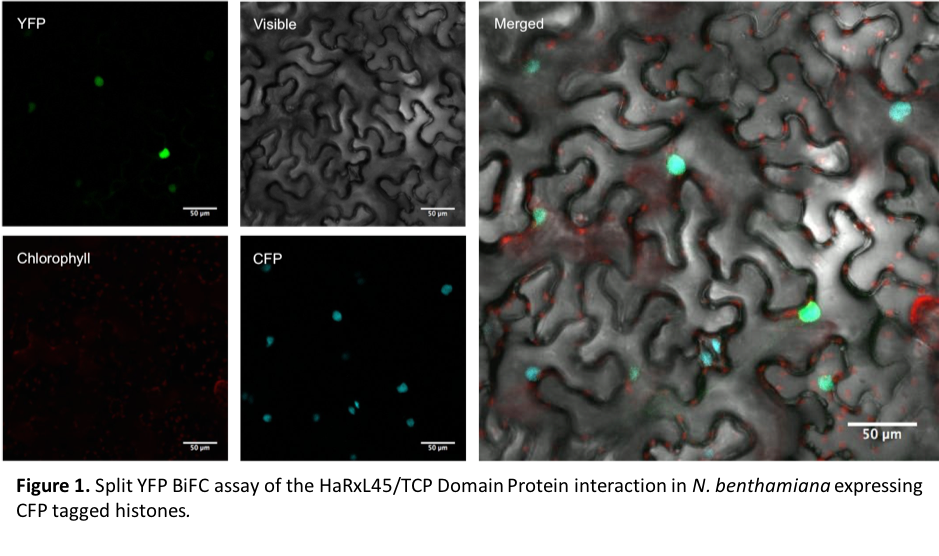 Constitutive expression of Hpa effectors in Arabidopsis seedlings (generated by Dr Laura Lewis) was predicted to increase susceptibility towards Hpa and Botrytis. Susceptibility to Botrytis was quantified by measuring the size of lesions at 24, 48 and 72 hours post leaf infection. The data collected suggest that expression of effector HaRxL2 significantly increases lesion size in transgenic Arabidopsis compared to Col-4 wild type.

Susceptibility to Hpa was established by measuring sporangiophore structures found on seedlings four days after a controlled Hpa infection. A transgenic line also expressing effector HaRxL2 did appear to host significantly more sporangiophores than wild type control. These results suggest overexpression of HaRxL2 leads to increased susceptibility of Arabidopsis leaves to both the biotrophic pathogen Hpa and necrotrophic Botrytis. However, lines expressing HaRxL45 did not seem to show an increase in susceptibility to either Hpa or Botrytis.

The next step in this work is to establish how the HaRxL2 effector has such a generic effect on susceptibility to different pathogens. Split YFP assays would help determine the cellular targets of HaRxL2 and its subcellular binding location. Identification of HaRxL2 targets could potentially elucidate key regulatory components of the immune response.

I would like to thank the BSPP for funding my 10 week project as well as everyone in the Denby Lab for their support. Also, a special thanks to Dr Sarah Harvey who helped me plan and complete my project as well as teaching me valuble laboratory skills that I hope to use again in my future career.

The University of York