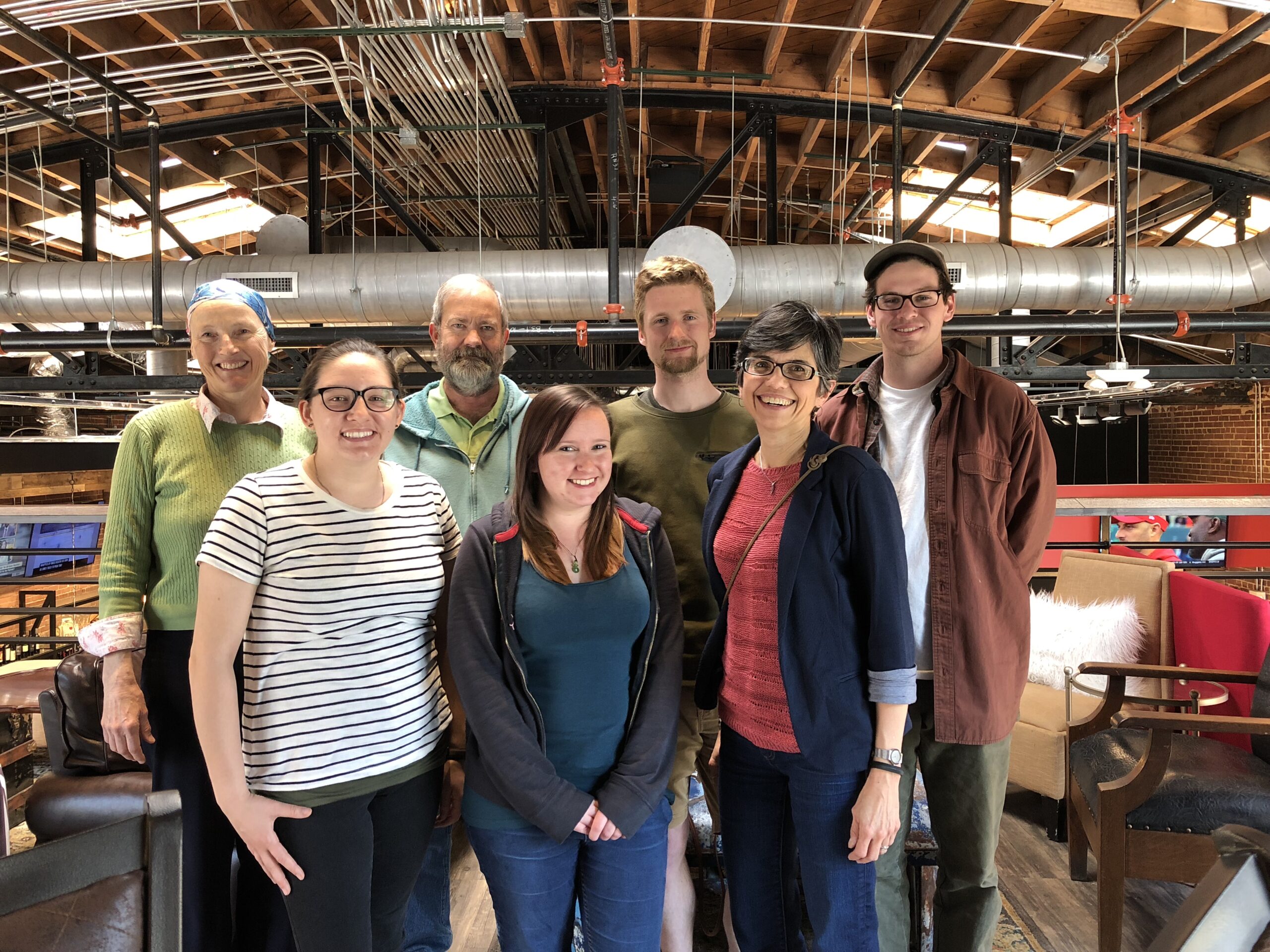 Written by Corinne Arnold at the John Innes Centre. This is the report from a BSPP Junior Fellowship. Click here to read more/apply for one yourself.

For the last three and a half years, I have been studying for my PhD with Professor James Brown at the John Innes Centre in Norwich looking at the evolution of fungicide resistance in the powdery mildew pathogen Blumeria graminis. During this time, we have established a collaboration with Professor Christina Cowger (USDA-ARS) and PhD student Emily Meyers at the North Carolina State University who are also studying fungicide resistance in Blumeria graminis.

As fungicides are one of the major lines of defence against crop pathogens, it is important to monitor the levels of fungicide resistance amongst major pathogens so that the most effective chemicals can be used and the development of resistance can be kept to a minimum. Currently, the major groups of fungicides used to control cereal powdery mildews are demethylation inhibitors (DMIs, of which the triazoles are the largest group), succinate dehydrogenase inhibitors (SDHIs), and morpholines. During my PhD I have studied all three of these groups, but our collaboration focuses on triazole-resistance in wheat powdery mildew Blumeria graminis f. sp. tritici (Bgt).

In Bgt and other pathogens, a single tyrosine to phenylalanine (Y136F in Bgt) mutation in 14α-demethylase encoded by the cyp51 gene conferring increased resistance to triazoles has been identified and reported on. This mutation is now very common in the UK Bgt population, but is not as common in the US. During the early stages of our collaboration, I obtained a range of Bgt isolates from across Norfolk, UK, and used fungicide spray assays to identify how resistant each isolate was to two commonly used triazole fungicides. I also sequenced a portion of the cyp51 gene where the Y136F mutation is located to identify which isolates contain the mutation. As all of these isolates showed a greater level of resistance to triazoles compared to an older, sensitive isolate, I expected them all to contain the Y136F mutation. Much to my surprise, I found that a number of isolates contained both Y and F at this location. As it has previously been recorded that cyp51 is a single-copy gene, and Blumeria graminis is a haploid organism, this seemed to be an error either in the sequencing process or with the purity of some isolates. After re-isolating one isolate and re-sequencing this portion of the gene, it was evident that there must be at least two copies of the gene as both Y and F were still present.

As our collaborators also obtained the same results from some of their US Bgt isolates, we decided to explore this further. From here on, isolates containing the Y allele will be referred to as Y isolates, those containing only the F allele will be referred to as F isolates, and those containing both the Y and F alleles will be referred to as heteroallelic isolates. As there was not a definitive correlation between the presence of the Y136F mutation and increased resistance, i.e. some F isolates showed more resistance than others, we decided to explore a few different avenues to explain what makes some isolates significantly more resistant than others. There were four specific areas that I wanted to experiment with: total gene expression of cyp51 in Y, F and heteroallelic isolates, allele-specific gene expression in these isolates, total cyp51 gene copy number in these isolates, and allele-specific copy number. With the help of a BSPP Junior Fellowship Award, I was able to travel to North Carolina State University and work with our collaborators for nine weeks and make a head start with these ambitious experiments.

Being an obligate biotroph, Blumeria graminis is notoriously difficult to work with. As Bgt cannot be cultured on media or agar plates, the first four weeks of this placement were spent “bulking up” the isolates I needed by transferring spores to increasing numbers of detached wheat leaves. In addition to this, I spent a lot of time testing primer combinations to find some that would be suitable for gene expression and copy number variation assays. For gene expression, ideally at least one of the primers needed to be located over an exon splice site so as to reduce amplification of any contaminating genomic DNA (even after DNase treatment). On top of this, the Y136F mutation is located in an AT-rich region of the gene which makes primer design particularly difficult and significantly limits options not only with designing primers, but also with designing probes.

I particularly wanted to look at allele-specific gene expression to see if either of the Y or F alleles were expressed more than the other in heteroallelic isolates. To do this, TaqMan probes must be designed which sit over the single nucleotide polymorphism, and they must also have a higher melting temperature than the primers that go with it. As mentioned this mutation sits in an AT-rich region which makes this probe design particularly difficult. In order to obtain probes (one for the Y allele and one for the F allele) with a high enough melting temperature suitable for TaqMan qPCR assays, the probes needed to be 29bp in length which is pushing the limit for these assays. As suspected, with only one nucleotide mismatch to work with, there was not enough discrimination between the two probes to accurately quantify the difference in gene expression. When used separately, the probes would bind to the gene regardless of which allele was present therefore they needed to be used together in a multiplexed assay in order to be in competition with each other and increase the specificity. Unfortunately, the specificity was still not high enough to be able to obtain accurate allele-specific gene expression quantifications, but there are more options available. By incorporating locked nucleic acids into the probes, specificity can be increased and the probes can be made shorter as these special nucleic acids increase the melting temperature. This will be the next experiment for us to try as we continue this research.

After obtaining the gene expression results, estimating cyp51 copy number became much more important than before. There is certainly more than one copy of this gene, but without this estimation, it is difficult to attribute increased expression to upregulation due to promoter region mutations or to increased copy number or both. For allele-specific copy number estimation, the same probes were used as for the allele-specific gene expression, and so the same problems arose therefore usable results were not obtained from this. A total copy number assay was designed and estimations were possible, however there were too many ambiguous estimations for this to be accurate. For example, one Y isolate where the cyp51 gene has been completely sequenced is estimated to have 0.4 copies of this gene. This is clearly inaccurate, therefore I am currently developing an improved method using DNA digestion and digital PCR which should help with the accuracy of this assay.

Given the short amount of time allocated to this Junior Fellowship Award, it was an excellent opportunity for me to really focus on this aspect of my PhD project and make significant progress with the experiments. These experiments are not completely finished, but this award allowed me to explore more complicated aspects (i.e. the allele-specific expression and copy number) as well as boosting progress with establishing protocols for gene expression and copy number that were slow in coming before the award. It was also a fantastic opportunity to work in person with our collaborators which really helped with working through ideas and experimental designs as this is difficult to do through email. I would like to thank the BSPP for awarding me with this opportunity as it has greatly pushed this part of my PhD forwards and we now have a much better understanding of how alterations in this gene lead to increased resistance to triazoles. I would also like to thank Prof. Christina Cowger, Emily Meyers and their group for being so welcoming and giving me a great introduction to the culture and lifestyle in the USA.