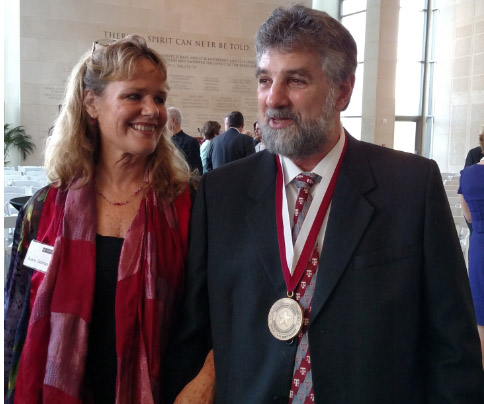 With great sadness, BSPP reports that Martin (Marty) B. Dickman, the former Editor-in-Chief of Molecular Plant Pathology (2012-17) died on December 2nd, 2018 in Carpinteria, California following illness. Marty was born in Flushing, New York. He received his B.S. degree at the University of Hawaii in Hilo, in 1979, and his MS and PhD degrees at the University of Hawaii at Manoa in 1982 and 1986. After a postdoctoral fellowship at Washington State University, he joined the University of Nebraska as an Assistant Professor in 1987. In 2003, he was named the Charles Bessey Professor in Plant Pathology. In 2006, he joined Texas A&M University (TAMU) as Professor of Plant Pathology & Microbiology. At TAMU, he held the title of Christine Richardson Professor of Agriculture, and was the Director of the Institute for Plant Genomics and Biotechnology until 2017. He retired and moved to California in the summer of 2018.

Dr. Dickman was widely regarded for his pioneering work on the genetics and molecular biology of fungi and fungal-plant interactions. He made numerous advances in our understanding of how necrotrophic fungi through the activity of their metabolites, colonize plants and how plants, upon recognition of the pathogen trigger a response known as apoptosis, a form of programmed cell death. He gained national and international recognition for his research contributions and authored numerous refereed articles, published in the most highly respected scientific journals and received numerous academic awards. He mentored dozens of students and post docs during his career, a number of whom are now prominent scientists in their own right.

Dr. Dickman had a larger than life personality; he was gregarious, outgoing, yet caring and nurturing. He was a wonderful colleague with many friends in the scientific community. He was widely respected and was never shy to voice an opinion. The man had passion. He will be greatly missed by all that knew him.  Moreover, he left a large and lasting footprint in our scientific community. Our thoughts are with his family.