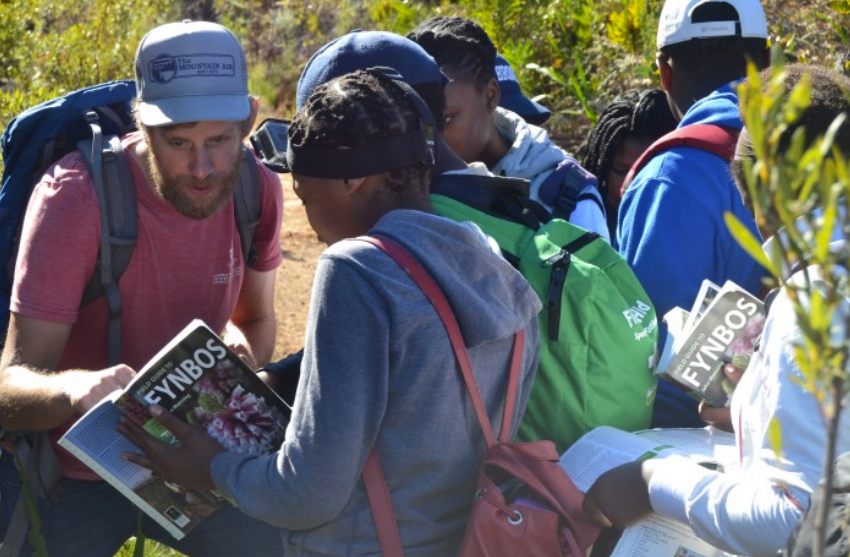 Cape Citizen Science (http:// citsci.co.za/) is an initiative in South Africa that received support from the BSPP Plant Pathology Promotion Fund in 2017. The financial support helped engage youth in research about plant diseases in the indigenous flora of the Cape Floristic Region, a biodiversity hotspot in the extreme southwest of Africa.

More than 200 youth participated in the program as ‘pathogen hunters’ during Saturdays throughout the year in 2017. Many of the youth engaged were from impoverished communities surrounding Cape Town. The support provided by the BSPP enabled the project leader, Joey Hulbert, to establish partnerships with several after-school learning programs and cover the costs to transport their youth to nature reserves and provide nourishment.

Each Saturday activity started with a presentation about microbes as the cause of disease, the importance of biodiversity, and the threats from exotic plant pathogens. Afterward, learners were led on a hike into nature where they looked for sick plants, collected samples together, identified biodiversity, and learned about ecology. Learners were then invited to make their own isolations from the sick plant material, writing their name on the petri-plate and contributing the sample to Cape Citizen Science. The organisers also took duplicate petri-plates back to classrooms so the learners could watch what grows. The activities always ended with a South African ‘braai’ (bbq), ensuring time for additional informal engagement.

The research conducted by the pilot project of Cape Citizen Science has focused on revealing the diversity and distributions of Phytophthora species within the Cape Floristic Region. Each activity with youth was organised at a different nature reserve or national park to maximize discovery. These activities were first opportunity to visit these areas for many of the learners.

Cape Citizen Science also receives support from the DST-NRF Centre of Excellence in Tree Health Biotechnology, the Forestry and Agricultural Biotechnology Institute, University of Pretoria, and Stellenbosch University. The project has also benefitted from financial support provided by the American Phytopathological Society and backers of two crowdfunding campaigns (DOIs: 10.18258/2066 & 10.18258/8690).