Box blight, a disease caused by the fungus Cylindrocladium buxicola affecting Buxus spp, is a common problem in UK gardens, as demonstrated by the fact that it is one of the most common enquiries sent in to the RHS by its members. The aim of RHS research on box blight is to gather information about the disease that will help to guide gardeners to the best strategies to control the disease. This summer I have been fortunate enough to have the opportunity to carry out a project at RHS Wisley investigating box blight and interactions with the box tree caterpillar (Cydalima perspectalis).

In the initial stages of my project I focused on developing reliable methods of inoculation of potted box plants, cuttings, and hedges, and methods of getting the resulting stem and leaf lesions to develop spores. More emphasis was placed on stem lesions as less is known about these, and they had previously been observed to sporulate less reliably than leaf lesions. These methods were used in the rest of my project and could be used for future experimental work on box blight.

I produced many inoculated leaves and caused them all to produce a crop of spores. I then kept these leaves in different conditions (humid and dry) and periodically tested the spores to see if they were still viable and able to germinate. I also repeatedly washed the spores off some leaves and left them to produce a new crop of spores until they were no longer able to produce spores. In damp conditions, the average percentage of spores able to germinate remained high throughout the duration of the experiment, but in dry conditions it gradually declined to 14.75% after 31 days. Smaller leaves stopped producing spores after being washed 8 or 9 times. These results provide an indication of the timescales over which the leaves that fall from infected box plants remain a threat to uninfected plants nearby.

I also looked at how well application of fungicide worked against stem lesions as a preventative measure and as a curative measure. When used as a preventative measure, fungicide was completely effective at preventing the formation of stem lesions (although plants did develop a few leaf lesions). It also seems as though fungicide used as a curative treatment was fully effective at killing the fungus within stem lesions, as none of the stem lesions from plants treated with fungicide post-inoculation produced spores when using methods that had previously been leading to 80-100% of lesions producing spores, however stem lesions from untreated plants also did not produce spores as reliably as lesions of the same age had previously been found to sporulate in the same conditions. This suggests that another factor on top of the fungicide application, such as the atypically warm weather this summer, may also have contributed to the death of the fungus within the stem lesions.

The final part of the project looked at potential interaction effects between box blight and the use of control measures for the box tree caterpillar. While I was at Wisley, an experiment was running in which nematode worms were being trialled as a biological control measure. Some of the plants in this experiment were covered by horticultural fleece to keep the conditions around them humid as nematode worms favour humid conditions. Humid conditions also allow more reliable infection by and sporulation of the fungus. I was responsible for surveying the plants regularly to see whether the nematode treatment and horticultural fleece would lead to accelerated development of box blight symptoms.

I would like to thank Matthew Cromey for supervising me, Stephanie Bird for trusting me not to squash any caterpillars while inspecting her box plants, and the whole of the Plant Health team for the guidance, biscuits, and company. I am also very grateful to the BSPP for their funding. 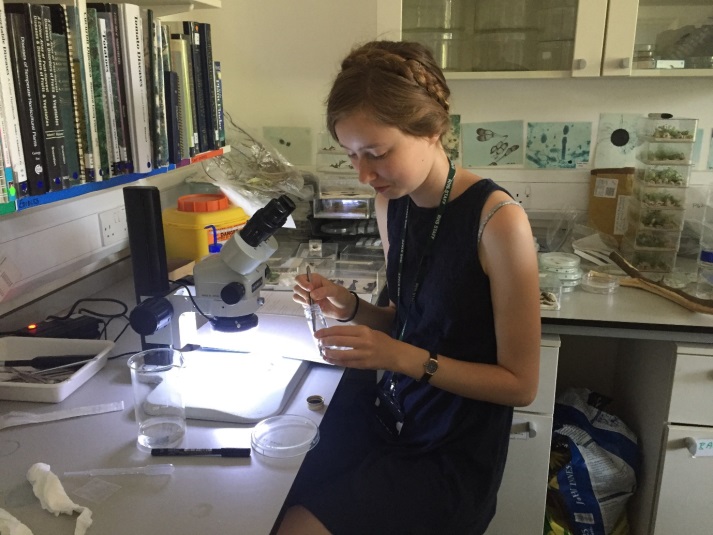