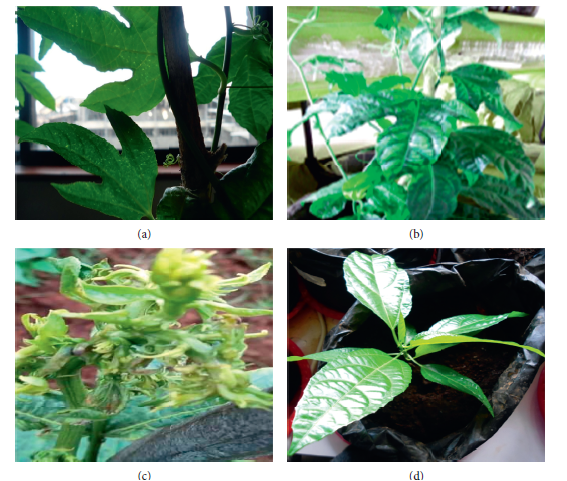 My journey while undertaking the plant pathology study was interesting and quite insightful. I undertook a project which aimed at determining the effects of interactions between two woodiness disease causing pathogens in Kenya. This work enabled me to interact with the farmers and understand the issues hindering production. In addition, I was able to interact with other scientist in my field whom we had a common interest of improving livelihood and food security through crop protection.

Passion fruits is a high income generating horticultural crop in Kenya, which is grown to generate a source of livelihood by the small scale farmers. However, this fruit production has been hampered by viruses causing woodiness disease. This disease makes the fruit inedible because it hardens the outer covering (pericarp), in the field woodiness disease is characterised by distortion of the leaves, clearing of the veins, and yellowing of the plant accompanied by “woodiness” of the fruit. Approximately 90 % loss of total production is attributed to this disease. In East Africa, woodiness disease is caused by three viruses known as passion fruit woodiness virus, cowpea aphid borne mosaic virus, and Uganda passiflora virus. Effects of mixed infection of these viruses had never been documented.

One or two virus can infect the same plant at a particular time to cause infection. In some cases, these viruses may combine to form a new virus, which is more severe. For example, Maize lethal necrotic disease is a combination of Maize Chlorotic Mottle Virus and Wheat Streak Mosaic viruses, which results to 90% crop loss. In 2012, maize worth about $52 million were lost during this disease outbreak in Kenya. Just like in the case of maize, the type of viruses causing woodiness disease in passion fruits may have combined to form a more harmful virus, which is currently causing decline in production.

Currently, woodiness disease is widespread in all passion fruit growing areas countrywide. However, in some fields the disease appearance differs in regards to disease severity and visible symptoms from the commonly known type of virus. For this reason, this research was conducted to ascertain whether a new virus or virus strain causing woodiness disease has developed. In addition, the effects of interaction between the two isolates was investigated. In addition, transmission mechanism of the newly isolated virus was ascertained. The commonly known virus type was labelled isolate 1 while the unknown one was labelled isolate 2.

The study involved infecting healthy plants with virus isolate 1, virus isolate 2 and a mixture of the two viruses. This was done in order to compare symptoms produced by singly infected plants and that infected by the combined viruses. Also, a test was conducted to investigate the identity of virus isolate one and virus isolate two. The results of the study showed that both isolates were strains of cowpea aphid borne mosaic virus. The combined virus isolates produced more severe symptoms in the plants as compared to the singly infected plants as shown in Figure 1 below. Furthermore, it was discovered that the yellow variety passion fruit was more resistant to woodiness than the purple variety. This implies that the yellow variety can be grafted to the purple variety to improve passion fruit resistance to woodiness disease.

New symptoms and increased rapid plant death was seen in the plants doubly infected with the two virus isolate. This implied that the combination of the two viruses produced a more evolved virus which was powerful than the plant immune system. The study also revealed that woodiness disease in Kenya is only caused by two strains, which are passion fruit woodiness virus and cowpea aphid borne mosaic virus and that the deadly Uganda passiflora virus in a neighbouring country Uganda was absent.

The findings of this study show that disease severity dramatically increased due to infection with two CABMV isolates pointing to virus isolate synergy. In addition, the distribution of the virus isolates in the plant varied, CABMV isolate 1 within the plant showed some differences with the other treatments, and this has an implication in detection and sampling. In this case, the plants with leaves testing negative for potyvirus had the stem and roots testing positive. Conventionally, the leaves have been the gold standard for virus detection. However, these results show that the absence of virus in the leaves does not necessarily mean that the plant is virus free. Therefore, a negative leaf test should not be interpreted as a definite diagnosis of this virus isolate. This information helps in the selection of plant parts with high viral load for sampling.

The information from the research provides a framework for understanding the epidemic of woodiness disease which is currently ongoing in all passion fruit growing areas globally. The disease rapid spread can be attributed to readily available inoculum in all plant parts and increased virus concentration in the plant due to synergistic interaction. This information on the distribution of CABMV in different tissues aids in providing sensitive diagnosis during the early phase of disease development. Therefore, this study outcome is important in the management of passion fruit woodiness disease.

Am very grateful and would like to thank BSSP for facilitating my studies. I believe this was the beginning of an interesting research journey that will allow me to contribute to the ending food insecurity through crop protection in future.