By the middle of the century climate change and a rapidly rising world population will put unprecedented strain on crop production. Harvest of key crops such as wheat is expected to fall by 6% for every 1 oC increase in temperature whereas food production will need to increase by 70% to feed a population of over 10 billion by 2050. Biological control agents have the potential to significantly increase crop productivity by reducing losses due to plant diseases. However, greater understanding of their mechanisms and effectiveness is necessary before they can be more widely used.

A previous PhD student at Newcastle University showed that the biological control agent Trichoderma harzianum T-22 can reduce the severity of spot blotch disease of barley caused by Bipolaris sorokiniana. Two BSPP-funded students have found that T. harzianum T-22 spores inhibit the growth of B. sorokiniana by production of a biologically active substance or substances. The focus of my project was to investigate the properties of the active material and if possible isolate and identify it.

Trianum-P, a commercially available product containing T. harzianum T-22 spores, was initially used to inoculate potato dextrose agar plates. These plates were incubated for 4 days before spores were collected and suspended in water. The spore suspensions were left for 72 hours to exude metabolites, then spores were removed by centrifugation and filtration. B. sorokiniana spores were suspended in the T. harzianum metabolite solution produced, 1 ml of the suspension was transferred onto a microscope slide covered with 1% agar, and spore germination was monitored over 4 hours using a light microscope. There was a 98% reduction in spores germinated compared to the control. A Chi-squared test indicated that the difference was significant. Dilution of the metabolite solution showed a sigmoidal relationship between concentration and germination inhibition, with 50% inhibition by extract from approximately 1.3×105 spores/ml. 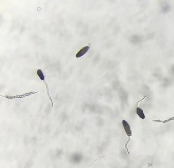 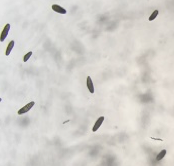 The longevity of active metabolite secretion by T. harzianum may be an important factor in its effectiveness as a biological control agent. To investigate this, spores were separated from the metabolite-containing solution after 72 hours then resuspended and incubated in water for a further 72 hours. The extent of B. sorokiniana inhibition by the metabolite solution produced during the first and second period was then compared. During the first 72 hours the spores produced metabolites that inhibited B. sorokiniana germination by 90% compared to the control. The solution produced in the second 72 hours still significantly inhibited germination but germination of B. sorokiniana was only reduced by 57%. Regardless of spore concentration a 24 hour incubation did not produce a germination inhibiting solution; this could be due to a delay before spores secrete metabolites once suspended. Secretion is therefore at its greatest between 24 and 72 hours and decreases thereafter.

Characterisation of the biologically active material is important to understanding its mode of action. The metabolite-containing solution was heated at 100 oC for 20 min. The heated solution did not inhibit B. sorokiniana spore germination, showing that the active material is not heat stable. This suggests that it could be a protein, perhaps an enzyme, rather than a small molecule as previously thought.

Previous work indicated that the active metabolite could be extracted with ethyl acetate. However, in my experiments the small amount of residue extracted did not inhibit germination. Other organic solvents with a range of polarities, including chloroform with a polarity index of 4.1 and hexane with 0.1, also did not extract active material. The active material therefore has a strong affinity for water; this means it is likely to have a high proportion of polar groups.

Using a freeze-dryer metabolites of T. harzianum were removed from solution. Analysis of the metabolites by liquid chromatography-mass spectrometry revealed a complex mixture. Bioassay of the components will be required to isolate the active ingredient. Once isolated, further analysis should tell us the true nature of the metabolite so its potential for disease control can be optimised.

I would like to thank the BSPP for their support. The vacation scholarship has given me the opportunity to develop practical skills ordinarily unfamiliar to a biologist of my level including performing liquid extractions. More importantly I have greatly improved my planning and time management skills allowing me to be more productive whilst working independently in the lab. These skills will prove invaluable for future endeavours in and out of the lab.