Following my second year at Exeter University, I was given the opportunity to work in the laboratory of Professor Ian Toth under the supervision of Dr Sonia Humphris at the James Hutton Institute (JHI) in Scotland. Their research is focused on diseases caused by enterobacterial plant pathogens, with an emphasis on the potato pathogens Pectobacterium and Dickeya species, which both cause blackleg of potato plants and soft rot of tubers. Potato is a leading food crop globally, and blackleg of potato, which is characterised by stunted growth and rotting stem tissue of infected plants, is of huge economic importance. In Great Britain, blackleg of potatoes is primarily caused by Pectobacterium atrosepticum (Pba), with Pba causing 95% of blackleg in Scotland.

Although blackleg is thought to originate from contaminated mother tubers, previous research by Ian Toth et al. at the JHI has shown that blackleg infection, particularly of high grade seed, often originates from environmental Pba, with irrigation heavily implicated in the spread of bacteria and roots being the most commonly contaminated plant part. However, research so far has been unable to show the systemic movement of Pba from potato roots through the xylem into the stem. Free living nematodes (FLN) in the soil are environmentally abundant, and previous research has implicated nematodes in the dispersal of Pectobacterium by showing that certain species can persist in their guts. The aim of this project was to identify whether FLN in the soil are facilitating the movement of environmental Pba into the roots of potato plants and providing Pba with access into the aerial parts of potato plants.

To investigate this, Solanum tuberosum cv. Estima were inoculated with Pba 1039 tagged with Green Fluorescent Protein (GFP), and a community population of nematodes were introduced to their soil by pouring the suspension into 3 holes made around the plant base. A 38µm mesh was placed at the bottom of the pots to prevent the nematodes from escaping the soil. At 4 weeks post-inoculation, the plants were harvested and separated into roots and stems. Plant parts were cleaned with ethanol and bleach to ensure that only internalised bacteria remained and then plants were homogenized. Imprints of the plants on LB + ampicillin plates were taken before and after cleaning to check the cleaning process was effective. Serial dilutions were made and plated on crystal violet pectate (CVP) agar (a semi-selective media for Pba) in duplicate. Plates were then viewed under a blue light.

During my time at the JHI, I was also involved in a project validating specific diagnostic primers for Pectobacterium and Dickeya species. Through this I gained valuable technical skills in PCR and gel electrophoresis.

I would like to take this opportunity to thank the BSPP for their funding, which has allowed me to gain insight into the complex world of research and has cultivated my practical skills in the laboratory. Many thanks to Professor Ian Toth and Dr Sonia Humphris for providing me with insight into their research, and also to Dr Emma Campbell and Lauren Watts for their continued guidance and support in the lab. Undoubtedly, this experience has prepared me for the research project I will commence in my final year at university, as well as potential research during postgraduate studies.

The University of Exeter

Potato plants inoculated with Pba and nematodes before sampling 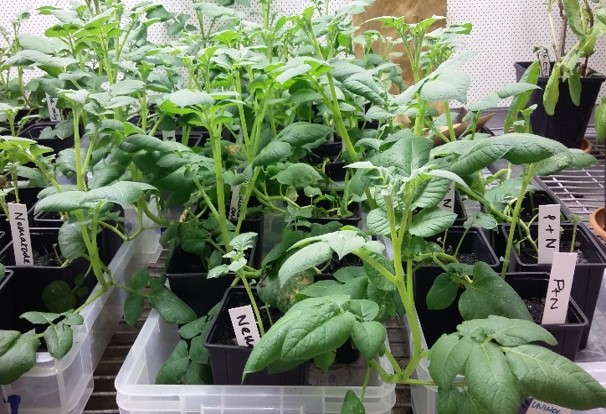