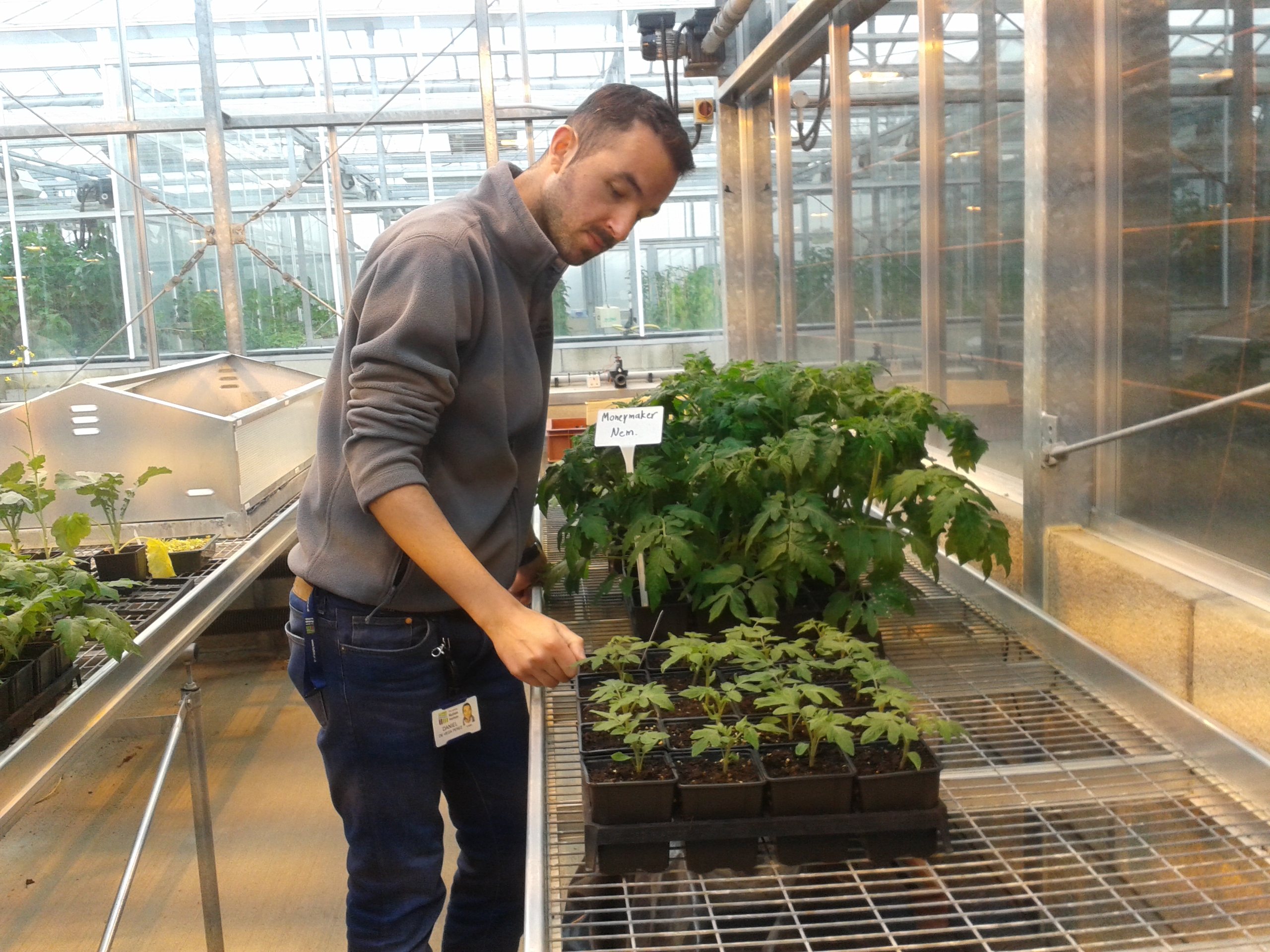 Written by Daniel De Vega Perez. This is the report from a BSPP Junior Fellowship. Click here to read more/apply for one yourself.

Professor Murray Grant’s lab strategy is to use a variety of post-genomic tools to dissect the signaling networks involved and have a strong interest in integrating transcriptomic and metabolomics data to understand the nature of the host metabolome and how it is modified during establishment of plant disease.

In his department they are particularly interested in how both the plant and pathogen utilise plant hormone signaling pathways in defence and disease. During my BSPP-funded junior fellowship I performed an HPLC/MS analysis where I looked at the accumulation of the 3 main hormones involved in defence, salicylic acid (SA), jasmonic acid (JA) and abscisic acid (ABA). These three plant hormones are involved in systemic resistance against biotrophic and necrotrophic fungal pathogens, such as Botrytis cinerea, the aggressive pathogen causative agent of gray mold disease in tomato. These key hormones can be induced in crops such as tomato as endogenous defence mechanisms against pathogen attack.

Induction of plant defence can be achieved through the use of non-specific inducing agents, called resistance elicitors (RE), which can mimic pathogen-induced defence mechanisms in the plant, resulting in a broad-spectrum robust and more rapid resistance (Induced resistance). The main aim of my PhD project is to investigate the mode of action of RE in crop defence against B. cinerea to potentially be included in crop protection strategies. For this reason, we conducted a big experiment where we looked at SA/JA/ABA expression in tomato plants infected with B. cinerea under four different conditions. We treated-primed 4-5 weeks-old tomato plants with two different resistance elicitors (Methyl-jasmonate (MeJA), the plant hormone derivative and chitosan, the natural polysaccharide and chitin derivative) and a combination of both RE in order to look for potential synergies; last we included non-treated tomatoes as control treatment. 5 days later, chitosan and MeJA-primed plants were challenged with B. cinerea and leaf tissue was harvested at three different time points during symptomless stage of the infection (6, 9 and 24 hpi), for hormone analysis through HPLC/MS.

Chitosan and MeJA alone and in combination were able to induce resistance and protect tomato against Botrytis, being able to significantly reduce necrotic lesion expansion at 48, 72 and 96 hours post infection (hpi) (see figure). Interestingly, we saw that the combination treatment highly protected tomato plants and they looked healthier and stronger and the levels of hormones were not higher in the combination treated tomatoes in comparison with the single-treated plants. These results suggests that low doses of resistance elicitors can be used in combination with other crop protectants which can potentially lead into synergistic effects and a more efficient and less stressful plant defence.

With regard of the effect of chitosan and MeJA treatments in hormone induction, MeJA was able to prime JA earlier and stronger during B. cinerea infection in comparison with non-treated control plants. Interestingly, chitosan was also able to induce JA and the bioactive compound jasmonic acid-isoleucine (JA-Ile) in a time-dependent manner, later than MeJA, during the infection, whilst the combination treatment primed JA faster and quicker than chitosan itself. This suggests a different strategy of chitosan in protecting tomato plants vs. B. cinerea during early stages of the infection (in progress research to be revealed by my transcriptomic analysis in chitosan-primed and B. cinerea infected tomato plants). More interestingly, MeJA was able to synergistically trigger the 3 key hormones ABA, SA and JA at 9 hours after the infection. Apparently, there wasn’t any salicylic acid manipulation from the pathogen during the infection and ABA was much more concentrated than the other hormones; however ABA doesn’t seem to play a big role during the early stages of the infection, apart from its putative pathogen-caused reduction at 6 hpi.

Hence, HPLC/MS hormone analysis revealed jasmonic acid and its bioactive derivative JA-Ile as the key hormones involved in chitosan and MeJA tomato resistance to B. cinerea during early stages (symptomless) of the infection (at 6, 9 and 24 hpi). These results correlate with the well-known role of JA into plant resistance against necrotrophic pathogens such as B. cinerea, Sclerotinia sclerotium and Fusarium oxysporum.

These studies can be of a high interest for Prof. Murray´s lab research in order to further understand the complex role of metabolomics, more specifically hormones, in plant protection against aggressive pathogens and the role of elicitors in hormone cross-talk, which is an important part of my thesis research. Finally, these results may have a big impact in crop protection strategies as they demonstrate how low doses of natural compounds such as chitosan and the plant hormone methyl-jasmonate can have synergistic effects in plant defence against aggressive necrotrophic pathogens like B. cinerea. Clearly, chitosan can be a powerful tool to use in crop protection strategies but further experiments need to be done to specifically address the role of priming, an alert state of the plant defences that allows it to faster and more robustly fight against pathogens with minimal cost to plant development, to understand the complex chitosan-plant interaction framework. 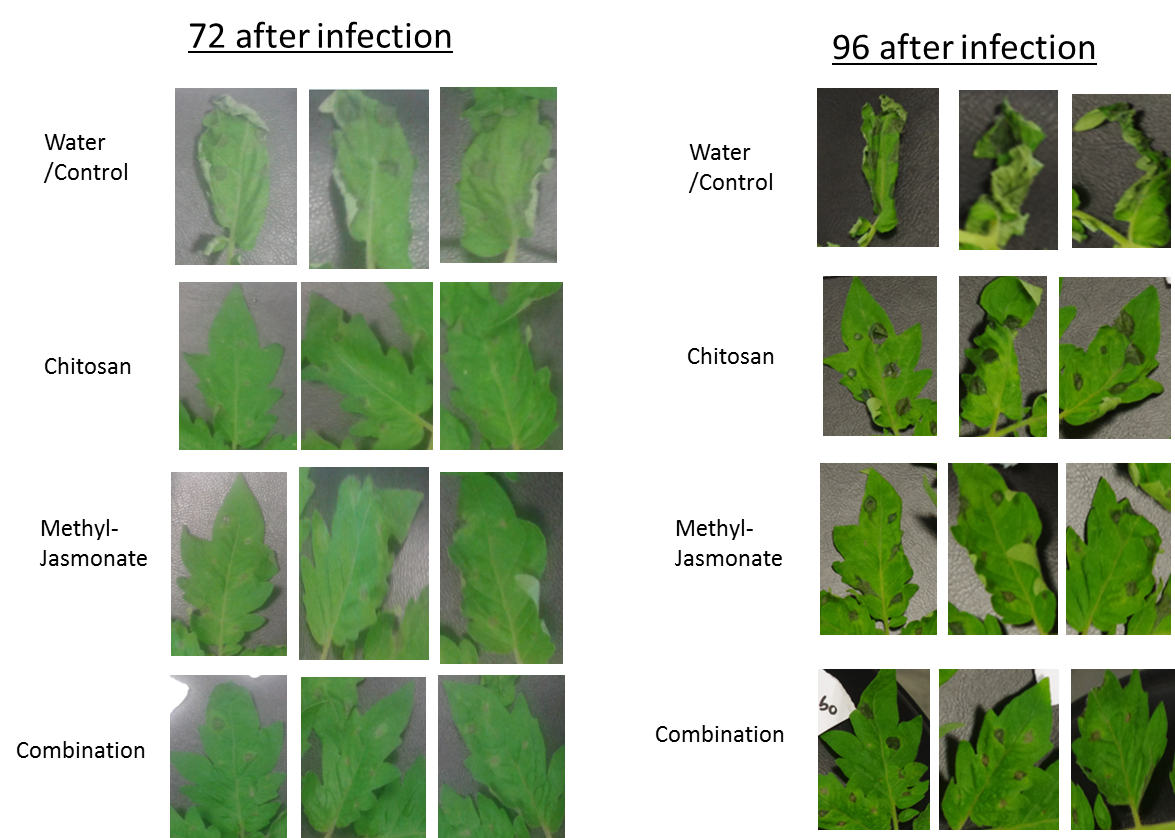 Figure 1. Tomato plants treated /primed with Chitosan, Methyl-jasmonate and both elicitors combined and water as a non-primed control. Five days after treatment, plants were challenged with Botrytis cinerea spores. Primed tomatoes showed a stronger protection 3 and 4 days after infection. 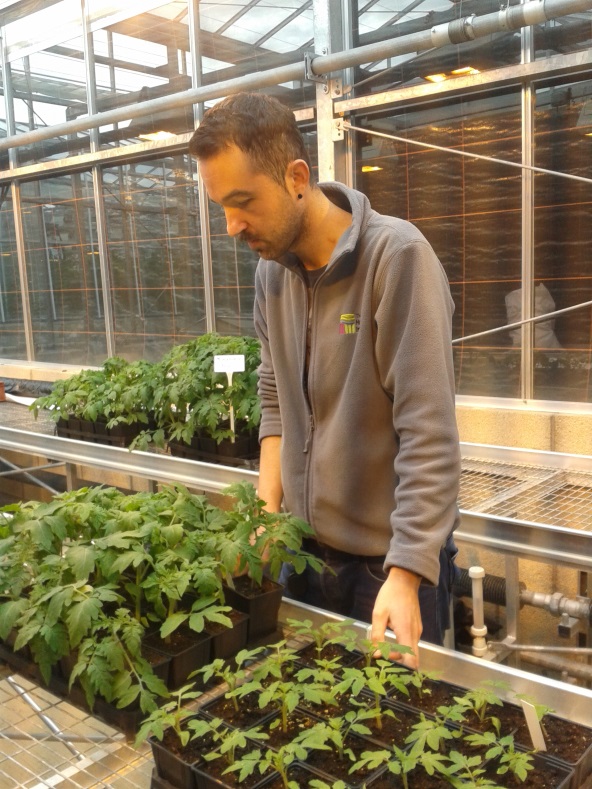 Figure 2. Daniel in the glasshouse taking care of the tomato cv. Moneymaker for the LC/MS experiment