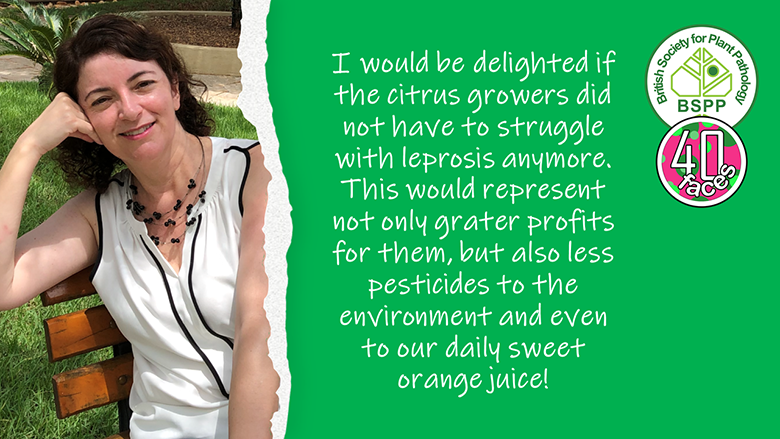 Since I got my PhD, in 2001, I’ve been working primarily with citrus viruses, in particular with those involved in the citrus leprosis (CL) syndrome. CL is considered the most important viral disease of citrus in Brazil (the main sweet orange producer in the world) and occurs in other citrus-producing countries in Latin America, and in South Africa. It is transmitted by Brevipalpus mite vectors and is primarily controlled using pesticides. Over the last 20 years, we were able to develop diagnostic tools, sequence and characterize at least four virus species associated with CL and classify them into two new genera. We have spent the last years studying their biological and molecular interactions with natural and experimental host plants and mite vectors, with the objective to understand the pathosystem and, ultimately, contribute with the disease management in the field.

I am from Brazil and graduated in Agronomy in 1993 at the University of São Paulo (Esalq/USP), where I also got my master’s degree in plant pathology/ virology, under the guidance of Dr. Jorge Rezende, in 1996, working on orchid viruses. The following year, I moved to Gainesville, FL, USA, to pursue a PhD under the guidance of Drs. Ernest Hiebert and Jane Polston, and I worked with tomato begomoviruses. In 2001 I returned to Brazil and worked as a post-doctorate fellow in Dr. Elliot KitajimaÂ´s lab for a few months, until I started working at the Brazilian Agricultural Research Corporation (Embrapa) in 2002.

That’s a tough question, with so many important diseases out there! But I would be delighted if the citrus growers did not have to struggle with leprosis anymore. This would represent not only greater profits for them, but also less pesticides to the environment and even to our daily sweet orange juice!

Throughout my formal education, I interacted with many female fellow students, but very few female professors and even fewer female administrators. In the last 20 years, since I finished my PhD, I see a clear movement towards gender equity and I now interact with many more females in those positions, which makes me happy and hopeful for the future. However, as a researcher who teaches courses to graduate students, I don’t see the same happening with minorities and people with disabilities over time. Therefore, I would certainly like to address this issue and encourage students from different backgrounds and facing different disabilities to get acquainted and pursue their studies in plant pathology. But if I have to pick one particular issue, it would be making people with disability feel welcome in the field!

I would be an entomologist or acarologist. I loved those areas during college, and I work with the interface between entomology/acarology and plant pathology, since one of my research focuses is viral transmission by vectors. Most certainly, if I were an entomologist, I would work with arthropods as pathogen vectors anyway.