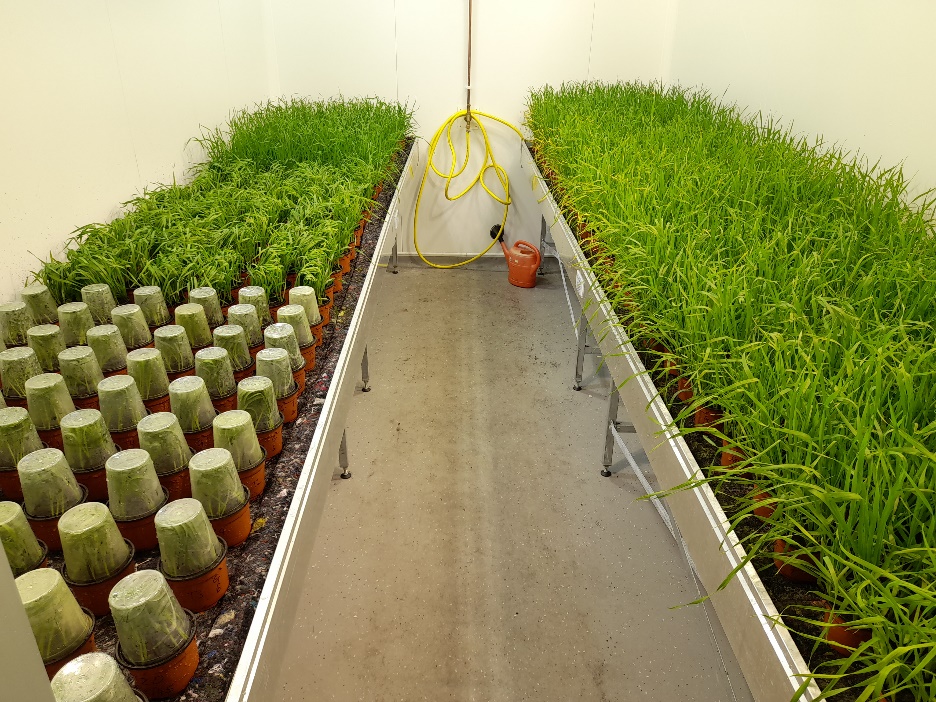 Mapping the genome of the wheat pathogen Zymoseptoria tritici

Zymoseptoria tritici (Zt, anamorph Septoria tritici) is the causative agent of Septoria tritici blotch (STB), which is one of the most economically damaging wheat diseases in the UK. Annually, it causes between 20 and 50% yield losses of susceptible cultivars of wheat. The spread of Septoria is mainly controlled using fungicides and resistant cultivars of wheat. The aim of my 10-week BSPP summer project at NIAB was to map the genomes of particular isolates of Zt, trying to locate loci that cause increased virulence on a previously resistant cultivar of wheat called Cougar.

Fungicides are commonly used to prevent the spread of Septoria, with the frequently used ones being azoles, quinone outside inhibitors (QoIs), succinate dehydrogenase inhibitors (SDHIs), and chlorothalonil. However, there are complications which arise through the reliance on fungicides. For example, Septoria resistance to azoles is well documented and the single-site mode of action of QoIs means that resistance can be easily acquired through just a single amino acid change. Additionally, chlorothalonil use has been banned in the UK and EU as of 2020.

Another one of the main methods of controlling the spread of STB is with resistant varieties of crops. The Agriculture and Horticulture Development Board (AHDB) releases a Recommended List (RL) of wheat varieties, including a score for Septoria resistance. One of the varieties that was added to the RL in 2013 was Cougar, sporting a high Septoria resistance score. It maintained its resistance until 2015, when it was noted to have unusually high amounts of disease. It was subsequently removed from the RL in 2016/17. However, due to its initially high resistance rating, it was used to develop numerous other cultivars of wheat, which feature a large subset of the varieties of winter wheat on the current RL (2021/22). This summer, two varieties that have Cougar as one of their parents, KWS Firefly and RGT Saki, were noted to have unusually high amounts of disease on their crops, reminiscent of what happened to Cougar years ago.

To identify potential genomic loci that may be involved with the increased virulence on Cougar, quantitative trait locus (QTL) mapping was used. This links regions of the genome to a particular phenotype, based on the collection of phenotypic and genotypic data from progeny of a cross between two parents of contrasting phenotypes. In this case, two strains of Zt were allowed to sexually reproduce, through co-inoculation on a wheat seedling. One of the parental strains was able to cause disease on Cougar, whereas the other was avirulent on Cougar wheat. Isolates of the progeny from this cross were collected and then allowed to proliferate, following culturing in sterile conditions. 174 of these cultures were used to make spore suspensions to be sprayed on the plants to inoculate them, the concentrations of which were determined using a haemocytometer. Each pot had two cultivars of wheat: Cougar, the test variety, and Gallant, the susceptible control. DNA extractions were also done from the isolates for use in genotyping.

Disease phenotypes were scored 21 and 28 days post inoculation, based on percentage coverage of leaf lesions with pycnidia. Whilst recording the phenotypes it was noted that the isolates that were in the mycelial stage during inoculation were not able to cause any symptoms of disease, even on the susceptible variety, Gallant. Though genotyping data is not yet available, analysis of the phenotypic data shows that around half the isolates that were able to successfully infect Gallant were also able to infect Cougar, whereas the other half were avirulent on Cougar. This suggests that the increased virulence on Cougar is due to a single genomic locus, but only the forthcoming genotyping data can confirm this.

I would like to thank the BSPP for funding this project, allowing me to gain essential research experience, especially following a year full of disruptions by the pandemic, which will aid me in pursuing my future goals. I would also like to thank Dr Anne Webb for supervising this project, as well as Dr Tom Wood and the rest of the Pathology Department at NIAB for their support.

Above: Growth room of wheat plants of the cultivars Cougar and Gallant. The covered pots indicate plants that were recently inoculated with Zt