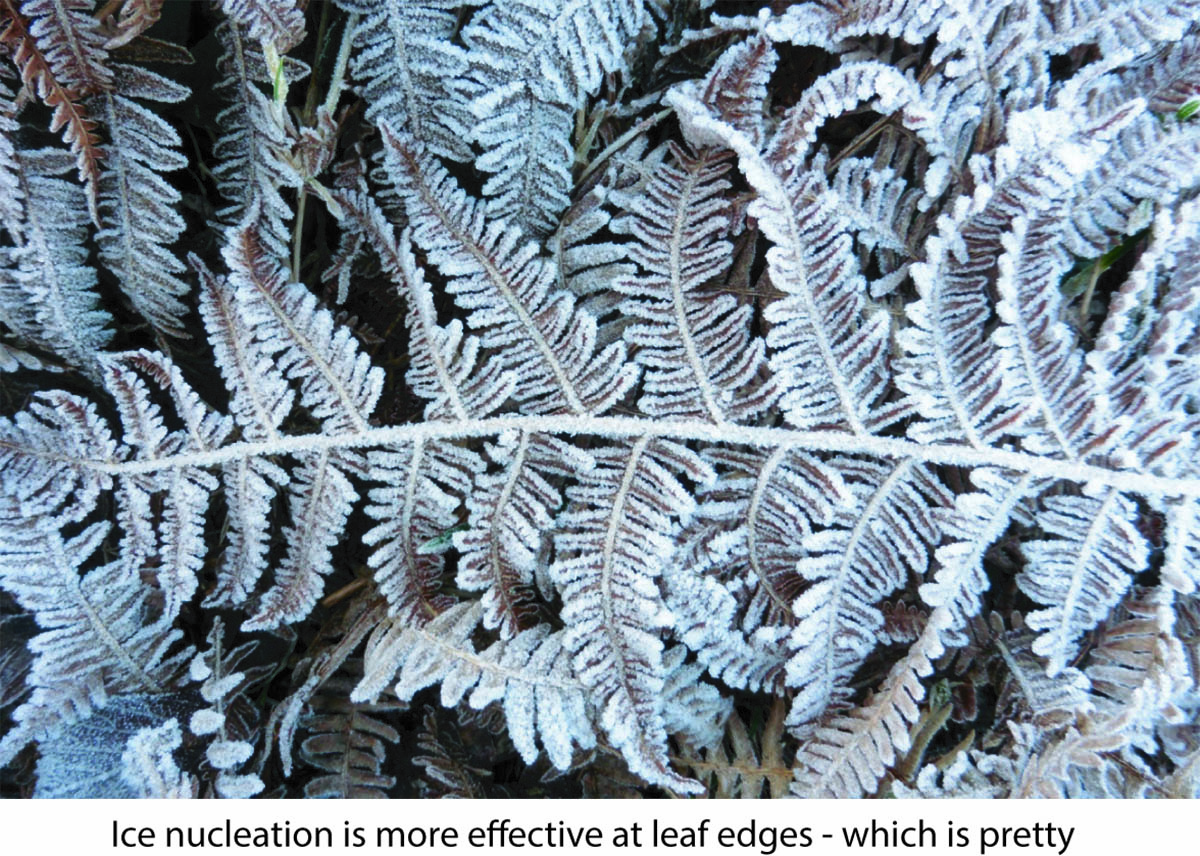 My garden is beginning to show signs of springing to life.  Flowers are popping up: crocuses (croci?), narcissi, Fritillaria (unless that’s a butterfly), strawberries, primroses, and some extremely behindhand winter pansies (what season d’you call this?).  Not bad for a ‘garden’ without any soil, but not a patch on how it looked in November, before the frosts.

A blooming garden in November and March is one reason to be glad to live in Devon.  It may rain 24-7, but frosts are pretty much over – not the case further north!  If you are one of those northern gardeners, tenderly wrapping your azaleas in duvets overnight, then you might be interested to hear that it’s bacteria, not the weather, to blame for nipping your blossoms in the bud.  This is because some epiphytic bacteria, apparently harmless colonisers of leaf surfaces, have developed a devious device: ice nucleation.

It’s accepted fact that water freezes at 0 oC.  This is indeed the melting-point of ice, but freezing is more complex than melting.  Ice develops most easily around nuclei on which crystals can form.  Without these, water can reach -40 oC before spontaneous ice nucleation occurs1.  This is called subcooling. Subcooled water will solidify in an instant if ice nuclei are added (video).  The more ice nuclei, the ‘warmer’ ice occurs.

Ice nuclei have long been known to include biological substances.  Research showed that adding powdered leaf material to live plants led to foliar frost damage at -4 oC, a higher temperature than for untreated plants2.  Leaves can subcool by around 10 oC, and, alone, cannot nucleate ice at -4 oC3,4.  The ice nucleation activity of leaf powder is actually down to bacteria:  frost damage incurred by plants inoculated with ice nucleating bacteria is proportional to epiphytic bacterial population5.  We now know that ice nucleating strains of Pseudomonas and Pantoea

Why should bacteria want to cause or increase frost damage to plant leaves in this way?  Following my twin favourite mantras Nothing in biology makes sense except in the light of evolution” (Dobzhansky8) and ”Just follow the money” (Vimes9), this question becomes: what fitness advantage do bacteria gain from inducing ice formation?  There are two possible answers.

First, frost damage is damage: ice crystals break open cells and puncture leaves.  Such damage could be a selective advantage for epiphytic bacteria if it lets nutrients out or lets the bacteria in, giving access to extra resources.  Since at least some bacteria pathogens, ice nucleation might allow a highly beneficial switch of location and lifestyle.  So, next time a relatively light frost leaves the leaves of your favourite fuchsia flopping, curse the creative microbes responsible for ice nucleation – the blame is theirs.

The second answer is about dissemination to new habitats. Bacteria, like most organisms, must constantly colonise new hosts and environments.  Large-scale travel is plausible for a creature only microns long: their smallness gives them wings.  Turbulent airflow over leaf surfaces lifts epiphytic bacteria into the air10, and once airborne, bacteria can cross continents.  There are estimated to be 1026 bacterial epiphytes on earth7.  That number is so high that if each epiphyte were worth a dollar, they could be used to pay off the US national debt 50 trillion times over.  That’s a lot of potential atmospheric bacteria, ice nucleators among them.  Since ice nucleation is a key step in the induction of rain and snowfall, these atmospheric ice nucleating bacteria can deposit themselves in new areas by precipitation of precipitation.

Recently, researchers have begun to understand that the life a ‘plant-pathogenic’ bacterium is much wider than its occupation of the narrow beam of our crop-protecting attention.  During other moments, the plant-pathogen may be many things: rain-bringer, bio-control agent, competitor, mutualist.  There is much still to learn about the interactions between bacteria and the wider environment – including ecosystem services and earth systems – and how those interactions intersect with our own influences on ecosystems and on bacteria10,11,12.

So, when you next have cause to mourn a frost stricken plant, don’t blame the weather, blame the bacteria.  Go further – blame the bacteria for the weather.  But whatever you do, don’t omit to marvel at these magnificently multi-faceted microbes, and ask yourself how else they might be silently shaping the earth.  Microbes rule!