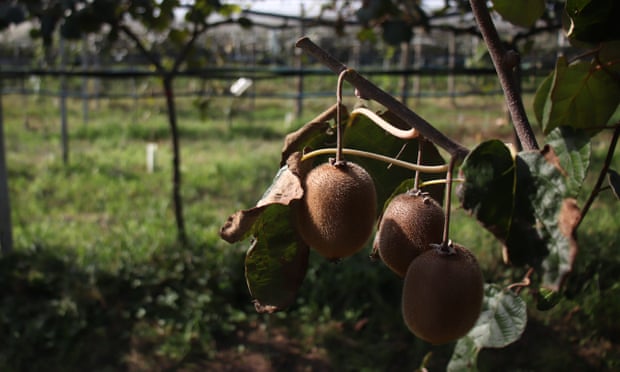 The leaves wither and face down as if to escape the sun; the roots darken and rot. Then the leaves fall: within 10 days, all of them are gone, leaving the fruit under the sun. Within one or two years, the plant dries up and dies. There is no cure.

In Italy, kiwi trees are dying en masse, and no one knows why. Last month, the Italian government announced a taskforce to study a mysterious sickness that is devastating kiwi orchards in the country, leaving scientists baffled. “Damages to production are causing serious suffering to farms,” the agriculture minister, Teresa Bellanova, said, calling the situation an “emergency” and saying the country needs “help from all the experts”.

After breaking out near Verona in 2012, the syndrome, which farmers call morìa, or “die-off”, has ravaged areas where kiwi trees have thrived for decades. Recent estimates suggest that it now affects 25% of kiwi orchards in Italy, the world’s second-largest producer of the fruit – above New Zealand and below China – and is causing losses worth hundreds of millions of euros. In some farming hotspots, the number of affected plants rises to 80%.

Yet researchers say the real numbers could be even higher. Because the syndrome starts in the roots, it can spread unobserved until the first leaf symptoms. By then, the decline is already too advanced. “It’s like the coronavirus, if you will: when the symptoms appear, it’s already too late,” says Gianni Tacconi, a genomics researcher with Italy’s Council for Agricultural Research and Economics (Crea), who has studied kiwi fruit since the early 2000s. “It’s difficult for humans to heal; for kiwi trees, I’d say it’s impossible.”

This excerpt is reproduced from Alessio Perrone at the Guardian, click here to read the full article