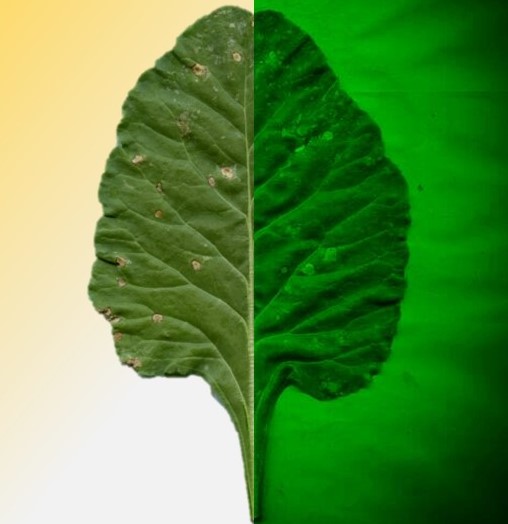 Cercospora beticola fungus is one of the most destructive foliar diseases of Sugar Beet worldwide and deploys a toxin, cercosporin, during infection. A team of scientists have defined a new gene associated with the switch to mass host cell death during plant infection, but in contrast to cercosporin, CbNIP1 activity is triggered in the dark.

“Did you know that the average American consumed 61 lbs (28 kg) of refined sugar during 20191? For consumers globally, approximately one-fifth of refined sugar is derived from sugar beet where it is grown in temperate regions in top-producing countries such as the United States, France, Germany, and Russia. Arguably the biggest challenge facing sugar beet growers is the ongoing battle with the fungal pathogen Cercospora beticola (C. beticola) that causes Cercospora leaf spot (CLS) on sugar beet plants. The annual sucrose losses due to CLS can reach upmost of 50% if disease is left unmanaged. Therefore, to continue satisfying humanity’s sweet tooth, it is crucial to understand the molecular mechanisms that C. beticola uses to cause disease.

C. beticola overwinters in infected plant material left in the field. When environmental conditions are right, the fungus produces spores that travel by wind or water splash. Once a spore lands on a sugar beet leaf, the fungus enters into the leaf and continues growing within. At this stage, the undetected fungus siphons off nutrients from living tissue in a developmental period called the biotrophic phase. After about a week, symptoms begin to appear as spots of dead tissue on leaves that indicate that the fungus switched to killing host cells to obtain nutrients in the so-called necrotrophic phase. To destroy cells, C. beticola is well-known to secrete a toxin called cercosporin that is toxic to a range of organisms including plants. Here, light plays an essential role; not only is cercosporin exclusively produced when C. beticola is exposed to light, but also the toxin itself needs light to kill cells as it is non-functional in the dark.

In a recent article, an international group of researchers identified a new protein that plays a vital role during C. beticola infection. In contrast to light-induced cell death mediated by cercosporin, this new protein called C. beticola necrosis inducing protein 1 (CbNip1) induces plant cell death specifically in the dark. It was found that C. beticola strains that were genetically modified to be incapable of producing CbNip1 (ΔCbNip1 mutants) do not infect sugar beet as well as the naturally CbNip1-producing fungal strain, exhibiting how important CbNip1 is for infection. Moreover, in sugar beet plants infected with C. beticola, the onset of symptom development coincided with maximal CbNip1 production by C. beticola, hinting towards CbNip1 as a driving force for switching from the biotrophic to the necrotrophic phase.  Additionally, 89 C. beticola genomes were analyzed and it was discovered that the CbNip1 gene resides in a genomic location that has experienced a so-called ‘selective sweep.’ This means that within the genomic region where CbNip1 resides, there is pressure for the C. beticola population to maintain this specific gene sequence because it is beneficial for C. beticola’s ecology.

C. beticola may be defying light-associated limitations by using different cell death-inducing agents to cover both light (cercosporin) and dark conditions (CbNip1). By understanding how this fungus achieves maximal destruction, we may be able to find counter strategies to manage this important disease. With proper CLS management, we can tell the fungus to just beet it!”

TITLE IMAGE: Graphical Abstract representing a CLS infected Sugar Beet leaf in light and dark to represent two phases of infection by C. beticola. Used here with permission of the authors © 2020 a U.S. Government work and in the public domain in the USA.