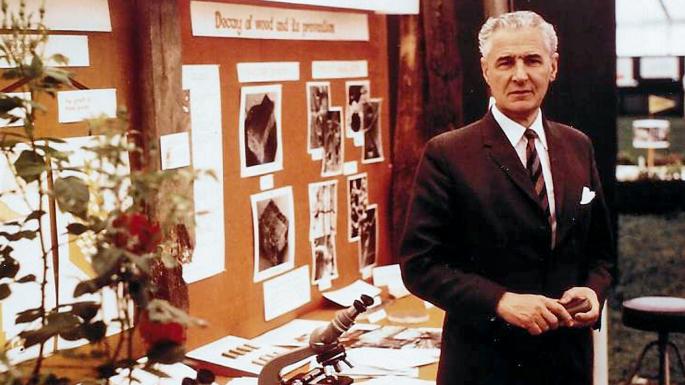 The BSPP was saddened to hear of the death of BSPP honorary member Professor RKS Wood earlier this year.

An obituary can be found in The Times newspaper; https://www.thetimes.co.uk/article/professor-rks-wood-hr9s33rj9.

In May of this year (2017) the plant pathology community lost one of its most prominent members of the mid-20th century. Few plant pathologists of the era could be unaware of Ronald Wood (widely known simply as RKS) through his prolific publication record, presentations at conferences, books and reviews. Starting in the late 1940s Ronald Wood published extensively in botanical and other journals. He was one of the first to address seriously the question of how plants either resisted or succumbed to microbial infection, and the parallel questions about what qualities enabled certain microorganisms to infect a plant whereas others, closely related, could not. RKS was an early advocate of ‘looking under the bonnet’ to study the physiology and biochemistry of the interaction between plants and their pathogens. This became known as physiological plant pathology and was used as the title of his 1967 book, a highly detailed account of the science at that time. More recently the subject has slowly morphed into molecular plant pathology as the tools of investigation have become more sophisticated. The state of the science now allows extremely detailed dissection of the molecular signalling between plant and pathogen but the underlying question being tackled are much the same as those framed by RKS some 50 years ago.