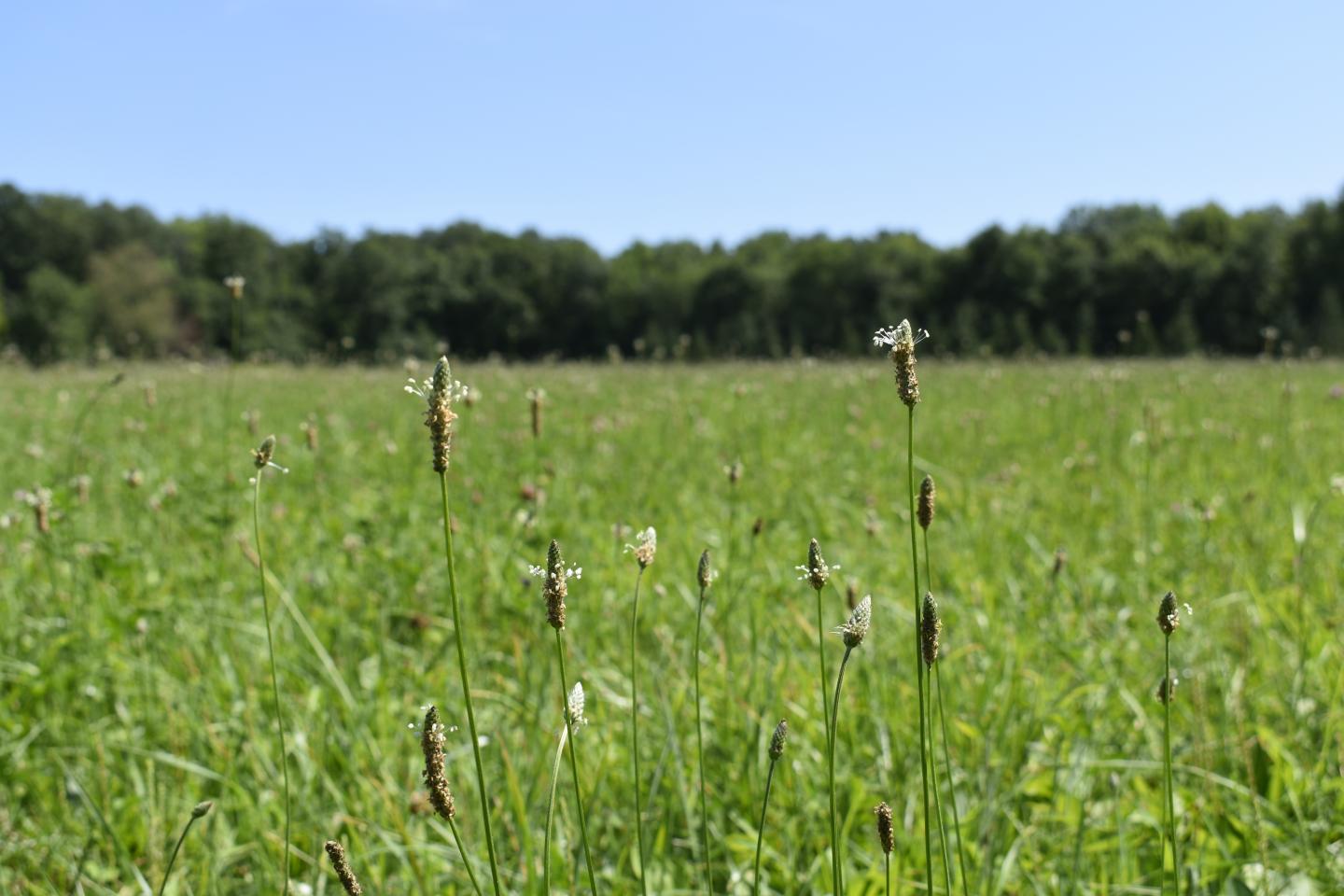 Next time you head outside for a socially distant walk in between your Zoom meetings, notice the rich diversity of plants along your path. As we approach late summer, be sure to also notice the diversity of disease symptoms on those plants, including spots, blotches or fuzzy growth caused by bacteria, viruses or fungi.

A key to surviving in the wild is fighting off infection — and not just once. As in humans, one infection may or may not leave a plant with lasting immunity.

In fact, an early infection might make things worse. New research from an international team including an assistant professor of biology at Washington University in St. Louis shows that infection actually makes a plant more susceptible to secondary infection — in experiments and in the wild. The findings are published in the Aug. 31 issue of Nature Ecology & Evolution.

“We found that early infection facilitated later infection,” said Rachel Penczykowski, assistant professor of biology in Arts & Sciences and co-first author on the study. She performed the field experiments as a postdoctoral researcher with Anna-Liisa Laine, senior author on the paper, now at the University of Zürich.

The findings — obtained through a series of elegant experiments that capture how pathogen strains naturally accumulate on plants over a growing season — reveal the importance of understanding interactions among pathogens when developing strategies for maintaining healthy crop populations.

A common roadside weed, Plantago lanceolata is native to Europe, where this study took place, and Asia; it is also commonly found in North America. Infection by the pathogen Podosphaera plantaginis, a powdery mildew fungus, is easy to spot with the naked eye.

In the wild, plant populations are exposed to and infected by multiple powdery mildew strains over the course of their lifetime. The authors wondered if prior exposure to one strain of powdery mildew affects the plant’s susceptibility to a second.

To simulate what would happen in the wild, the authors took young, disease-free plants and brushed pathogen spores from one of four pathogen strains onto a single leaf per plant. The rest of the leaves were temporarily covered with a plastic bag.

The inoculated leaf was then covered with a spore-proof pouch for the duration of the experiment, which prevented infection from spreading between it and the other leaves. This method works because powdery mildew produces a localized, leaf-surface infection that does not spread systemically in the plant. Otherwise identical control plants received a sham inoculation instead of powdery mildew spores.

The plants were then placed in a common garden environment in a large field (without locally occurring Plantago or powdery mildew), where they were simultaneously exposed to all four pathogen strains.

Penczykowski and co-first author Fletcher Halliday, a current postdoctoral researcher in the Laine lab, found that none of the four strains of powdery mildew inoculated onto plants protected the plants from a secondary infection. In fact, prior exposure to mildew made plants more susceptible to a second powdery mildew infection compared to infection-naïve controls.

“If you look at each strain individually, some of the strains were better than others at promoting later infection,” Penczykowski said.

“Because crop plants may also be exposed to a diversity of pathogen strains during a given growing season, understanding the ways in which different pathogen strains impact each other is important for developing sustainable disease control strategies in agricultural systems.”

To test how prior inoculation affected the probability of plants becoming infected during epidemics in wild populations, the authors inoculated plants as they did in the common garden experiment (again, with uninoculated controls for comparison). Except this time, they moved the potted sentinel plants into wild populations and waited for naturally occurring mildew spores to arrive.

The researchers found that previously infected sentinel plants acquired secondary mildew infections more often than control plants that had never been infected. This was true even though the only way plants were catching the naturally occurring pathogen strains was through the wind.

“What we saw in both our common garden and our sentinel plant experiments was that previously inoculated plants were more susceptible to later infection,” Halliday said. “But could we detect the signature of pathogen strain facilitation in naturally infected wild plant populations? That would require an intensive survey of wild plant-pathogen dynamics.”

And into the wild the scientists went — that is, using data from wild populations that were fortunately collected the previous year.

In an intensive survey of 13 field populations, the scientists tracked mildew infection in wild plants over the course of two months. They tagged plants as they found mildew infection; otherwise, they were not manipulated in any way and had been growing in the field their whole lives.

A small leaf area of each infected plant was cut and brought to the lab to identify the mildew strains that infected the plants at different times throughout the growing season.

The importance of being early

Powdery mildew strains vary in their ability to survive the winter and in the timing of their reproductive cycle.

Some strains arrive earlier in the growing season and are likely to be the ones that had successfully overwintered and reproduced quickly.

Halliday dove into the genetic data compiled from the surveys of the 13 field populations and found that strains detected early in the season commonly facilitated subsequent infections, and strains that arrived to the populations later in the season benefited from that facilitation.

“The early-arriving strains are the ones that are driving the course of epidemics and also affecting the diversity of pathogen strains that assemble in plant populations,” Halliday said.

“In other words, the strains that are ready to hit the ground running in spring may impact both the ecological and evolutionary dynamics of plant-pathogen interactions,” Penczykowski added.